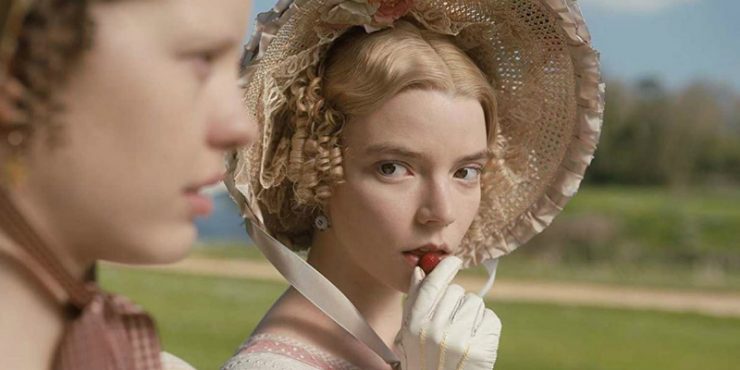 The wits of Jane Austen have graced the movie screen so often, you’d imagine the works have perhaps gone stale. After all, her body of work is not vast as say Shakespeare or Stephen King, and not exactly varied in subject matter. It speaks to both the magic of interpretation and the strength of her work that her appeal has had such sustainability. Even her short epistolary novel, Lady Susan, was turned into 2017’s Love and Friendship, a striking and hilarious comedy of manners that made you rethink Austen, particularly how acidic her stories could be. The latest version of Emma, an incredibly stylish and seductive film, aspires for a similar edginess, though I’m not convinced it actually gets there. Its story is much too tied to sincerity.

That story is of course the one of Emma Woodhouse (Anya Taylor-Joy), an intelligent but maddening young woman who takes no shame in butting into the love lives of her friends and acquaintances. Believing herself a matchmaker, she often mistakes her preferences for fate. Her behavior frustrates Mr. Knightley (Johnny Flynn), a brother-in-law to her older sister who makes frequent calls on Emma and her father, Mr. Woodhouse (Bill Nighy). When Emma advises her sweet but naive friend, Harriet Smith (Mia Goth), to turn down the proposal of well-meaning farmer Robert Martin (Connor Swindells), Harriet does so against her own wishes. Emma plans to instead match her new friend with Mr. Elton (Josh O’Connor), the local vicar.

Her plans and schemes are all self-serving, albeit subconsciously. Emma herself hopes to be courted by Frank Churchill (Callum Turner), a strapping, accomplished young man whose reputation precedes him. While never admitting so, Emma tries to arrange the chess pieces of her life to set things properly, which further rubs Knightley the wrong way. Her plan does not account for some of the film’s characters, like Miss Bates (Miranda Hart), a flighty and talkative woman who is frequently perturbing Emma with her presence. Though no one further unnerves Emma more than Miss Bates’ niece, Jane Fairfax (Amber Anderson), Emma’s much accomplished – and highly praised – peer.

The story further should be familiar to those who have seen any of the other countless renditions from the Gwyneth Paltrow film from 1996 or Amy Heckerling’s classic Clueless. Austen’s characters have such a specific assortment of resentments, spitefulness and whimsies. For this reason, much like Little Women, the work of Austen is pretty full-proof against poor adaptation. Emma‘s script is written by the Booker Prize-winning novelist Eleanor Catton, who takes little liberties with Austen’s work, and instead further leans into it. Catton and debut director Autumn de Wilde have obvious affection for the material, lavishing such strong attention on the words and images through lush cinematography (Christopher Blauvelt) and precise editing (Nick Emerson).

With this role, Anya Taylor-Joy is finally able to escape her string of distressed horror movie victims, proving herself able to do more than her known stable of frightened glances. Furthermore, Mia Goth’s Harriet Smith is a far cry from Goth’s unsettling characterizations in darker films like High Life and Nymphomaniac. De Wilde’s direction, which is very style-focused, still leaves room for strong ensemble performance, as the entire cast give the film great charm and wit, with special notice to Hart and Nighy who both are able to achieve a terrific balance of humor and melancholy in precious little screen time. This version of Emma has an aggressive way about it, as if to insist its twenty-first century appeal. As mentioned, it isn’t nearly as ruthless as Whit Stillman’s Love and Friendship, and in that comparison it falls short. But Emma is still scrumptious in its construction and execution. A film quite aware of its timelessness, while still paying credence to the time that it has come out in.