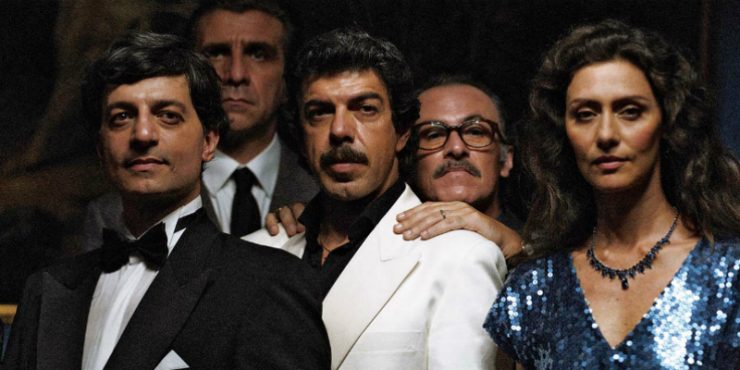 There’s a degree to which The Traitor understands how the movies have a large responsibility toward the connection people make between Italians and organized crime. In telling the true to story of Tomasso Buscetta (played wonderfully by Pierfrancesco Favino), director Marco Bellocchio is also recalling a cinematic history that has explored how Italy has become contaminated by corruption, in both its legitimate and illegitimate enterprises. Fellini, Rosselini, Visconti, even Scorsese and Coppola, are given slight notices in this epic crime drama, that seeks to tell the story of a criminal whose ideas of organized crime were built on principles of integrity. His collaborations with Italian authorities led to hundreds of arrests and convictions that would cripple the notorious Cosa Nostra.

Despite his reputation and status, Buscetta never ascended above a “simple soldier” within the Cosa Nostra, with his pursuits of women and other immediate pleasures taking more precedent over his pursuit of power. With the heroin trade growing throughout the mafia in Palermo, Buscetta feels the morality of his profession buckling. The rise of drugs also correlates with a rise in greed, and as a more ruthless Don, Totò Riina (Nicola Calì), begins to gain more power, Buscetta feels it’s a good time to finally leave Palermo. Part of what he wishes to leave is his oldest son, Benedetto (Gabriele Cicirello), whose life has been consumed by drug addiction. Seeing his son as a sunken cost, he decides to move to Brazil with his newest wife, Cristina (Maria Fernanda Cândido), to start a new, cleaner life.

Buscetta entrusts the safety of his two oldest sons with another crime boss, Pippo Calò (Fabrizio Ferracane), while he finds success in South America with a new identity. Back in Palermo, Riina’s hunger for influence and power reaches dangerous levels, as he attempts to clear Palermo of all rivals. The bloodshed becomes difficult for Buscetta to ignore, even as he lives half a world away. When Brazilian authorities arrest Buscetta, a long sequence of torture precedes a final decision to collaborate with an Italian judge, Giovanni Falcone (Fausto Russo Alesi), who wishes to clean out all of the corruption from Palermo. Initially skeptical, Buscetta comes around to Falcone. The judge confesses ambitions to not only bring down Cosa Nostra, but to eliminate wrongdoing in Roman politics, which sits at the roots of violence throughout Italy.

Bellocchio follows Buscetta over several decades, from his opulent Brazilian life to his dreary days moved around the United States in various, non-glamorous witness protection homes. The years tick by ferociously, as the state’s star witness becomes pentito, which goes beyond the rats and snitches in American crime films. Buscetta’s character is consistently and heavily attacked by Riina and Calò, who decry him as a liar. Buscetta’s message stays the same, uncompromising in its clarity. Buscetta, himself a murderer and criminal, seems to have never forgiven the Cosa Nostra for its succumbing to the drug trade and selling out its honor, but in quieter moments, Buscetta regrets his own participation in mafia activity. More than anything, he is haunted by the murder of his sons, who were killed while he tried to forget them in Brazil.

The Traitor is an incredibly stylish film, with a score by veteran Italian composer Nicola Piovani pumping the film with an unmistakable energy. The performance from Favino is expertly textured and dominant, a perfect balance between unflinching authority and constant latent paranoia. The film follows a lot of familiar cinematic rules for contemporary crime epics, and The Traitor‘s meditations on mortality is not the only thing it has in common with The Irishman. Its violence is immediate and brutal, but it is more preoccupied with tedious procedural details and the absurd inefficiencies throughout the Italian legal system. The circus that develops from the state’s case against the Cosa Nostra draws attention to Italy’s foundational issues that go beyond organized crime, which is The Traitor‘s central point: the mafia tradition is not Italy’s most dastardly institution.