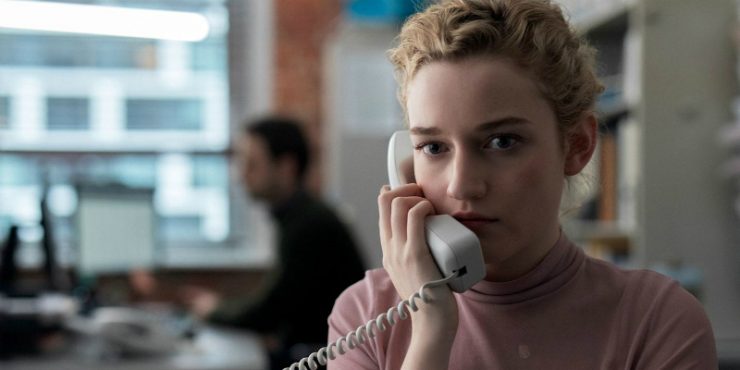 Labelling Kitty Green’s The Assistant as a ‘#MeToo Movie’ suggests that her latest film is somehow attached to a trend as opposed to a glaring document of longstanding tradition. The film takes place in a Manhattan film production office. We don’t know much about the films they produce, but the various posters we see on the walls suggest a certain importance, the possibility of prestige. Our main character – an entry-level assistant/receptionist named Jane (a profoundly good Julia Garner) – is often told how lucky she is to have such an opportunity. Most of the time, she does not feel lucky. Oftentimes, her job consists of dodging emotional landmines and trying to escape the day without a form of verbal assault.

These attacks are likely to come from the head of the production company, which the film keeps completely out of sight. His figure casts a long, frightening shadow, and it becomes obvious that all of the company’s employees, no matter their rank, has a measure of fear of coming face to face with his notorious rage. His behavior creates a disturbing trickle-down, where the entire office finds itself vacillating between rationalizing away his behavior and using the same intimidation tactics to protect him. Being the newest hire, Jane is placed at the bottom of this toxic totem pole. She has no one underneath to recycle her own frustrations upon, and become’s the receptacle for everyone else’s vitriol.

Jane’s job requires her to open the office before the sun has risen and leave well into the night. Being the first to arrive and the last to leave is not uncommon. She’s been at the office over a month, which is long enough to fully understand the seriousness of her boss’s behavior but not nearly long enough to complain without substantial blowback. Without a moment’s hesitation, her fellow office workers will reference her naiveté, especially the office’s two other assistants (Jon Orsini and Noah Robbins), who either don’t see or choose not to see how their vantage point as men makes their experience completely different from Jane’s. Even a meeting with an HR representative (Matthew Macfadyen, in one killer scene), quickly moves from concern to agitation to veiled threats. Jane is often reminded how foolish it would be to squander her rare position.

Writer-director Kitty Green paces through The Assistant‘s story briskly. With cinematographer Michael Latham, she composes slick, detail-oriented shots, often shooting directly from the ceiling to present the variety of tedious responsibilities that Jane has – when she’s not stranded at the copy machine printing script pages and headshots, she’s expected to perform low-level janitorial work for her boss and other higher-ranking executives. Green edited the film with Blair McClendon, building a tension within the static nature of her strict camera placement, which benefits the film’s rolling-downhill tempo. The film’s clean but modest approach – music by Tamar-kali is absent until the film’s final moments – does a lot toward exposing the normalization of inappropriate behavior and the effort put forth toward keeping up appearances.

This is Green’s first fully narrative film, though her documentaries often toed the line between reality and performance. In The Assistant, the fiction bristles with rough touches of reality. The major plot points all lie within the both the micro-aggressions seen on screen, and the explicit violence that is frequently hinted at off screen. That is to say, there is not a whole lot to actually see throughout the film, which actually plays to the argument against out-of-sight-out-of-mind rationalizing. Jane’s instincts tell her that her workspace is not acceptable, even while close to a dozen people a day try to assure her otherwise. She has ambitions of her own, she hopes to become a producer. “We could use more women producers,” someone tells her at one point, while ignoring the misogyny around them.

The Assistant – in such a brisk 85-minute run-time – is incredibly intelligent about patriarchal power dynamics, how they effect and corrupt all genders, while still making particular victims out of women. The degree to which people, even Jane – especially Jane – are afraid of speaking this person’s misbehavior into existence highlights a broken system where a person’s unhinged version of reality is further and further legitimized by silence. To say the film is about Harvey Weinstein neglects the presence of all the other Weinsteins still out there, which is what Kitty Green seems particularly interested in. It is not about cutting out those who have been publicly revealed, but about rebuilding an entire ecosystem to prevent so many from keeping quiet.

Written and Directed by Kitty Green