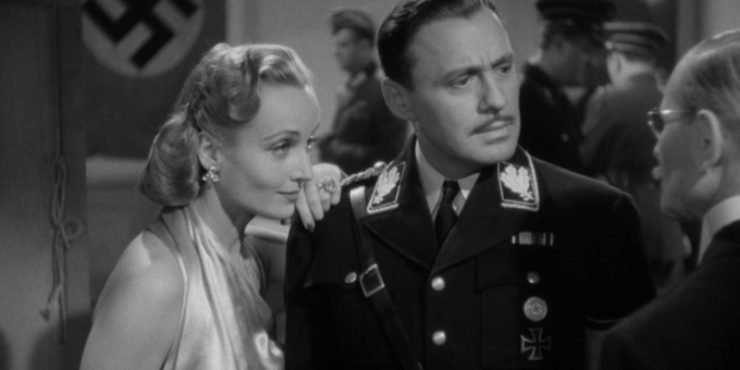 Considering the polarizing response to Jojo Rabbit less than a year ago, you’d probably think that To Be or Not to Be would be perhaps a bridge to far for audiences sensitive to dark comedy involving Nazis (and the history books will tell you: upon its release in 1942, it was considered to be in “bad taste”). And yet, the infamous film from Ernst Lubitsch smashes the concept of “tragedy + time” into pieces. Released within the darkest period of World War II, To Be or Not to Be is a wistful screwball comedy of mannerisms and behavior. A romantic comedy that has little faith in the romance at its center, and a wartime satire that makes hay out of the villain’s lack of conviction. In the rouse of Dr. Strangelove, To Be or Not to Be makes no argument for laughing away the pain, but more specifically, it argues that it is the painful thing, in and of itself, that is so hilarious.

Jack Benny and Carole Lombard play Josef and Maria Tura, a married Polish couple who also share the stage of the most famous theater in pre-World War II Warsaw. As the theater prepares for a new play – a drama criticizing the rising Nazi party and its leader, Adolf Hitler – they make their money with slapdash performances of Hamlet. The highly vain Josef becomes disturbed when every time he begins his ‘To Be or Not to Be’ soliloquy, a young soldier gets up from his seat and walks out on the performance. Little does he know that the soldier, Stanislav Sobinski (Robert Stack), is actually taking that time to visit Maria in her dressing room. The flighty dalliance happens right under Josef’s nose, though all he’s concerned about is the effectiveness of his performance.

The fun and games cease after Hitler’s Germany invades Poland and brings the country under the control of his authoritarian regime. The theater is closed and Sobinski is off to England to fight for the Allies in an effort to save his home country. In his efforts, he meets Professor Siletsky (Stanley Ridges), a member of the Polish resistance who is actually a Nazi spy. Siletsky gets entangled in the affairs of Sobinski and the Turas after the young soldier catches wise about the professor’s true allegiances. Maria is called to Siletsky’s office behind Third Reich walls and commissioned to begin her own spy work. Maria agrees, but only to record information for the resistance. When Josef learns of her actions, his vanity and jealousy get the better of him, and in an attempt to save his pride, he also joins the spy network, adding to a complicated but hilarious web of double and triple agents.

The film was released a month after Lombard’s tragic death on January 16th, 1942. That she was killed in a plane crash after raising millions of dollars in war bonds for the American military adds a significant layer of gravitas to her Maria Tura, who playfully but sincerely volunteers herself to breach Nazi rank to help save Poland. In fact, Lombard’s performance was the only thing that critics agreed to praise when the film was originally released, no doubt believing that the only thing more in “bad taste” than a Nazi comedy being to pan a recently deceased movie legend. Their analysis was not wrong, though. Lombard, already a veteran of screwball comedy, is absolutely brilliant in To Be or Not to Be, playing perfectly off of Benny’s egotistical Josef, delivering piercing dialogue with an alacrity that she perfected throughout her career.

This film comes late in the legendary Lubitsch’s career, five years before his death and many decades after he’d established himself as a total master of comedy and performance. The fanciful and dainty nature of To Be or Not to Be alleviates tension while never detracting from suspense. He is utilizing laughs the way Hitchcock would eventually use discomfort; only through the genteel nature of his storytelling does the real nature of his message come through. Both Jewish and German, the pitfalls of World War II and Nazi Germany could have been a blackhole for Lubitsch, had he decided to walk a path of respectability. He certainly defangs Nazi soldiers, presenting a parade of buffoonery throughout the Third Reich, with generals living in so much fear, they could hardly instill fear in others.

The criticism, if there is any, is instead aimed at his heroes: the troop of actors who witlessly become enlisted in the cause, and only through pure self-preservation come up with a plot to save the day. Josef’s jealousy of Maria and Sobinsky sends him straight into the crosshairs of the Nazis, while Maria makes no complaint about using her own alluring nature to entrap Siletsky. The two protagonists are perfect for each other, expertly calibrated to each other’s vanities and duplicities. To Be or Not to Be shows how often the personal and the political can be interchangeable and how, faced with crisis, our performances of ourselves can be the difference between life and death, especially under a historically vicious dictator. Lubitsch has no ill will towards his stars, but he constructs their hypocrisies expertly into the story.

To those who still think that Lubitsch is not serious enough about World War II should consider the character of Greenberg (Felix Bressart), a Jewish member of the acting company who dreams of getting his moment on the stage, only to be assigned roles of background action. He dreams to perform the character of Shylock from The Merchant of Venice, and often recounts the character’s famous soliloquy (“If you prick us, do we not bleed?”). Greenberg gets his moment to perform, within the film’s stirring climax that tracks a raucous escape right under the nose of the Nazis. Greenberg’s performance is the film’s emotional high point: a Jewish man making the case for his own humanity directly to a group of Nazi soldiers. It’s a moment that’s still funny within the context of the plot, but on a more macro level, it is so much more than that.