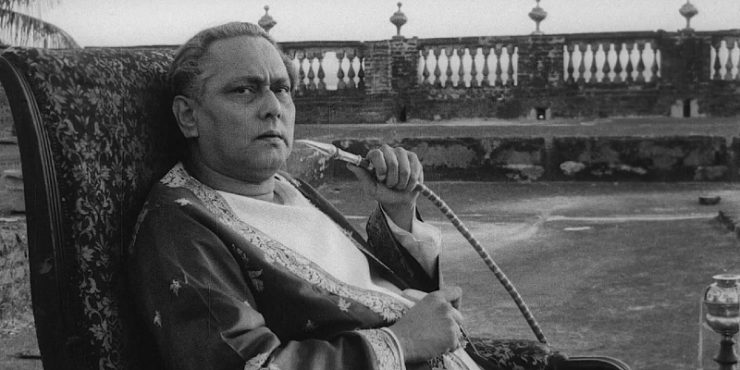 One of the many joys to be found in the films of Satyajit Ray is his ability to delve into the humanity of his characters without judgment. His style is clear and aspires toward objectivity, while still existing within a very consistent moral milieu. Humanity is his #1 interest, but a lack of humanity will always get its comeuppance. The Music Room is about a careless landlord played by Chhabi Biswas whose preoccupation with decadence causes him to lose many things: his shame, his money and even his family. His main vice is holding opulent recitals in his grand music room, the centerpiece of his royal palace. The recitals allow him to show off his grand wealth and solidify his authority in his region. His swelling pride mixed with his addiction to status brings tragedy to his front door.

Biswas plays Biswambhar Roy, a Bengalese zamindar (landlord) who has done little upkeep to his properties and paid little attention to the living conditions of his tenants. Perhaps by design, The Music Room almost never leaves Roy’s expansive, foreboding palace, mirroring the zamindar’s own obsession with staying inside. Far from agoraphobic, Roy is instead so tantalized by the grandiosity of his own home – and hypnotized by the performances he hosts in his music room – that leaving for any reason feels superfluous. With the value of his properties going down, that leaves less money for Roy to indulge in his favorite activity. Even after the protests of his wife (Padma Devi), he does little to curb his behavior, and begins mortgaging family heirlooms to pay for performances and invite numerous guests.

The Music Room is equal parts condemnation and appreciation of Roy’s lifestyle. Satyajit Ray presents Roy’s shortcomings so matter-of-factly that it’s difficult to argue with him when he presents the majesty of the music that is performed in the music room. The film’s performances – most famously from Begum Akhtar, whose song and dance sequence near the end of the film is the best and most famous of the bunch – are allowed to go on and on, fleshing out the length of a relatively thin plot, and allowing us to understand the power this music has over Roy. Music is an important element in all of Ray’s films, but The Music Room makes the music a character in and of itself; and a persuasive character it is, successfully arguing for itself in the face of Roy’s carelessness.

There is a foil to Roy’s obtuse zamindar, who comes in the form of Mahim Ganguli (Gangapada Bose), a neighboring business man who brings not only a rival to Roy’s regional supremacy, but also an influx of industry and modernity. Used to being treated like royalty (in fact, many characters including Ganguli refer to him as “king”), Roy is threatened by Ganguli’s presence and possible influence. When Ganguli begins hinting at throwing his own celebrations, even holding recitals in his own music room, this motivates Roy unlike anything else. Pushing against the wishes of his wife and his stewards, Roy spends money that he doesn’t have in order to upstage his new rival, in a quixotic effort to slow the path toward progress. Ganguli’s “self-made” status is not yet as socially heralded as Roy’s inherited position, but anxiety builds with changing times.

In all of Ray’s films, actions do come with consequences. Roy’s obsessions lead him to lose it all. A sort of Bengalese Charles Foster Kane, too focused on affluence and personal gain, to see everything falling out beneath him. The wife and son (Pinaki Sen Gupta) for whom he creates such a grandiose, superficial appearance, are the very people who end up falling victim to his vanity. Fate is always a factor, but like other Satyajit Ray characters, Roy’s fate is formed by his foibles. Left alone, living within the stark walls of his crumbling palace, Roy can only speak to the power of his bloodline, an array of dead fathers, grandfathers and great-grandfathers whose image he means to reflect. Their towering portraits are the only family he has left.

That Ray allows us to empathize with Roy’s predicament is what separates him as one of our great cinematic artists. Ray does not ask us to shed a tear for the highly irresponsible man, but he does allow us to understand his logic, however illogical it might be. As Roy shouts of the importance of his bloodline, we know that by this point he has reached the end of his rope, close to a death that will be much lonelier than he had planned for. But when Ray allows us to be consumed by the performances from Akhtar (as well as Basmillah Khan, Ustad Waheed Khan, Roshan Kumari, among others), we become transfixed as well. For a moment, we understand the level of grace that Roy has reached within the walls of his music room, and you could understand why someone would work so hard to reach that level of grace again.

Written and Directed by Satyajit Ray