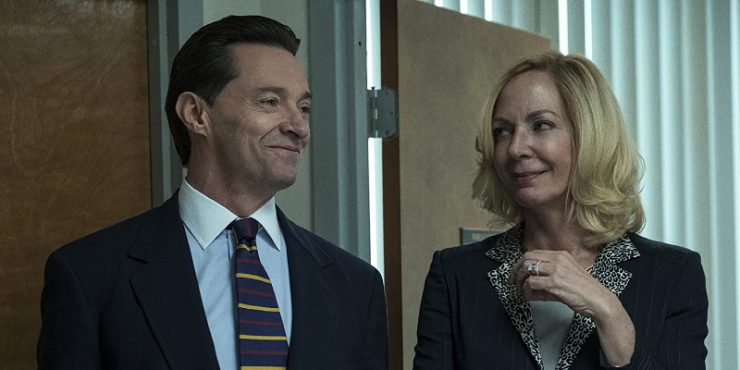 Bad Education premiered on HBO Sunday night, 4/26/20. It is now available on HBOGo and HBONow.

There was controversy when HBO snatched up Bad Education in the bidding war that followed its successful premiere at last year’s Toronto Film Festival. There was brief mourning when one of the most beloved films of the festival would be relegated to being a “television movie”. Fast forward to April, and Bad Education gets a release on America’s preeminent premium cable network while most independent films find themselves with no proper distribution thanks to Covid-19. With more people home then ever before, it’s hard to imagine Bad Education having a bigger (or more ready) audience.

The film is based on the true story of “America’s biggest public school embezzlement scandal” in 2004. If that sounds niche to you, then you won’t be surprised to learn that the story is filled with all sorts of odd characters and peculiar details fit to a crime as particular as this. One might recall last year’s scandal regarding Hollywood actresses and their participation in a college admissions scandal; and you’d realize how often these crimes in academia come down to vanity. With last year’s news, the vanity was of upscale parents too proud to send their children to unremarkable universities. In Bad Education, we see that the vanity extends into the schools itself, into the officers, administrators and even occasionally the teachers.

The script is by Mike Makowsky, who himself was a student in the Roslyn School District during the controversy. Tucked within one of the more affluent suburbs of Long Island, NY, Roslyn saw a period of meteoric progress during the tenure of superintendent Frank Tissone (played here exquisitely by Hugh Jackman). A former English teacher, Tissone transformed Roslyn from middle-of-the-pack to near the top of New York’s districts, with a perfected mixture of well-manicured grace and otherworldly commitment to individuals. All people – parents, teachers, students – felt secure under Tissone’s watch, and his success reflected itself in Ivy League college admissions and soaring local property values.

Which is why no one was very eager to ask questions about the school’s spending habits. Roslyn’s business manager – and Tissone’s closest associate – Pam Gluckin (Allison Janney in a performance so within her golden standard, it’s like she’s on autopilot) is a bit fast and loose with her business card, unafraid to use it to fund home improvement projects or to buy Christmas gifts for her niece. When she becomes a bit too lax (exactly how is too funny to reveal here), her spending alerts the attention of Bob Spicer (Ray Romano), the School Board President. Bob’s discovery reveals a shocking amount of theft, so much so that he decides to alert the entire school board, as well as Frank Tissone.

How Frank and the board address the issue probably won’t surprise many. Suffice to say that their initial indignation quickly gives way to cloak-and-dagger moves of self-preservation and cover-up. Pam Gluckin is dispatched as quietly as possible and is made to take sole blame for the embarrassment. Maintaining the district’s reputation is valued over revealing misbehavior to the public. But with alerted eyes, concerns arise and pressure begins to come from the most unexpected place: the Roslyn High School newspaper. Rachel Bhargava (Geraldine Viswanathan), a curious underclassman, decides to do serious reporting on the district’s elaborate construction of a Sky Walk on her campus. Digging through the public records of the district’s spending, she learns what everyone else will eventually: there is a massive crime.

Makowsky and director Cory Finley (2017’s Thoroughbreds) construct the film as an ensemble of characters each tinged with calamitous flaws that undermine their moral core. Trusted civil servants cannot help but gift themselves lavish kickbacks under the rouse of good work, leaders hide their true identity in fear that their authority will be compromised, and parents entangle their children in misconduct that was initially done for their benefit. The school district, awarded and cheered for its superlative achievements is revealed to be a patch-job, held together with cosmetic bravado. Good intentions are dashed by self-interest and ethics are shelved for the advancement of appearances.

Thematically and stylistically, this film recalls Alexander Payne’s Election, America’s most biting satire of the social politics that plague school systems. That film also dealt with people who are upfront with their virtues and less revealing with their secrets. Payne crafts a much more biting satire, more cynical about the inherent nature of its characters (of course, Election isn’t based on a true story). Its fangs are sharper and cut deeper. Bad Education is rampant with spry humor, and Finley’s highly subjective filmmaking will tell you just how he feels about these dastardly figures, even if it does occasionally reveal flutters of sympathy for the tragically fallen.

This is probably epitomized in the work from Hugh Jackman, which is so far and away from his more comfortable arenas (flamboyant song-and-dance man or neck vein-popping action star), one could maybe question his casting until you see the performance itself. Frank Tissone taps into elements of Jackman’s movie star persona one would have never guessed the Australian actor was ever interested in exploring. Playing a man desperate to hide the truth, Jackman confronts much public speculation – both about his personality but more specifically about his sexuality – in a way that turns Frank from a two-faced criminal and into a truly tragic figure. Easy to laugh at, but also easy to understand. His performance embodies the film’s themes of more innocent human failings spiraling into ignominy.

Makowsky’s script obviously feels the windfall of faith that rippled throughout Roslyn’s school district, learning that even the most beloved authority figure can fall victim to his own lack of integrity. The crumbling of a communal trust, while it emboldens the whistleblowers, may darken group morale. The stakes are perhaps not as high in a Long Island school district as they are in, say, a nation trying to withstand a pandemic. Either way, the unmasking of shame-faced authority figures can be funny until it isn’t, and Bad Education does understand that humor can only do so much to supplant the damage done.