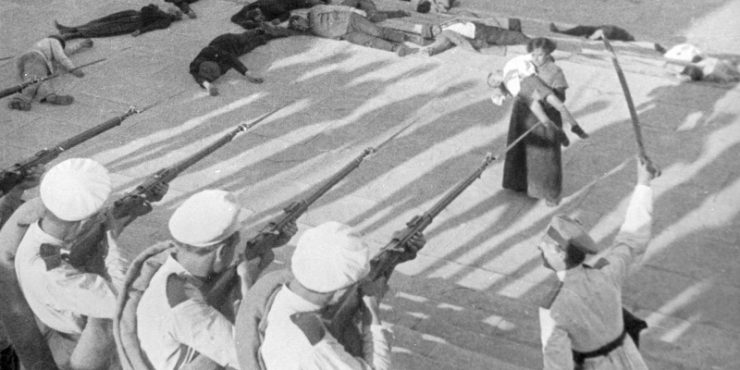 Sergei Eisenstein’s association with evolution in film editing is well-chronicled. He and his Soviet peers established the foundations of “montage” as a technique to rouse emotion within the audience, and Battleship Potemkin is often sighted as Eisenstein’s premier achievement. As propaganda, Potemkin is a stirring call-to-arms, a collective shout of solidarity for all working class people. Commissioned by the Soviet government in celebration of 20th anniversary of the 1905 Russian Revolution, the film proves that stories about revolution are more likely to be remembered if they are revolutionary in and of themselves. There isn’t a course in Film History that doesn’t include Potemkin and its innovation in film editing, but it is Eisenstein’s connection to the story’s people that helps it endure and establish that place in history.

The script by Nina Agadzhanova has no interest in parsing the agonies of the bourgeois or their motivations in exploiting the working class. There is no Tolstoy-like dissection of tormented aristocracy, equipped with rationalizations and self-loathing. The disdain for the elite is as clear as the sympathy for the proletariat. Like many great historical retellings, Potemkin focuses on an isolated incident and extrapolates its meanings on larger, more sweeping events. A warship in 1905 is filled with sailors fed up with the treatment from their officers and admiral. Expected to eat meat infested with worms and to endure emotional and physical abuse, the group decides to stand up for themselves, inspired by the revolutionary actions being taken by their brothers on the mainland. When the authorities on board respond with threats of violence, the sailors decide to stand together, using their strength in numbers to argue for their own humanity.

The story is based on a real-life mutiny on the Potemkin, one of many events which pushed Russian society against the oppression of the Tsarist regime and into the Communism of Lenin. Meant mostly to be a film that celebrates communism unabashedly, Eisenstein proves to be shrewder than your average government-commissioned filmmaker, presenting the actions as a triumph of people rather than a triumph of ideas or political parties. This is a standard tactic in propaganda, but Potemkin‘s affections are certainly in earnest, showcasing a compassion and resiliency in human nature that is not always present in Communist or Soviet filmmaking. His motivation in producing propaganda comes from an obvious belief that this is what is best for the population he loves.

Not that the film itself is without tragedy. The Potemkin mutiny leads to vicious acts of brutality and cruelty, most famously demonstrated by a sequence on the Odessa Steps, where a group unarmed civilians are surrounded and shot at by Cossacks. The chaos of this scene – not only the centerpiece of the film but a cornerstone of political art – is built upon the precision of Eisenstein’s vision. In its buckshot cutting, we’re presented with the illusion of touching base with every soul on those steps, experiencing the individual, unique impact of the violence; and that variety creates a solidarity between them and the audience. There are volumes written about Potemkin‘s contributions to the art of film editing, but less so about the political passions that bred it.

I understand complicated feelings about Communism in contemporary society, and furthermore, I can see how Battleship Potemkin‘s heroic portrayal of communist stirrings can feel peculiar in 2020. But there should be no qualms about Eisenstein’s moralities, and there should be no misunderstanding his expertise in what truly plagued pre-Soviet Russia. Perhaps the most provocative part of Potemkin is the flourish of anti-semitism and, inversely, the corruption of Christian society that pushed Russian aristocracy against the working class. The images are resolute and unmistakable, subtlety sacrificed for the message of righteousness. These are not simply religious or economic issues, but instead ones that take on a much larger scope of humanity.

In the film’s final sequence, Potemkin tensely prepares to defend itself against a separate military squadron. After the tragedy in Odessa, further violence is unwanted but expected. Another montage unveils as we’re subjected to a detailed procedural of the ship’s preparations. The crew moves in lockstep, much like the industrial machinations within the ship, presenting a triumphant symbol of solidarity as the squadron approaches. Potemkin ends with the squadron allowing the rebel ship to pass, endorsing their journey toward revolution and their fight against oppression. The joys of brotherhood surpass tyranny, and for a brief moment, the horrors of the moment appear to be at bay. Potemkin‘s reputation as a film of technical accomplishment can often overshadow its narrative success, but that is not the fault of Eisenstein. This is a human picture.