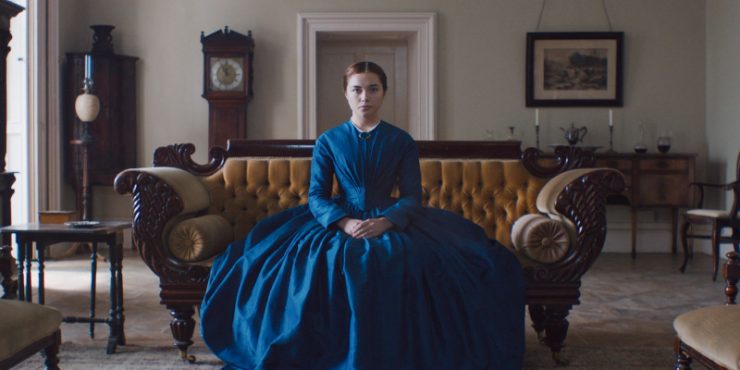 In a short amount of time, Florence Pugh has shown herself to be a multifaceted talent as an actress. In half a decade, she’s shown an incredible range from her Oscar-nominated Amy March in Little Women, to her depiction of the wrestler Paige in Fighting With My Family, and her emotionally abused Dani in the harrowing Midsommar. Her break out was Lady Macbeth, a brutal piece of Victorian-era Gothic, which came out in 2016. The film deals very little with Shakespeare, and is in fact an adaptation from the Russian author Nikolai Leskov (a fact that, when learned, helps make sense of everything you’ve seen), and despite its period setting, proves to be a fierce, violent film, both in passion and in blood. It’s Merchant-Ivory and Stephen Frears by way of Quentin Tarantino.

Lady Macbeth proves to be another one of those Pugh performances that can startle you with its maturity. Indeed, a lot of the excitement in watching her can come from the contrast of how assured her work is and how young she looks. Translating internal emotion doesn’t appear to be difficult for her, and her versatility goes a long way toward showing that she can do it within a multitude of characters. In Macbeth she plays Katherine, a young wife with a much older husband (Paul Hilton) who shows little interest in her. Her father-in-law (Christopher Fairbank), unaware of his son’s behavior, is furious with her apparent unwillingness to provide an heir. She is told to stay inside at all times, to isolate herself away from others, and to always stay ready to perform her duties as a wife.

We see quickly that Katherine has very little interest in what her husband and his father have planned for her. When they are both away for business, she takes advantage and enjoys the fresh air outside. In her explorations, she meets Sebastian (Cosmo Jarvis), a gruff and forceful groomsman on her property. She contrives reasons to be in Sebastian’s presence, and before long they begin a passionate love affair. This vexes Katherine’s housemaid, Anna (Naomi Ackie), who is shocked not only by Katherine’s behavior, but also with the shameless manner with which she does it. With the men of the house scheduled to arrive back at home, Katherine begins conceiving plans to free herself from her loveless marriage and her dastardly father-in-law, but it’s a plan that will leave many victims in its wake.

Director William Oldroyd and screenwriter Alice Birch craft a world here defined by its cruelty, a cruelty that just begets further cruelty. Everything, even the love affair is tinged with a cold disdain. Characters jockey for power positions amongst themselves, utilizing racism, sexism or classism whenever it proves to their benefit. Oldroyd frames his scenes in wide, formalist images, the characters usually looking into the camera, the walls often a bare canvas for which they can fulfill their odious natures. The cyclical nature makes it so that the women and the people of color throughout the film end up coveting the very oppression that abuses them. There doesn’t appear to be any language of empathy among them, and they’re all motivated by an evil masquerading as self-preservation.

Naomi Akie’s Anna is perhaps the story’s only true innocent, which is perhaps why she manages to get mistreated by every character in the story in ways that are humiliating and dehumanizing. If the film had any real interest in the racial dynamics of Nineteenth Century provincial life, they would have made her the main character. Instead, Oldroyd focuses his story on the ruthlessness of Katherine, which only grows as the film unfolds, making victims of everyone around her. Her tale of revenge becomes a tale of love but then it comes right back around again, enveloping her in a devastating cycle of isolation. Watching this, I was compelled to think of how fitting this material would be for a director like Michael Haneke, whose chosen modes of cruelty always find a way to include morbid humor. Oldroyd provides none of that here.

Even at less than 90 minutes, Lady Macbeth‘s story feels stretched thin. Shedding itself of any narrative complications, it instead pushes forward with its story, unimpeded, Katherine’s soul blackening with each subsequent scene. The strategy neuters suspense and scuttles surprise, even in the film’s more shocking moments. Brutal death sequences are presented without much fanfare, and the film continues on, business as usual. I guess that’s the whole point. I’m not convinced it’s very effective. Punishing stories can become parables, which is where the Shakespearean aspect comes into play. Lady Macbeth eschews that for dull pain, devoid of moralizing or excitement.

Pugh’s commitment, both to the role’s physicality as well as the bleakness of her character, makes something compelling out of the film’s protagonist. Katherine is an underestimated woman who proves to be the most dangerous person in a very competitive room, but with all the evil swirling around her, it leaves her anti-hero without much of a foil to push against, and it puts Lady Macbeth in a rather nihilistic place. The film can leave you feeling quite calloused and morose. One may find themselves asking what, exactly, is the point? If the idea is to inform us that the world is a terrible place, there are much better movies to get that advice from.