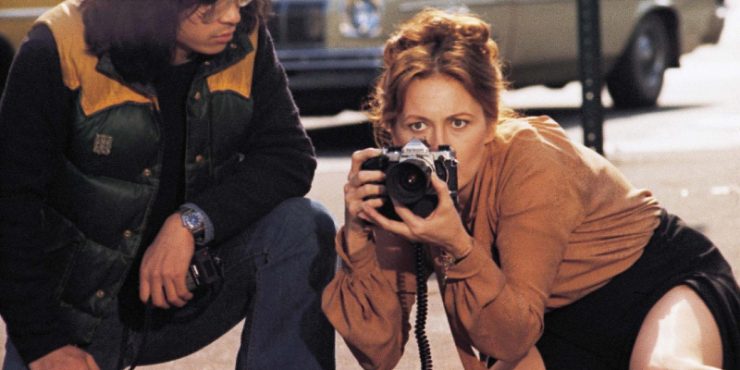 Camp has always been difficult to tie down. Even minds as renowned as Susan Sontag have had their studious definitions called into question by those who prefer to use the eye test – “You know it when you see it”. Eyes of Laura Mars exists in a fascinating in-between; released in 1978, Hollywood was actively transitioning from the more challenging style of New Hollywood films from earlier in the decade, and further embracing of commercial opportunities that blockbusters like Jaws and Star Wars embodied. Laura Mars is part gritty New Hollywood prestige, part Studio Era suspense, and a good amount of B-movie schlock. As movies were on the precipice of being a money-seeking venture first and an art form second, Laura Mars tries to stand in both camps. It is New Hollywood Reagan-ized.

Director Irvin Kershner is dialing into Roger Corman’s cult film playbook, filling his film with the prerequisite amount of violence and sex to thrill and titillate the audience as it wades through a preposterous story. The script is based on a story from John Carpenter (final writing credit goes to Carpenter and David Zelag Goodman), though this is before he would become a midnight movie icon in his own right. It involves a fashion photographer named Laura Mars, played by Faye Dunaway. Her photography is polarizing for its use of violence and nudity, and despite her great success, a lot of media attention revolves around people finding her work offensive and misogynist. On one end, her art is discounted as trash, and on the other, many resent the controversial images being used in advertisements.

Laura’s photos are inspired by troubling visions that she gets of grizzly murders. They flash in front of her eyes, and leave her ostensibly blind, helpless to watch the killer’s victims die excruciating deaths. The affliction, often considered the byproduct of an overworked creative mind, takes on new proportions when the victims she sees are people that she actually knows. Furthermore, when she comes out of her violent trance, she’s learning that these murders are actually happening. As friends and associates begin getting horrifically murdered – an icepick to the eye is the killer’s MO – Laura becomes overcome with tension, eased only by the presence of John Neville (Tommy Lee Jones), a police lieutenant in charge of the case who not only believes Laura’s outlandish story, but eventually becomes her lover.

Dunaway, an actress known more for her tempestuous on-set behavior than her brilliant talent, shows in Laura Mars her striking vulnerability. The film was her first after she won the Oscar for Network, which is in and of itself a perfect performance, and following that up with Mars proves not only her versatility but her tendency to lean toward more provocative material than her peers. Volumes have been written about her ferocious temper, and her behavior has certainly cost her work for the last few decades. Watching her in a film like Mars, it’s not crazy to ask if there was a better actor in the New Hollywood era. It’s also not crazy to ask that: if she were a man, would her behavior even be considered abnormal?

Laura Mars does not serve Dunaway as well as Network or Chinatown. Its script, which starts as a send up of Otto Preminger’s psychological thrillers, turns into a twisty neo-noir with red herrings and a surprise ending that isn’t simply disappointing, but a total collapse. Part of the problem is the story’s difficulty in deciding between moralizing over sexual violence in the media and embracing the pernicious nature of disco culture (the year before, Looking For Mr. Goodbar warned of disco leading to a decimated life of drugs and murder, and somehow that is the better film). The fact that the film itself lacks self-awareness about its place between high and low culture means that it gives itself no ammunition to take on the cheapening of Hollywood products in the late 70’s, instead becoming an industry standard: soft-glove commentary with no bite. The fact that Kershner would follow this with The Empire Strikes Back proves where his loyalties lie in the argument between art and commerce.

But despite itself, Eyes of Laura Mars still manages to be a captivating document of the Hollywood moment in 1978. Kershner proves here that he can make a true entertainment (he would ensure this with Empire), if not a totally logical one. The film was a hit upon its release, touching upon the coming influence of pop music upon all other mediums (Barbara Streisand sings the film’s theme “Prisoner” riotously over the closing credits), and predating the sex noirs that would permeate the following decade. It’s Dunaway that makes the film click in its best moments. She commits to the material in a way it probably doesn’t deserve, and it follows an unfortunate tradition in Hollywood where the male writers often hide the best characters for women in the worst material. Its fashion, its performances and its document of 1970’s New York is all worth the watch, but like the very artist it portrays, there isn’t very much here beyond the artifice.