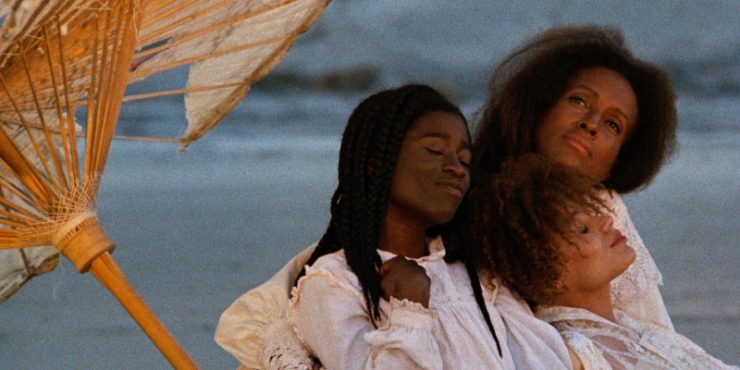 It may seem strange today – it certainly surprised me – to learn that Daughters of the Dust was, in 1991, the first feature film ever directed by a black woman to receive a theatrical release in the United States. That surprise may wain when you actually see the film, which – even in 2020 – is astonishing in its uninhibited portrayal of black femininity. It’s based on a little-known aspect of African American History: the Gullah people of the Southeastern United States. Isolated on islands off the coasts of Georgia, North Carolina and Florida, the Gullah people were distinct from their mainland brethren; they managed to maintain a good amount of their African history and tradition. The degree to which they were able to find hope within American slavery, the Gullahs saw the water between their islands and the mainland as symbolic of their spiritual purity, fighting against becoming fully consumed into American society.

Daughters of the Dust takes place at the start of the Twentieth Century, where there are whole generations of black people who have only known freedom, while many older generations still live with the scars of The Peculiar Institution. Writer-director Julie Dash is particularly interested in the tension between these generations, especially the generations of women. Dash  centers the film on the Peazant family, who live on Ibo Landing outside Georgia. The Peazants are a mostly matriarchal family, with the men involved in more practical matters. The head of the Peazants is Nana (Cora Lee Day), whose connection to the spiritual traditions of Africa are still strong and deep. Overlooking several generations below hers, Nana can see that the Peazants are steadily abandoning the “hoodoo” rituals that connected them back to their homeland, and beginning to embrace the more pragmatic monotheisms of the Global North.

The Peazant family is planning a group migration to the mainland, ready to free themselves of their provincial existence on Ibo Landing, but Nana is going to stay. For her, leaving the islands is much more of an existential departure than a physical one. Entering the more proper America, to her, means normalizing the very culture that sought to enslave her and all other Africans. They would not be the first of the family to leave. Before their departure, two cousins return from the mainland to help with their journey: Viola (Cheryl Lynn Bruce) returns from Philadelphia equipped with staunch Christian belief, while Yellow Mary (Barbara-O) is visiting from the city with a reputation as a “ruined woman” and a light-skinned lover named Trula (Trula Hoosier).  Viola and Yellow Mary, two incredibly distinct outcomes from life outside Ibo Landing, each bring with them perspective on life off the island, and while not all of it is pretty, there is plentiful opportunity.

Dash does not complicate Daughters with an abundance of plot, instead furthering her story through the strength of the imagery, which is awash in poeticism and sepia-tinted, golding hour photography along the shore lines of the islands. Its gorgeous, lush cinematography (by Arthur Jafa) illustrates the strength that the Peazants have found in their isolation, away from the titanic power that is growing quickly just across the water. The degree to which Dash weaves a plot into these visuals, it is usually in the form of argument: island vs. mainland, light-skinned vs. dark-skinned, modernism vs. traditionalism. There are those, like Haagar (Kaycee Moore) who will not shed a tear for Ibo Landing and cannot wait to embrace a less provincial lifestyle where they can participate in education and economy. Then there’s the younger Eula (Alva Rogers), impregnated after a rape, whose own status as “ruined” leads her to turn against the judgment that comes with Christian advancement.

There are no solutions presented in Dash’s story. The Peazants have reason to covet a more modern lifestyle, even as Nana’s warnings are very much with merit. As we become more and more familiar with these people, we learn that all of them have their own reasons to leave or stay. Some are more self-serving than others. To an extent, Daughters is about the inevitability of progress, an evolution that cares for little for consequences or casualties. Even without the gift of perspective, Nana instinctually values the Peazants and the Gullahs’ ability to keep themselves out of white society, not choosing to trust the “freedom” that has been given to them since the Civil War. Like Nana, Daughters understands what the order of events will be, and instead of focusing on the arc of passage, instead dwells on the beauties of a culture that will soon vanish. The women throughout Daughters, through differences and disagreements, find themselves with a well of love for each other that cannot be broken.

There are men on the periphery of Dash’s film. Eula’s husband, Eli (Adisa Anderson), exists within his own torment, unsure how to live with a woman about to give birth to another man’s child. Mr. Snead (Tommy Hicks) is a mainland photographer who escorts Viola to Ibo Landing, and is in many ways an audience surrogate in learning Gullah culture. Then there’s Bilal (Umar Abdurrahamn), a Muslim with his own mythological origin – his beliefs, even to the hoodoo of Nana, is seen as overly primitive. These men revolve around the film’s women, their anguish and fates tied to what the women decide to do. “Woman is the sweetness of life”, Bilal tells Mr. Snead as a fact of life. Moments in Daughters of the Dust may suggest a sort of utopian view of Ibo Landing, its simplicity a form or protection for the Gullahs against a force that has caused them incredible grief. More than anything, Daughters is a full-on appreciation of black independence, and passionate advocation for the strength of black women in times of great turmoil.