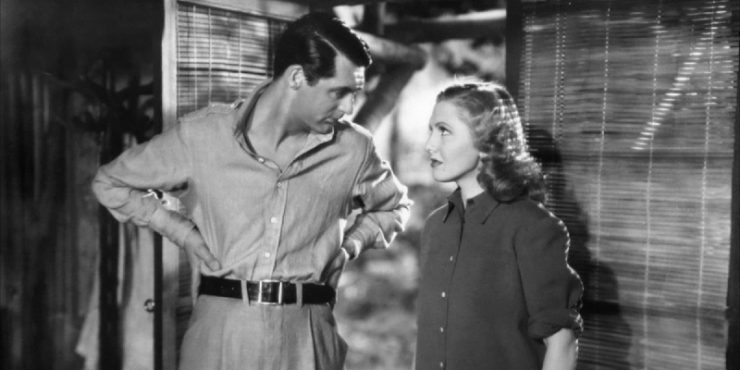 Masculinity and moral codes abound in the filmography of legendary director Howard Hawks, and Only Angels Have Wings has tied both tightly within the film’s plot, influencing and often encouraging the characters. The script, by veteran Jules Furthman, is a bit of a shell, a conscripted storyline meant to lend gravitas to the film’s main star: airplane stunts. Using special effects, like pyrotechnics and miniatures, as well as sharp aerial photography, Hawks’ obsession with the nerve-wracking intensity of these planes and their pilots is the energy that propels this film forward (no pun intended). But Furthman and Hawks are too good at what they do to make Only Angels Have Wings a shallow visual spectacle. It is instead a captivating story of what motivates impulsive people and the women who love them.

The film takes place in Barranca, a fictional South American port town where inclement weather and a pesky language barrier make things difficult for the Barranca Airways, a small airline that makes its bones by delivering airmail through rain or shine. The airline is managed by Geoff Carter (Cary Grant), a no-nonsense pilot who pushes his employees to make treacherous flights no matter the difficulty – though he always saves the most dangerous rides for himself. The men at Barranca understand that they put their lives on the line with each flight, whether it be because of thick rain and fog, or burdensome mountain tops that give impossibly small landing windows. Geoff’s men take their lead from him: suppress your fear and emotions, and make no attachments that can compromise your performance.

This lifestyle makes little sense to Bonnie Lee (Jean Arthur), a charming Brooklynite who makes a one-night stop in Barranca only to stay for longer once she’s acquainted with Geoff and his charming group of daredevils. This includes The Kid (Thomas Mitchell), Geoff’s closest friend and a pilot with over two decades’ experience. The Kid tries to warn Bonnie that pursuing Geoff is a guarantee of heartbreak, but Bonnie pushes ahead anyway. Geoff explains to her that he resists any and all romance after learning the hard way that women seldom accept the realities of his career. Bonnie is equal parts horrified and titillated by the danger these airmen endure for their work, and perhaps it’s that titillation that causes her to persist. She is unafraid to challenge the absurdity of Geoff’s principles, though he proves a difficult man to convince.

Geoff is an uncharacteristically humorless role for Cary Grant to take. It seems obvious now that a few years later and this would have been a perfect part for Humphrey Bogart. Grant’s patented charm is traded in for steeled machismo, playing a man who takes the responsibility of leading-by-example very seriously. Geoff’s willingness to die for airmail makes little sense to even his fellow pilots. He rationalizes by explaining that the airline is one week away from landing a robust contract, but even the airline’s owner – a scruffy, friendly man named Dutchy (Sig Ruman) – proclaims that the extra money is not worth the job’s stunning mortality rate. Like most of Hawks’ virulent men, Geoff is escaping his own past traumas, burying his feelings much in the same way he buries his fear of death. He’s a self-contained Catch-22.

Depending on who you ask, it might seem like Geoff’s romance with Bonnie intrudes on the film’s plot about the airline. I would say it’s actually the other way around. Jean Arthur’s Bonnie Lee is a much-needed dose of romance and physical comedy within a film that would likely choke on its testosterone otherwise. More closely associated with screwball comedy and the moral landscapes of Frank Capra, Arthur doesn’t always fit within the constraints of Hawks’ hostile world, but her presence does reinforce Hawks’ deft touch with adult relationships. As he would later perfect in his films with Bogart and Lauren Bacall, Arthur’s Bonnie melts the sharper edges of Geoff’s ego. Tinged with regrettable misogyny, Hawks’ films were nonetheless masterful documents of communion between genders and arguments for mature compromise over willful emotion and noxious expectations.

Only Angels Have Wings turns into a love triangle with the arrival of McPherson (Richard Barthelmess), a pilot marred by a past incident of cowardice that few have forgiven him for. Adding to it is McPherson’s wife, Judy (Rita Hayworth, in an early role), who happens to be the very woman who cemented Geoff’s feelings on love. That Only Angels Have Wings chooses to have this plotline and Bonnie’s is a credit to Furthman’s confidence as a writer, and Hawks’ dexterity as a director. Most would demure at so much melodrama, especially if their aim was to make a film about airplanes. The two men stack love stories on top of adventure tales because they have a fervent belief that you can’t have one without the other. The planes are less exciting if you don’t care about who is inside of them.

This is a preoccupation with Hawks. As his men, so resolute in their conviction, are so often disrupted by fierce, tough women; so are his films about male institutions often beleaguered by feminine interests like romance and seduction. The coexistence of the two represents the optimism Hawks has in the sustainability of human connection (though it should be said that in real life, Hawks was anything but a good husband). His shadowy photography – a noirish trait that predated the style – adds to the sensuality, softly lighting beauties like Arthur and Hayworth to further exploit their effect on Geoff. It also raises suspense, as the pilots go up in the air in further darkening skies. This level of mastery helps you understand why Hawks is so beloved amongst auteur theorists who appreciate, above all, creative and tonal control.

Only Angels Have Wings doesn’t have the comedic bite of His Girl Friday or Bringing Up Baby, which are two examples of Hawks using Cary Grant to his advantage. Its romance isn’t as captivating as To Have and Have Not, where the concept of the “Hawksian woman” was birthed. But what is most interesting about Only Angels Have Wings is how all of the parts succeed despite not being placed in perfect alignment. Grant’s dogged attempt at portraying a grizzled cynic, Arthur’s fitful energy in her shrunken screen time, and even Hawks’ unwillingness to sensationalize the plights of the adventurous airmen. Its peskiness makes it a more fascinating film than it would have been in perfection, and adds greatly to the film’s themes of living and working through discomfort. Like the airmen themselves, these are professionals truly earning their keep.