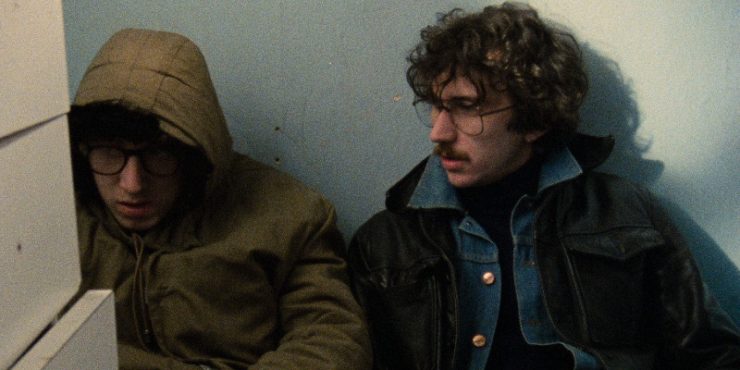 The human tensions in Mike Leighs films far outweigh the political ones, though that doesn’t mean that there is one without the other. His characters are so often wrecked by implacable restlessness, worn out by the insistent follies of everyday life. Leigh does not have the time or interest in explicit politics; he’s much too concerned with people, their plights and their condition. He worries about sinners and saints in equal measure, hardly seeing the value of one over the other, and it’s a common trait in his films that his camera is much more empathetic than any of his characters are. Meantime is among the best examples of this dichotomy: an affectionately told story about a not-very-affectionate group of individuals.

The Pollock family is on hard times. Meantime doesn’t specify how hard the times are or how long they’ve been, but their existence is stamped with permanent dissatisfaction. They’re crammed within a tiny flat cluttered with magazines, broken appliances and unimagined dreams. Mark (Phil Daniels), the oldest son is plagued with a perpetual foul mood matched by his mother, Mavis (Pam Ferris), and father, Frank (Jeffrey Robert). Colin (Tim Roth), the younger son, is the only one not marred by ill temper, but he is afflicted with extreme shyness and a possible undiagnosed learning disability. Mavis and Frank go through life unhappy but reserved to their fate, and this acceptance infuriates Mark who sees them as a curse to him and his helpless brother.

Mavis’s sister, Barbara (Marion Bailey), lives in a much more upscale part of London with her husband John (Alfred Molina). Their middle class existence belies a mediocre marriage that Barbara does everything to conceal. Barbara would love to help out her sister and her family, but her offers get met with ridicule. The Pollocks, especially Mark, have no interest in patronizing charity. Instead, the whole family lives off of unemployment, idling away their days on the couch or in bingo competitions. The sons venture out and have something of a social life. Their friend group includes Hayley (Tilly Vosburgh), a sweet-natured girl on whom Colin has a crush. There’s also Coxy (Gary Oldman), an out-of-control skinhead with major problems with impulse and boundaries.

Leigh’s stories are natural ensembles, but Meantime revolves around Colin, who is the center of every characters’ concern. Even those who show no respect for him end up proclaiming sympathy for him in some way. Barbara, Mavis and even Coxy claim to do things on his account or provide him with relief. Mark seldom speaks to him without mockery and insults, but he proves to be as protective as any other big brother. Despite their intentions, their actions fall short, leaving Colin in as bad or worse of a position than where he started. In this way, Meantime is as much of a critique of liberalism as it is of conservative Thatcherism. A common theme in his later films, Meantime deftly explores the tragedy of people failing to live up to their own ideals.

Meantime spends most of its time within the dilapidated buildings of London’s East End. Released in 1983, a lot of the film’s shabby locations are shorthand visuals for lower-class struggle during the Thatcher era, an era known for triumphant symbolism disguising conservative upheaval. It was not a particularly good time for the kind of people Leigh is generally interested in. His films highlight the ways in which weak people are preyed upon, taken for granted. They have great disdain for Darwinian logic. His scripts have little – if at all – exposition to explain why his characters behave in such irrational ways, and his worlds are so precisely built that the behavior seems perfectly calibrated to the situation. One often has to adjust how they’d watch a movie when seeing a Mike Leigh film, and afterward it becomes difficult to watch a movie in any other way.

Roger Ebert famously described movies as “machines for empathy”, a mantra that seems to explain Mike Leigh’s entire filmography. As he’s gotten older, his films have become less moody and his characters have become less hostile toward the world around them. After Naked, Leigh seems more interested in people who manage to avoid the angst of an uncaring society, persevering as a form of survival. Meantime is from a less forgiving time, no doubt because it was made in the midst of Thatcher’s premiership. Leigh will always have sentiment for the unglamorous; a proper appreciation for everyday life and everyday people. It feels like he is testing your limits for empathy, but it’s clear he’s motivated by great tenderness.

Written and Directed by Mike Leigh