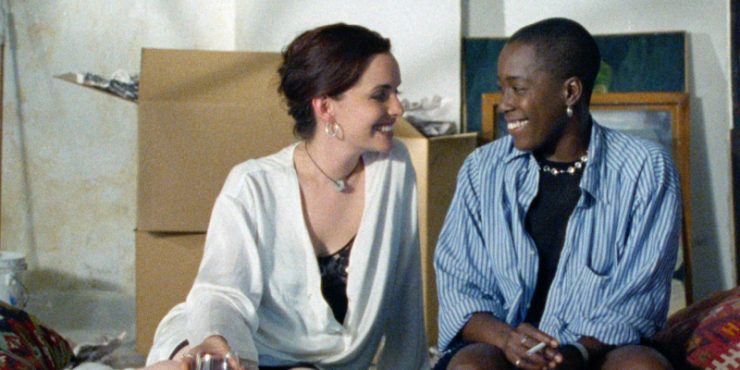 An experimental filmmaker by trade, Cheryl Dunye’s feature debut, The Watermelon Woman, has very little interest in perpetuating mainstream filmmaking sensibilities. Her fusion of documentary and narrative, as well as her inclusion of metafictional aspects should alienate a disoriented audience, but Dunye’s film does the exact opposite. Instead, Watermelon Woman‘s inclusive sincerity invites audiences unfamiliar with such radical creative approaches to join in on the fun. In only eighty-four minutes, Dunye layers themes of sexuality, gender and race into a quaint, charming story about a young woman trying to learn film history in 90’s Philadelphia. The DIY style is meant to suggest crude or even amateur filmmaking ability, until you accept Dunye’s generous invitation and find yourself in a beautifully told story of representational omission and sexual discovery.

Dunye plays a young filmmaker named Cheryl (off the bat, Dunye’s merging of fiction and nonfiction is obvious) who is researching the identity of a black actress from the 1930’s, notoriously credited as “The Watermelon Woman”. Cheryl discovered her playing a Mammie in a film called “Plantation Memories”, and was struck by her beauty and screen command. Intrigue grows as Cheryl learns that there is almost no information on the actress outside of her few screen credits in various Antebellum costume dramas, playing Mammies to hysterical white women. So Cheryl takes it upon herself to do the research and give the Watermelon Woman her proper due in documentary form. We watch Cheryl gather information through interviews and found documents, painting a rounder picture of the actress whose actual name is Fae Richards.

Intercut with Cheryl’s documentary footage is a romantic comedy between Cheryl and Diana (Guinevere Turner), an upper class white woman. They meet at the video store where Cheryl works, when Diana asks Cheryl for movie recommendations and leaves little imagination about her interest. Diana is sweet but flighty, a well-meaning woman with great privilege who is unable to truly understand the meaning behind Cheryl’s obsession with Fae Richards. Cheryl’s co-worker and closest friend, Tamara (Valerie Walker), does not approve of the relationship and sees Diana as a white opportunist, dipping her toes into the black queer lifestyle. While trying to learn all she can about Fae, Cheryl also learns about her own desires, as her personal project and her sex life collide in an unexpected way.

The stylistic and tonal divide between The Watermelon Woman‘s narrative and documentary portions are vast. To begin, the narrative scenes are shot on film while the documentary segments are shot on videotape. Where the scenes between Cheryl and Diana are crisp and lush, the interviews are washed out and harshly lit. Adding to the topsy-turvy back-and-forth between the two movies is how the documentary is more fictional than the narrative. Cheryl’s relationship Diana and her friendship with Tamara is pulled from details from her own life, while Fae Richards and her mysterious filmography is Dunye’s invention. Dunye stated that her research as a film professor revealed how little information there was about black actresses who played pivotal roles in the White, liberal Hollywood of the 30’s and 40’s. Fae Richards story is Dunye’s attempt to create a legitimate history that has been erased by decades of disregard.

Fae Richards ends up representing more to Cheryl than just an opportunity to pay proper credence to under-appreciated black actresses. Richards, Cheryl discovers, has her own fascinating history, including a sexual relationship with the female director Martha Page (another creation by Dunye), who cast Richards in all her roles. What was the basis of Fae’s queerness? Was it passion for Martha? Or a servitude practiced to sustain acting work? In her research, it becomes clear that there is a strain of black queer women interwoven into film history, which is hiding in plain sight. Cheryl bristles at the realization that almost all known information about Fae is linked to the white Martha, and she’s made uncomfortable by the way it mirrors her own link to the white Diana, who can’t possibly understand the depths of Cheryl’s predicament.

The film’s romantic comedy scenes are written in broad strokes with sitcom setups and easy-to-see punchlines. Dunye’s self-reflexiveness and use of intertextuality greatly strengthens her argument for film history as a legitimate form of American history. Through the particularly American mythology of cinema, Dunye explores our country’s troubled relationship with subservient imagery in black characters. Furthermore, Dunye is calling attention to a more latent repression of queer history in American society. Cheryl’s obsession with Fae Richards calls her attention to her own naiveté with regards to contemporary relationships. Images of actresses like Hattie McDaniel and Louise Beavers have built a strong foundation to the way White and Black women view each other, and Dunye is fascinated by how this manifests itself in the 1990’s.

The Watermelon Woman was released in 1996, a few years removed from the meat of the New Queer Cinema movement where directors like Todd Haynes and Gus Van Sant deconstructed genre as a way to protest oppression, particularly during the AIDS epidemic in the 80’s. Haynes and Van Sant are household names to most film-minded people, while Dunye is not. Her filmography is composed mostly of short films which infringe on the borders of narrative and documentary even more than The Watermelon Woman does. There’s an analytical quality to her work that perhaps makes her less prone to mainstream success like other New Queer Cinema directors. That said, everything suggests a monumental talent that has been left untapped (though Dunye has directed a number of episodes for popular TV series this past decade), for reasons that speak greatly toward the legitimacy of her arguments throughout The Watermelon Woman.

Written and Directed by Cheryl Dunye