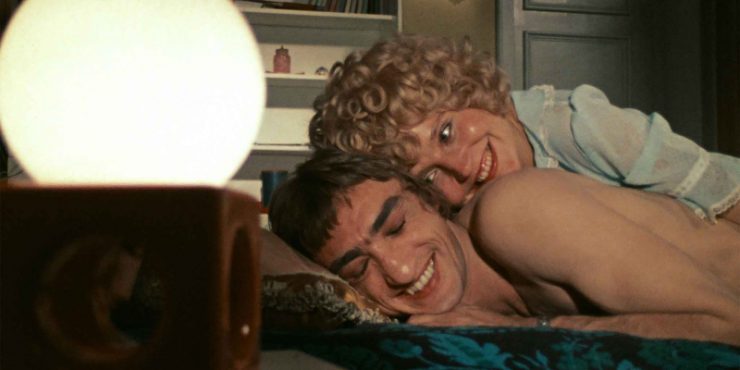 In about thirteen years, Rainer Werner Fassbinder directed over forty feature films before dying of a drug overdose at the age of thirty-seven. This doesn’t include his ambitious television projects which includes that gargantuan Berlin Alexanderplatz, a fourteen-part epic running over fifteen hours in length, adapted from Alfred Döblin’s massive modernist classic. Alexanderplatz was a truly landmark project, which predated like-minded television experiments like David Lynch’s Twin Peaks. Less known is his 1972 television project, Eight Hours Don’t Make a Day, which was only recently restored and made available in the US in 2018. Eight Hours is broken into five parts, each feature-length, and embodies the totality of Fassbinder’s brilliance.

Commissioned by the WDR, a West German Public Broadcasting system, Fassbinder was tasked with creating a series about a working class family. With little guidance or constraint, he produced a seven-and-a-half hour long meditation on humanity and love in the face of capitalistic enterprise. The series is casted with many of Fassbinder’s regular stable of actors including Gottfried John as Jochen, a young factory worker who falls in love with Marion (Hanna Schygulla), a blond beauty who works in the advertisements department of a local newspaper. Jochen’s family is led by Grandma (Luise Ulrich), a feisty matriarch who lives with Jochen and his parents, the ever-patient Käthe (Anita Bucher) and the temperamental Wolf (Wolfried Lier). When Grandma meets Gregor (Werner Finck), a romance blooms which leads to her leaving the family home.

Eight Hours has many parallel narratives, including labor disputes at the tools factory where Jochen works, Grandma and Gregor’s efforts to open a kindergarten for kids to play in, and the troubled marriage of Jochen’s sister, Monika (Renate Roland). Running latent underneath all of its many storylines is a deep affection for working class people, and a solidarity with their basic plight. Given nearly eight hours to tell his story, Fassbinder perfectly showcases how workplace aggressions and overwhelming bureaucracies can adversely effect life’s more precious elements, like love and family. Jochen and Marion’s passion is pure if impulsive, but it must still wade through Jochen’s workplace dramatics and Marion’s prejudiced mother (Brigitte Mira) and best friend, Irmgard (Irm Hermann).

The series was made in the midst of Fassbinder’s preoccupation for Sirk-level melodrama, which he most famously used in The Bitter Tears of Petra von Kant and Ali: Fear Eats the Soul. Like those films, Fassbinder personifies the spirit of melodrama into the filmmaking, with dramatic zooms in nearly every scene. The effect, so pronounced and over-the-top, turns casual. The persistence of the melodrama within these peoples lives is shown through the persistence of the camera’s calisthenics. Always one to embrace eccentricities, Fassbinder and Eight Hours puts high stress on the audience’s tolerance for visual and narrative non-sequiturs. The quirks and oddities of the characters create an absurd humor that balances nicely with the series’ more serious themes.

Toggling between superficial and and sincere treatment of dramatic content is perhaps what Fassbinder is best known for. It’s hard to think of a better, more thorough example than Eight Hours, which uses its length to establish a comfort within the discomfort he manipulates. This is also one of his most overtly political projects, directly addressing several social causes such as workers’ rights, affordable housing and public schooling. All the episodes are equipped with at least one, often more, monologues regarding society’s responsibility to empower the working class. The attention to working people is not only moving and noble, but also relatable in its presentation. The series’ arguments are well-formed, and the script is thorough in its examinations.

Eight Hours‘s several love stories add some levity to the story, but they are also a very important element. In a society equipped with proper social responsibility, humanity will only flourish. With Marion and Jochen, Grandma and Gregor, and eventually Monika and Jochen’s best friend, Manfred (Wolfgang Zerlett), love is another benefit to the properly rated value of humanity. While the socialist fight is ongoing, love is set as a human endpoint, a righteous goal and in some ways a prize for righteous living. The film’s most unlovable and unloved characters – Monika’s abusive husband Harald (Kurt Raab) and Rüdiger (Herb Andress), the factory’s loan dissenting voice – are also the most capitalist minded. Sexuality is trivialized as a simple function (as per usual, Fassbinder flippancy toward sex and nudity is disorienting in the best way) while affection is showcased as the truly admirable quality in relationships.

This series (subtitled as “A Family Series”) is profound in a way you don’t expect, mining heart and virtue out of oddities, and running political discourse alongside soap opera hysterics. Even the performances from the expansive ensemble, are purposefully affected, unfazed by the chaotic atmosphere, in fact an active part of it. It’s obvious that Fassbinder is using the commission as an excuse to experiment with all of his own cinematic obsessions. A fun game is to watch this series in total and find something that the camera doesn’t do. That he is also able to construct a beautiful and tight story through it all is an exceptional achievement. Eight Hours Don’t Make a Day is a little-seen triumph, a monumental achievement within a vast, prolific career. A perfect, five-episode distillation of a beloved filmmaker’s talents.