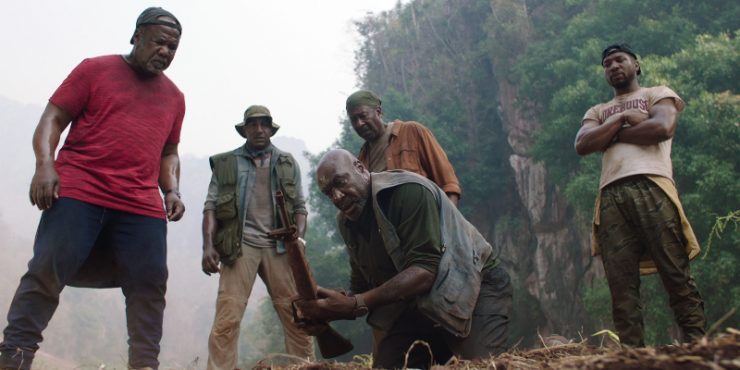 Watching Spike Lee’s movies, you can see that he views film history as a legitimate form of American history. Consider the way BlacKKKlansman opens with segments from Gone With The Wind, extolling the power of cinema while also decrying the ways that power has been weaponized on – and sometimes directly against – American audiences. There’s a certain lack of subtlety throughout his filmography that is brazen but also necessary. They all start with a latent understanding that historical education is not an American strong-suit, that reminders are properly needed for you to understand the context for what his characters are going through. Lee fears that many (white) American viewers are unaware of the great debt that the US owes to its black citizens, and the themes of all his films are invested in exposing that debt.

That debt still paralyzes Paul (a truly excellent Delroy Lindo), a Vietnam veteran whose post-war life was met with family trauma and societal cruelty. Riddled with PTSD and grief over the death of his squad leader, Stormin’ Norman (Chadwick Boseman), Paul has never made it back to normalcy since his three service tours. His lost spirituality morphs him into a hateful archconservative who wears a MAGA hat like a talisman and hardens his distrust of those who are different from him. Despite his condition, Paul decides to reunite with his the four remaining “Blood” members, Otis (Clarke Peters), Eddie (Norm Lewis) and Melvin (Isiah Whitlock Jr.). Together, the four men travel back to Vietnam to recover the remains of their leader, Norman, as well as retrieving $17 million in buried gold they’d left behind.

The Bloods’ journey into the Vietnamese jungle is equal parts Apocalypse Now and The Treasure of the Sierra Madre. These references are intentional as Lee once again reinforces his stories with archetypal plot points from classic films. War films as disparate as Bridge on the River Kwai and The Deer Hunter get their fair share of light, as well. It’s not lost on Lee that black soldiers are very much on the periphery of these classics (if they’re present at all), and in opening Da 5 Bloods with Muhammad Ali’s famous anti-Vietnam speech, he puts a fine point on this specific fact: the US was exploiting the bodies of black men in an overseas war while denying them their full humanity back at home. That cruel dichotomy is the heart of a betrayal that men like Paul never recovered from, marring them with a life filled with resentment and sorrow.

The Bloods are aided by Tiên (Lê Y Lan), Otis’s former lover, who helps arrange for them to work with a French money launderer named Desroche (Jean Reno), who will help them transport their gold out of Vietnam. They also have their guide, Vinh (Johnny Trí Nguyen), who agrees to escort them to and from the opening of the jungle. The unexpected arrival of Paul’s son, David (Jonathan Majors), complicates things as he forces his way onto the Bloods’ mission, claiming to look out for his father’s skittish temper but also seeking a cut of the gold. When David catches the eye of a French activist named Hedy (Mélanie Thierry), she and her partners (Paul Walter Hauser & Jasper Pääkkönen) become entangled in the gold-hunting scheme as plans go awry and blood starts to fly.

This is an incredibly violent film. Bodies are torn apart by automatic rifles, blown open by landmines. As a war film, it stands apart from most by having most of its action take place decades later. War scenes are shown in flashback, and in an interesting quirk, Lee decides not to provide his advanced-aged cast with any make-up or de-aging effects. It’s like an anti-Irishman in this way; we see Lindo, Lewis, Peters and Whitlock Jr. trudging through, their hair gray and faces wrinkled. You’d be surprised how little it distracts as you watch. It brings an intimacy to the violence and showcases the toll it has taken on these haggard characters. There’s a spiritual effect, the trauma is already written on their faces, even before they’ve experienced it. Like the great literature of Toni Morrison, Spike Lee mourns how black lives are unable to mourn their personal trauma, being consumed instead by their collective trauma.

Delroy Lindo, in particular, flourishes in his role of a righteous man turned Trump supporter. Paul has become undone by his self-hatred and guilt, which in turn, he aims at his friends and family. Lindo avoids the low hanging fruit that comes with playing a Trump voter, instead delving deep into the despair that has driven him to become one. A veteran of Hollywood and a common face in Spike Lee’s filmography, Lindo is a character actor by trade, but Da 5 Bloods gives him an opportunity for something bigger and richer. Paul is a man beyond recovery, his soul has been crushed by non-stop violence and a lack of love to counter-balance it. Paul’s seesawing affection for David, his estranged child, illustrates this. His undying love is obvious but the way it manifests itself is dangerous and unpredictable. Lindo captures that confusion and arbitrary rage perfectly, crafting a truly heartbreaking performance of a broken man.

Da 5 Bloods both exposes an American wrong but also attempts to undo a Hollywood sin. What aren’t black soldiers the face of more American war films? This isn’t Spike Lee’s first attempt to correct this. Miracle at St. Anna was about the Buffalo Soldiers in World War II, and was more directly about the divide between what was expected from black soldiers overseas and how they were treated on the homeland. Da 5 Bloods is a stronger film. Its themes are more complicated by the flaws of its characters. At a moment later in the film, Vinh explains to Otis that wars never really end, and that is what this film really harps on: racism in America – be it on a bus, in our schools or in our films – is a vicious cycle of incremental progress followed by vicious backlash. Until the US fully embraces its history, instead of burying it under nationalistic exceptionalism, men like The Bloods, supposed heroes, will never be made whole.

The film is still afflicted with some of Spike Lee’s worst habits. Specifically, for being the US’s most celebrated black filmmaker, he hardly ever seems to make a point of talking about black women, and Da 5 Bloods is no exception. But it’s also filled with the things that make Lee great: a relentless passion and an in-depth knowledge of his subject matter. The details that Lee fills his script with – the French exploitation of Vietnam that predated American occupation, the atrocities of My Lai, the unsteady relationship between Vietnam and its own people – would be too much for most directors. And perhaps it is here too. Like the best of his films, Lee is forcing you to come to grips with a lot that might make (white) audiences uncomfortable. In the aftermath of Breonna Taylor, George Floyd and the hundreds of others we mourn for in the streets these days, Lee is here to remind you: there is more, so much more you still don’t even know about.