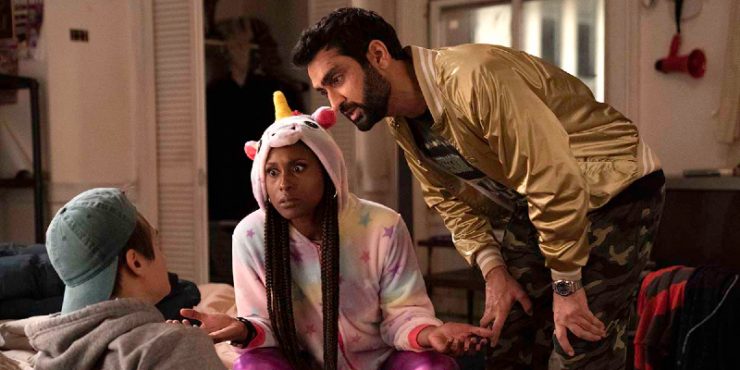 A common refrain you may find yourself saying while watching The Lovebirds is “Why isn’t this funnier?”. You won’t ask this maliciously, after all, you have a lot of goodwill towards its two stars, Issa Rae and Kumail Nanjiani, and you hope that they can cross over to the kind of mainstream success that they deserve. You’ve come to have great respect for the director, Michael Showalter, who’s gone from being a sketch comedy luminary in The State and Wet Hot American Summer to becoming a successful filmmaker who crafts sensitive indie comedies like Hello, My Name is Doris and The Big Sick. The collaboration appears to be a perfect storm of ascending success, a meeting of comedic minds meant to carry each other to commercial triumph.

The Lovebirds is a generally funny movie. That should be said off the bat. Its failures generally have little to do with the amount of laughs, but more to do with their quality. The film’s hackneyed plot – Rae and Nanjiani play a strained couple unwittingly thrown into a mystifying criminal operation – should lend itself to better comedic set-ups than it ultimately does. Instead, Showalter depends heavily on his stars’ uncanny talent for improvisation, which is charming in doses but does little to hide what is obviously a lack of well-written jokes. The script is patched together with cheap, easy plot points and pared down Hitchcockian twists. What we’re left with is two performers working desperately against the mediocrity of the material.

The script is by Aaron Abrams and Brendan Gall (there is a story credit for Martin Gero). It takes place in New Orleans and focuses on Leilani (Rae) and Jibran (Nanjiani). They’re a couple in their thirties who have lost the passion after being together for four years. He’s an uptight documentary filmmaker and she’s a headstrong ad exec. Before heading out to a dinner party, they have an explosive argument which leads to the realization that they should split up. This extremely basic set-up is not, in and itself, the problem with The Lovebirds, but the execution is shaky. I hardly understand why Leilani and Jibran got together before I’m being told that they’re going to break up. The director and writers don’t make it a priority to help us understand what these characters mean to each other, but in fact construct this contrived shell which – if nothing else – tells us exactly how the movie is going to end within the first ten minutes.

Before reaching the party, Jibran accidentally hits a cyclist (Nicholas X. Parsons) before his car is commandeered by a police officer (Paul Sparks) who immediately catches up to the cyclist and promptly murders him. Before Leilani and Jibran can even process events, the officer flees the scene and they are left as witnesses and possible suspects. They decide to flee the scene as well. Convincing themselves that the police would never believe their story, they choose instead to take a crack at solving the crime themselves and clearing their own names. In their journey, they encounter a feisty congressman’s wife (Anna Camp) who likes to torture people with horses and bacon grease (perhaps the film’s best bit), a blackmail operation inside of a frat boy apartment, and an underground, Eyes Wide Shut-style sex club with some sinister members.

You’d think these zany scenarios would open The Lovebirds up to various sight gag opportunities, but even in this regard, Showalter is surprisingly withholding. The frequency with which the film decides to pull back on comedic opportunities to simply allow its stars to riff is shocking. Why even make a sex club a vital plot point if you have no intention of exploiting that for comedy? It’s baffling how often the film short changes itself. By the time we get to the film’s third act, it’s obvious that Showalter is attempting to hide the script’s complete lack of plot (at 87 minutes, the story still feels stretched thin), which gives the whole project a rushed, tossed-off quality that makes it forgettable before you even finish it.

It’s frustrating to see a film directed by and starring talented people fall so flat. The Lovebirds commits the cardinal sin of lacking legitimate character development and the director does very little to make up for it. Consider the success of Rae’s television series Insecure and Nanjiani’s performance in The Big Sick, and how both excelled by truly comprehending their characters (no doubt helped by the fact that Rae and Nanjiani were writers on their respective projects). The Lovebirds is a film that appears to have no knowledge whatsoever about why its characters do what they do (or for that matter, what makes its actors so popular), which is ironic considering how different that is from Showalter’s previous films. It’s forgivable that the film wants to be frivolous, but it’s not forgivable that the film seems to sacrifice laughs in order to do so.