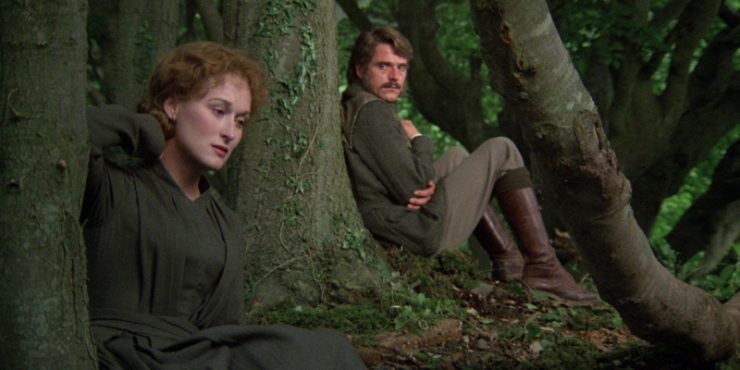 The legend of Streep having grown to such gargantuan proportions, she’s come to represent a very mainstream version of excellence. People think of her as an actress the way people think of Steven Spielberg as a director, unmistakable skill is enlarged by a fortunate feat of timing. People think that Streep is great because that is what everyone thinks. Critics will say there is an absence of danger and vulnerability in her performances, or that her best performances are often in mediocre films. Neither is true, at least not in any absolute way. Streep’s precision and preparation give her a sort of uber competence, which means her performances seldom have a loose, natural quality. The work is on the screen for those to see, and the subtext is only as good as what can be brought to the forefront.

That is certainly the case in The French Lieutenant’s Woman where she gets to play two characters. In one story, she plays Anna, the heroine from the John Fowles novel that the film is based on. Anna lives in Victorian England, in a small town called Lyme. She works as a companion for a wealthy woman (Patience Collier), but is burdened with a reputation. The whole town speaks of her affair with a French military man, and they also speak of her persistent melancholy now that he has abandoned her. Anna catches the eye of Charles (Jeremy Irons), a gentleman paleontologist who has recently become engaged to Ernestina (Lynsey Baxter), the daughter of a very wealthy industry man. Charles is captivated by the mysterious Anna, but fears his own desires when he considers his upcoming wedding.

Streep also plays Sarah, an actress in the 1980s, who is playing Anna in the film production. Irons is also playing Sarah’s co-star, Mike. Mike and Sarah are in the midst of an on-set romance which they try to hide from their respective spouses. The script, by famed playwright Howard Pinter, is an ambitious take on Fowles’ infamously meta novel. Pinter creates his own meta-fictional universe, where the characters lead double lives and their actions are mirrored by the act of performance. This disruption to the balance of the story is felt immediately. It’s difficult to discern when we are watching acting and when we are watching some acting like they’re acting, which is intentional on the part of Pinter and director Karel Reisz, but it makes it no less maddening. Themes of hypocrisy and intolerance are shelved for self-aware posturing, muddling the whole film.

What the parallel narratives add to the story is hard to parse. The similarities of the two stories never coalesce into anything bigger, nor does the film wish to impart contemporary wisdom on the period drama. The power dynamics between Charles and Anna bear little on those between Mike and Sarah. Given the benefit of a more progressive time, Sarah has more freedom to pursue the married Mike, and does not risk the societal scorn and scorched reputation that Anna faces. And yet, Pinter and Reisz don’t pierce the gender dynamics at play, nor do they wish truly discuss how that sexism still persists. While Anna and Charles’s affair becomes undone by a fierce act of cunning, Sarah and Mike’s simply flitters away. If one is looking for a thematic connection point between the two, it is hard to find it outside of the actors playing the parts.

In trying to honor the post-modern Fowles, Pinter instead sinks both versions of his story into the murk. It is a work of too much cleverness. Irons and Streep both do their best but have trouble truly linking the fabric of the two narratives – Streep is much better as Sarah in the 1980s, where Irons is superior as the Victorian-era Charles. Outside of a handful of inspired moments (Lynsey Baxter’s performance is a delight), The French Lieutenant’s Woman more often feels like a collection of attractively-shot sequences empty of meaning. The films comes a few years before Merchant-Ivory would  perfect this sort of period drama, often finding ways to reorient “difficult” fiction into costumed austerity in films like Howards End and The Remains of the Day. The French Lieutenant’s Woman falls short of that benchmark, even if it does include good work from its two stars.