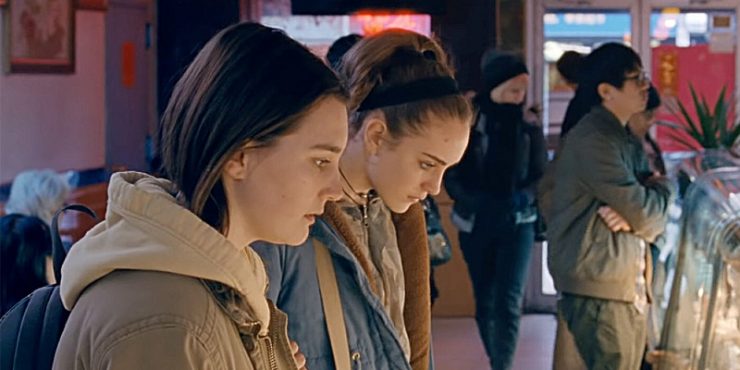 “Are you abortion minded?” This question is asked early in the film Never Rarely Sometimes Always by a middle-aged woman at a women’s clinic in Northumberland County, Pennsylvania. The question is being posed to a seventeen year-old named Autumn (Sidney Flanagan). Autumn knows her answer immediately even if she is struck by the phrasing of the question, so peculiar and leading. Autumn has lived enough in her seventeen years to know not to answer this woman affirmatively, so she says she’s undecided. She isn’t undecided but where she lives, even this noncommittal answer ends with her sitting in this woman’s office, watching a video about the horrors of abortion. Autumn knows immediately that this place will not provide her with the help she needs.

The details of Autumn’s pregnancy are vague. We see from brief sketches of her school and home life that there is very little in the way of positive male reinforcement in her life. Her mother (Sharon Van Etten) is affectionate but tied to a man named Ted (Ryan Eggold) who is aloof and a possible addict. Her schoolmates feel comfortable enough to scream “Slut!” at her while she performs in a school assembly. Her boss (Drew Seltzer) offers no relief from her grocery store job when she becomes ill in her pregnancy. The only truly sympathetic figure Autumn has is her cousin, Skylar (Talia Ryder). Skylar recognizes Autumn’s strange behavior and what it means. When they learn that, as a minor, Autumn is unable to get an abortion without a parent present, they steal money from their job in order to get a bus ticket to New York City.

Writer-director Eliza Hittman keeps the father’s identity hidden, a decision that adds increased tension and casts all of the film’s numerous men in a predatory light. Their behavior toward Autumn is usually hostile, mistaking her disassociation for obtuseness. Autumn does little in the way of rebelling and the expression in her face tells us that she sees the futility in angry gestures. Her lack of action is a form of self-care. Mostly, she is interested in aborting her pregnancy without Ted and her mother knowing a thing. This seems to be a bigger priority than even ending the pregnancy safely, evidenced by the fact that she attempts to self-induce a miscarriage before finally deciding to make her trip.

Autumn and Skylar hardly talk to each other at all, instead relying on various forms of nonverbal communication that illustrate their understanding of one another. Skylar’s history with men is even less detailed, but it’s obvious that she’s aware of the realities of their situation. On their bus into the city, a young man named Jasper (Théodore Pellerin), eagerly introduces himself and invites them to a show in New York. Skylar politely declines, though he does end up with her number. Jasper’s pursuits are superficial and obvious, though Skylar placates his ego. Throughout Never Rarely, Hittman makes clear that not all threats come in the same way, but each unique situation presents its own opportunity for abuse. When the girls are kept in New York City for longer than expected, they eventually have to rely on Jasper for a favor, a favor he has no plan on performing for free.

Never Rarely Sometimes Always is a spiritual sibling of Cristian Mungiu’s harrowing Palme d’Or winner 4 Months, 3 Weeks and 2 Days. Mungiu’s film was political in nature, a bleak portrayal of the oppressive lifestyle in Romania under the Communist Nicolae Ceausescu. Hittman is less interested in governmental systems, or at least they aren’t as interesting to her than the girls themselves. Even when acquiring an abortion in a country that allows her to do so, Autumn is put through emotional and logistical turmoil. In Never Rarely, it is less about the cruelty of political systems than the world itself, which still leans on patriarchal logic to shape many of its policies. In the face of this, both films excel at showcasing the second-hand nature of risks women are willing to take to enforce their own reproductive rights.

As Autumn, Sidney Flanigan makes her acting debut. Saying her performance is understated is itself an understatement. It is mostly through Hittman’s intimate, detail-oriented camera that we have a context for what is going on beneath Autumn’s hardened expression. There is a numbness to her that suggests anguish, an anguish that could come from anywhere, from adolescent angst to genuine post-traumatic stress. In a scene in the film’s second half, Autumn is finally asked to come to grips with her own sexual history and what has led to her pregnancy. It’s apparent that she isn’t used to direct questions about her well-being. Stating the complex details of her past, mixed with a professional showing sympathy for her plight, brings upon unexpected emotions, and Flanigan’s portrayal is among the more heartbreaking performances I’ve seen this year.

I have yet to see Hittman’s previous two features – It Felt Like Love and Beach Rats – but Never Rarely is a brilliant example of verité filmmaking, utilizing handheld photography (cinematography by Hélène Louvart) and a documentary style without sacrificing cinematic scope. Without depending on too much on dialogue – the crutch of every mediocre independent feature – Hittman instead tells her story through expressions suggested by her precise framing and editing (Editor, Scott Cummings). Never Rarely Sometimes Always was robbed of its theatrical run a week after its premiere when coronavirus swept the nation and forced a shutdown. It’s now finally available to rent on-demand, and earns the audience and word-of-mouth that it would’ve gotten had it been given the chance.

Written and Directed by Eliza Hittman