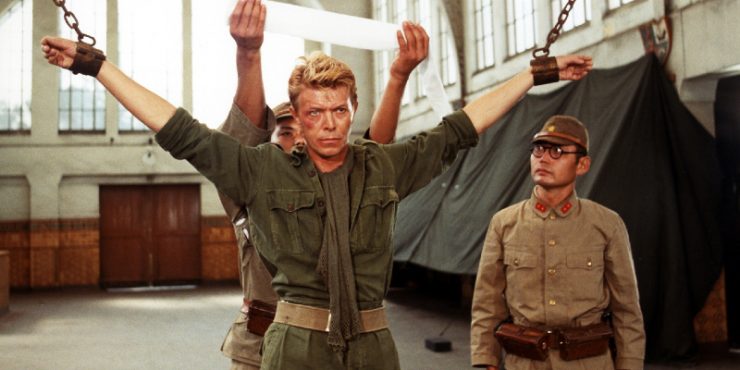 Aside from being one of the preeminent rock stars of the Twentieth Century, David Bowie proved to be a rather talented actor. His roles are few – on several occasions, he was simply asked to play a comedic version of himself which he was quite adept at – and mostly forgotten. The exceptions, of course, being The Man Who Fell to Earth, Nicolas Roeg’s psycho-sexual sci-fi classic, and Nagisa Oshima’s Merry Christmas, Mr. Lawrence. In both instances, a majority of Bowie’s work as an actor is accomplished by simply being David Bowie. His imposing, seductive figure is showcased and desired. People cannot help but be captivated by his presence. Who can do that better than the Starman himself?

Bowie is doing a completely different kind of acting in Mr. Lawrence than he was asked to do in The Man Who Fell to Earth. Roeg used the rock legend as a prism for the surrounding characters to project upon. Oshima is pushing Bowie toward legitimate characterization. He plays Jack Celliers, a British officer kept captive in a Japanese POW camp during World War II. Like most British officers, Celliers faces his imprisonment head-on without protest, though he is quick to point out hypocrisies and objects to how he and his fellow British soldiers are being treated. Led by the young, but ruthless Captain Yonoi (Ryuichi Sakamoto), the camp is run brutally with discipline doled out mercilessly and usually in the form of blunt violence.

Yonoi’s main officer and head executioner of violence is Sergeant Hara (Takeshi Kitano). Hara is reactionary and temperamental. He hardly has interactions with prisoners that don’t end in blood. For the prisoners, their main liaison is Lieutenant Colonel John Lawrence (Tom Conti), who speaks Japanese and does his best to quell the frequent tensions. Despite getting his own fair share of beatings, Lawrence tries to help Celliers and other British prisoners understand the nature of their captors. Outside of a global war, their tensions are mostly a failure of communication, a clash of values and cultures that stress the same principles in opposing ways. Lawrence hopes that Celliers’ arrival will produce the kind of ceasefire that he’s been hoping for, but reality turns out quite different.

This is may remind many of David Lean’s classic film The Bridge on the River Kwai, which also opens with the cruelty of a Japanese POW camp and ends in a somber meditation on the arbitrary nature of either side accusing the other of evil. Mr. Laurence differs mostly with its focus on shame. Shame is a driving force for many of the characters, including both Celliers and Yonoi. Celliers can’t forgive himself for his betrayal of a younger brother, while Yonoi can’t reconcile being overseas when his army comrades were killed during the February 26 Incident in 1936. Oshima and co-writer Paul Mayersberg add an element of homoeroticism to the story as well, displaying Yonoi’s latent but obvious infatuation with Celliers. This suppressed emotion brings about its own shame, one that manifests itself in destructive behavior.

Oshima is probably best known for his 1976 film In The Realm of the Senses which included graphic, un-simulated sex scenes. The eroticism is certainly less pronounced here, where instead desire is repressed by men who must live by a war code. Early in the film, a Korean and Dutch soldier are beaten after being caught having sex. The Korean soldier is forced to execute himself via seppuku, while the Dutch soldier inadvertently kills himself while watching, biting off his own tongue. The scene’s brutal violence is so intimate and visceral, and brings to the surface the tempestuous emotions roiling within these Men of War. It is Japanese Honor versus the European Will. Individualism versus collectivism, which leaves neither side with much to be proud about. There is no room for empathy in their world, and so, there is no room for the unexplainable attraction that Yonoi is plagued with. This emotional incompatibility stems the violence.

Sakamoto’s performance, filled with internal conflict and strife, contrasts with Bowie’s strident rebellion. The two men find great pleasure in squaring off with one another. In River Kwai, Alec Guinness and Sessue Hayakawa competed in a perpetual idealogical chess match. In Mr. Lawrence, the two sides are more graphic in their opposition. Yonoi is not above striking down the man whose Stiff Upper Lip impresses him so. Celliers is given the benefit of a more hearty backstory, including flashbacks to his childhood in South Africa, where Yonoi’s history is limited to exposition that he himself provides. It’s the handful of scenes between Celliers and Yonoi that give us the most emotion and provide us with the evidence of their mutual animosity and attraction burning on screen.

Sakamoto – an influential musician in his own right – also composed the film’s caustic, synth-heavy score. It was his first film score and the beginning of a successful second career, which includes an Oscar win for his work in The Last Emperor. The music shifts wildly between scorching intrusion and swelling triumph. Its guidance of the story is crucial and it’s perhaps the film’s strongest element. Mr. Lawrence doesn’t have the scope and majesty of River Kwai (few films do), but it’s provocative nature and creative casting adds a complexity that you wouldn’t expect. Late in the film, Conti’s Lawrence explains to a repentant Hara that they are victims of “men who think they’re right”, which encompasses the film’s themes of empathy’s losing battle with wartime principles. But Oshima’s film does have hope for communion, where hidden love languages threaten to topple this world of incessant violence. It’s a seed sprouting against an established infrastructure, but Merry Christmas, Mr. Lawrence has belief in its growth.