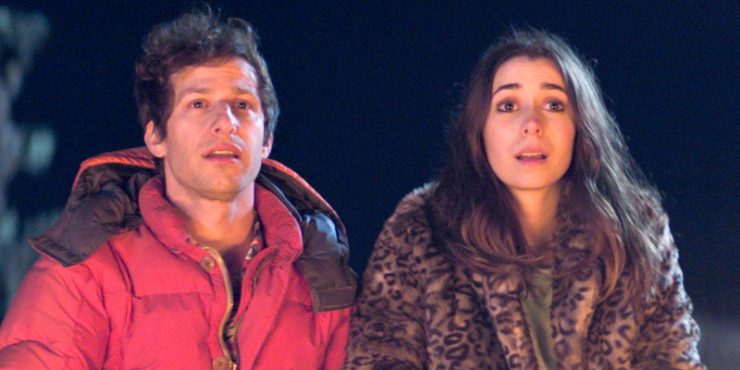 Palm Springs has an exquisite first act. If you’ve happened to watch the trailer for this film then you already know the movie’s big reveal, but caught unawares, the first ten minutes is especially effective. A lethargic wedding guest named Nyles (Andy Samberg) can hardly manage to get out of bed in the morning. His girlfriend, Misty (Meredith Hagner), tries to have sex with him but it goes kaput. She is more consumed with the upcoming wedding of her closest friend, Tala (Camila Mendes). Misty is the Maid of Honor in spirit, though the actual title goes to Tala’s sister, Sarah (a remarkable Cristin Milioti), who rivals Nyles for emotional malaise. Neither want to be a part of this wedding, so it makes sense that they find each other before the end of the night, finding common ground in their distaste for the whole affair.

This is where I will write a massive **SPOILER ALERT** and say that if you’ve yet to see Palm Springs, I’d recommend taking a seat and giving it a watch before continuing here. The film was released on Hulu this weekend, after a successful premiere in Sundance earlier this year. Under normal circumstances, Palm Springs would get a substantial theater run. After all, it does star Samberg who is perhaps our only young comedic movie star (well, youngish; he turns forty-two in a month), and it’s produced by The Lonely Island, his immensely popular sketch comedy group. It also has the benefit of giving Cristin Milioti a lead role. Milioti has been out-kicking her coverage in small roles in The Wolf of Wall Street and the second season of Fargo. Palm Springs gives her a legitimate leading role and she totally delivers.

So, I think I’ve put enough space after the spoiler alert to say this: at the end of their night together, Sarah mistakenly follows Nyles into a glowing cave and finds herself trapped inside of an endless time loop. Every morning she wakes up and it is once again the morning of Tala’s wedding and everything has reset. Nyles has been stuck in this loop already for a significant amount of time. His complete familiarity with the situation does little to quell her hysteria. Having someone who understands his predicament gives Nyles a small spike of energy, even if Sarah is even more pessimistic about human relationships than he is. Their eventual bond gives way to a reveal of buried secrets leading to a reckoning that could hopefully help them escape.

So it’s like Groundhog Day but with a friend. The film’s script, by Andy Siara, is brilliant in its construction (if a bit hackneyed in its character motivations), understanding the rules of his world so thoroughly that even the plot holes feel precise and faithful to the spirit of the story. The instant that the nature of the time loop is revealed, the film ascends to a necessary level of absurdity, which is contrasted wonderfully against the sincerity of its characters. Suicides and murders do nothing to break them from their sentence, nor do acts of selflessness. Eventually, Nyles and Sarah begin embracing “the fact that nothing matters”, and suffer through their current existence because they have no choice but to keep living. It’s a dreary realization, but one that helps bring them closer and helps them realize their own feelings for one another.

It’s at this moment when Palm Springs inadvertently becomes the perfect film to watch during the fourth month of coronavirus quarantine. It is both the low-stakes romantic comedy that we need in this high-anxiety moment, as well as a prescient metaphor for that moment itself. Directed by Max Barbakow, in what appears to be his narrative feature debut, Palm Springs finds that delightful middle ground between Lonely Island’s standard velvet glove anarchy and genuine insight into the stark reality of human relationships. As you might expect, the film does turn toward optimism in its final act, giving its characters and its audience a chance to have some hope within the darkness. The optimism is earned, and aided by the terrific performances from Milioti and Samberg who stress the persistence of Nyles and Sarah’s sorrow before giving them much needed release.

A subplot featuring a man named Roy (a dutiful J.K. Simmons) is a solid encapsulation of the film. Roy was also brought into the time loop by Nyles and has turned into a vengeful, bloodthirsty maniac. Waking up every day in Irvine, Nyles is always unsure when Roy will take the trip to Palm Springs to murder him in some new, torturous way. Simmons is hilarious, forever proving the ways in which his Oscar-winning turn in Whiplash was only a sliver of his range. It also allows Samberg and the Lonely Island guys to indulge in the kind of madcap violence they specialize in. Before the film’s end, Roy reveals the source of his anger, and yet again, Palm Springs finds a way to give us a wonderfully full and realized character. It’s a simple treat that too many mainstream comedies neglect to include.