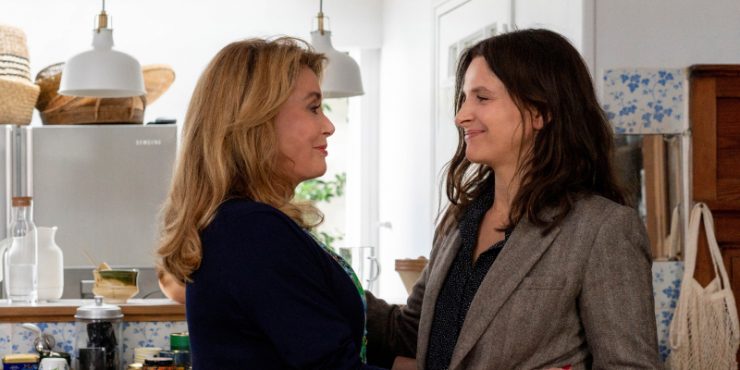 Familial tensions abound throughout the films of Hirokazu Kore-eda. Children are often suffering the burdens of disgruntled parents, as the pride of adulthood grinds uncomfortably against the pure innocence of youth. The Truth is his first non-Japanese film, with an all-star cast of Catherine Deneuve, Juliette Binoche and Ethan Hawke. Deneuve plays Fabienne Dangeville, a legendary French actress with a reputation for excellence and vanity. Not a great stretch for the legend of French cinema. Fabienne’s status as a luminary does little to brighten her notoriously sour mood, and it certainly pushes against an already tenuous relationship with her daughter Lumir (Binoche). Their relationship is the center of the film, but Kore-eda is also exploring Fabienne’s fear of death, aging and vulnerability. The Truth is about the emotional limits of creation, and the sacrifices people make for pursuing great art.

Fabienne has just published a memoir, a book that she fully admits contains little truth and is another piece in the structure of her self-created mythology. Lumir travels from New York to toast Fabienne’s publication, bringing along her husband, Hank (Hawke), and their daughter, Charlotte (Clémentine Grenier). Lumir can hardly read a page before pointing out her mother’s inaccuracies, taking a pen and post-it pad to the book to mark all of the lies. Still bearing the scars of Fabienne’s absentee motherhood, Lumir cannot handle her mother’s refusal to acknowledge her shortcomings. To Fabienne, reality is a poor substitute for fabrication, and even a scolding from her daughter isn’t enough for her to undo her commitment to the illusion. To Lumir, the truth has been too painful to ignore.

When Fabienne’s diva antics finally drives away her longtime manager, Luc (Alain Libolt), it’s Lumir who must take up the responsibilities as Fabienne prepares to shoot a new movie. It’s a supporting part, playing against France’s latest star actress, Manon Lenoir (Manon Clavel). On set, Fabienne is petty and resentful of the young actress. Many note Manon’s resemblance to Sarah Mandovan, a beloved actress and former friend to Fabienne, though Fabienne refuses to acknowledge it. Sarah’s death, mysterious and tragic, hangs over both Fabienne and Lumir in various ways that get revealed throughout the film. The ghostly figure of Sarah wedges itself between mother and daughter, and Manon’s presence brings up long-buried bitterness that effects both their relationship and Fabienne’s performance in the film.

Like many of Kore-eda’s films, the script’s tentacles reach far beyond the central conflict, and characters like Hank and Luc are given their fair due. The Palme D’Or-winner is truly adept at finding the depth in even his supposed supporting characters, allowing their individualism to breath life into the main story. Hank, an actor with a drinking problem and a moderately successful career in television, tries his best to hide his problems from his family, taking refuge in parenting Charlotte. Like Fabienne, his outward life is a performance that many can see through, his shaky sobriety openly joked about to his face. Luc, a dutiful servant, has perhaps had enough of the tyrannical Fabienne or he may be taking advantage of a long-sought opportunity with Lumir in France and able to take up the job.

These undefined details are usually the most fascinating parts of Kore-eda’s characters. People getting worked up over hypocrisies that they don’t see in themselves or the horrors of realizing you’ve become the thing you’ve most wanted to avoid. The Truth is a film about people too afraid of reality, imprisoned by the lies they’ve constructed. This works well with Kore-eda’s shift to Western culture, as flaws of pride become flaws of vanity and ego. His script, perhaps containing more metaphors than any one film should have, still has the benefit of simplicity. We simply choose when we want to accept those around us for who they are, and The Truth is fascinated by that choice. What influences it? What denies it? Easy solutions are not to be found, but the greatest moments of peace throughout the film are the ones in which mother and daughter accept one another’s reality.

Deneuve, with decades of brilliance on her resume, takes to Fabienne perfectly, orchestrating the second-hand nature of her cruelty. Her success and her reputation hardly dilute her vocal dissatisfaction or the psychological warfare she wages on those around her. Her obsession with age only gets stronger as she gets older, her memories flooded with women who died at a much younger age – she gets older as they all stay the same. Deneuve is given only a handful of details in which to express this vast expanse of emotions. This is a woman whose only vulnerabilities are saved for her performances, while her family is left with the husk of a human being. It’s her career that has protected her from the fate of those women around her, and it’s the career that she has committed her life to.

The Truth‘s ending is a bit too tidy, a slight detour from the film’s complicated emotional landscape. I can understand it. The fierce stand offs between Fabienne and Lumir would leave any person begging for a release. Binoche, playing the put-upon daughter, doesn’t rely on easy grasps of sympathy nor does she lean on Lumir’s similarities to the mother she resents. Instead, as she always does, she creates a wholly unique but familiar woman: a successful writer who must reserve energy to battle an egotistical mother and support a drunk, needy husband. Her nerves are shaky but solid considering. Lumir and Fabienne spend the entirety of the film grabbling for power, trying to win battles of integrity and righteousness. This war will be ongoing which, in its way, is the most basic truth in the film.

Written and Directed by Hirokazu Kore-eda