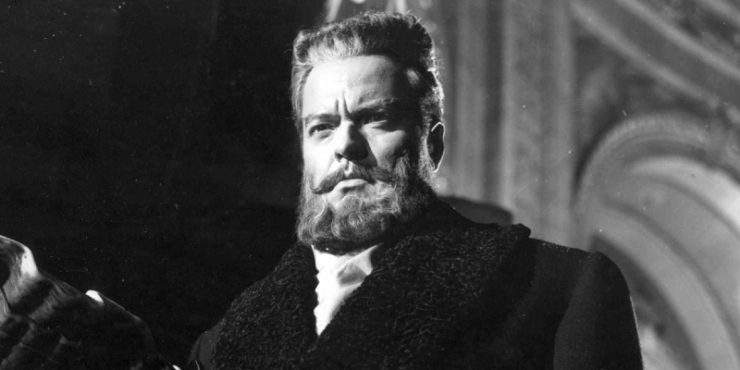 Stories that circle behind the production of Mr. Arkadin are deliciously Welles-ian. An unfinished film, pieced together by the cineastes who adored him, with a convoluted plot that is rescued by inventive filmmaking. What more can be said? I’ll see what I can come up with. There are various versions of Arkadin floating around, including one titled Confidential Report, which was the version released in England. No one knows which version is definitive, because Welles never put the finishing touches on any of them – and unlike The Other Side of the Wind which was resurrected decades after his death, all “versions” of Arkadin were released while the legendary filmmaker was still alive. So, why not finish it?

To hear Welles tell it, the film was taken from him when he failed to meet editing deadlines. These kinds of disasters of creative control plagued most of his career, most famously with Touch of Evil which is another of his films that is viewed as a hopeful facsimile of what he would have wanted. Arkadin is not nearly as famous as Touch of Evil. Perhaps because the budget is obviously much smaller, and it’s completely barren of movie stars save his own star turn as the eponymous Arkadin. Draped in a wig and beard that make him look like a satanic Santa Claus, Welles’s Arkadin is an enigmatic man with extreme wealth and lots of secrets. His sole concern is for his daughter, Raina (Paola Mori, who interestingly enough would become Welles’s third and final wife), whom he cherishes.

How Mr. Arkadin accumulated his wealth is a complete mystery known by only a handful of people. These people are beginning to come up dead. When one of these murders is witnessed by Guy Van Stratten (Robert Arden) and his girl, Mily (Patricia Medina), the two Americans become ensnared in Arkaden’s dark web of murder. Guy and Mily feel like their information could help them extort money from the rich Arkaden, but Guy becomes more interested in escorting Raina when he meets her in Spain. Pathologically protective of his daughter – and desperately afraid that she could learn of his criminal beginnings – Arkadin pays Guy to stay away from her and do a job for him instead. Arkadin asks Guy to find any and all information about how his empire was built. Arkadin claims amnesia, not remembering how he built his wealth. He wants Guy to help him learn the information that could later be used to incriminate him.

Guy finds himself traversing several locales throughout Europe, interviewing many and finding little, occasionally getting crumbs leading to the reveal of Arkadin’s truly nefarious transgressions. The plot is complicated, and not helped by the film’s shoddy dialogue dubbing which is a common theme throughout many of Welles’s films from this era (even the masterful Chimes at Midnight suffers form this). The story is patched together from various parts of the radio series The Lives of Harry Lime. Not owning the rights to the Lime character, Welles changed the names and obfuscated some of the details to morph it into an “original” story. In this adaptation, Welles manages to create Guy Van Stratten, a character who manages to be even less sympathetic than Lime himself, one of the most devilish villains in the history of film.

This is what happens when you swap out an actor like Welles for Robert Arden who is doing a bad impression of a film noir hero. Welles himself falls back into his more comfortable place, behind depths of make-up and costuming. One gets the impression that he thinks the make-up is doing a lot of the performance for him, when in fact the character comes off as ridiculous, molded by grotesque prosthetics. There is little attempt to show Arkadin as captivating in any way, outside of the outrageous way he looks, and an actor as talented as Welles should really deliver something better than this. He isn’t helped by his script which feels like two different stories: a thriller with international intrigue and a love triangle between a man, a father and his daughter. Neither plot line leads to anything satisfactory.

If nothing else, the script seems to be a vessel for Welles to venture further into his more experimental filmmaking techniques. Mr. Arkadin is perhaps the greatest example of how his vast ambition as a director was always doomed to mesh with the mainstream storytelling he preferred. Arkadin is boiler plate noir but the weakness in the story falls way behind the exciting movement of his camera. His trademark low angle shots are numerous, but there is also a drunken sequence on a bobbing cruise ship, a dizzying array of close-ups spinning the audience into oblivion. This brief moment reminds you as to why Orson Welles is probably the greatest American filmmaker there ever was. Unfortunately, Mr. Arkaden is far from the greatest evidence of that.

Written and Directed by Orson Welles