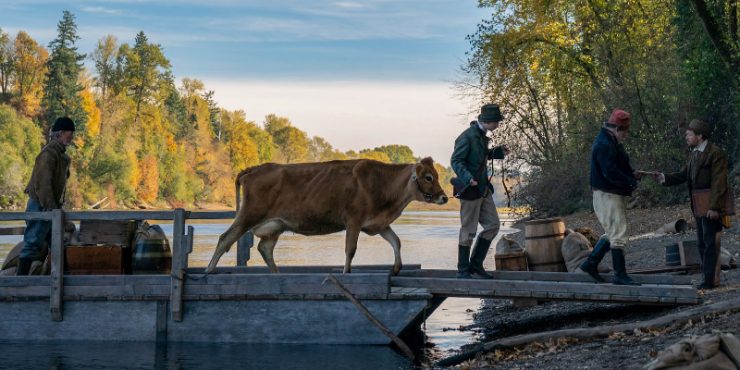 The opening image of First Cow is of a massive cargo ship gingerly easing its way down a peaceful river. The ship itself is not peaceful, it’s loud and lumbering, but it’s far enough away to not cause any real disturbance. Director Kelly Reichardt allows to see the full length of the ship as it passes across the frame, its rumbling course becoming almost tranquil. It’s a wonderful metaphor for Reichardt’s career as a conductor of glacially paced dramas, but also a symbol for American enterprise. Monolithic, insurmountable, an unstoppable force that vanquishes all even when you see it coming from miles away. If you’re familiar with Reichardt’s work then you now that she prefers to tell her stories on a much smaller scale, but First Cow‘s opening shot gives you a glimpse of the vastness with which she views her “small stories”.

The titular cow (her name is Eve) is a beauty with soft, endearing eyes and a lush, burnt orange hide. She arrived in Nineteenth Century Oregon so the English Chief Factor (Toby Jones) could have some milk to put in his tea. She traveled from a different continent, losing her mate and her calf in the journey. Upon arrival, she’s tied to a tree outside the Chief Factor’s home and given little attention outside of tea time. Her presence brings fanfare across the port town, becoming the talk amongst the haggard men inside the local watering hole. Cookie (John Magaro), a shy, nomadic chef hears of the cow, and he dreams of the culinary creations he can make with her milk. Cookie has traveled America as a hired cook for fur trappers, a dangerous job with dangerous men with paltry working conditions. His ambitions are not robust, preferring the satisfaction of making good food to making a living out of it, but news of the cow brings him hope.

It’s not till he meets King-Lu (Orion Lee), that thoughts of personal benefit enter his mind. King-Lu is from China, who came to America specifically for opportunity and prosperity. He is not opposed to a little risk if it helps attain a fortune, and he also has the foresight to envision the importance of the ever-growing consumer population within an infant United States. It is King-Lu who convinces Cookie to begin secretly milking the Chief Factor’s cow, and to use the milk to produce rich oily cakes, a delicacy unlike anything else in this part of the country. Cookie’s cakes sell instantaneously, quickly garnering a large and rabid clientele. The business becomes lucrative as their prices rise with the ferocious demand. Even the Chief Factor himself becomes a fan of the cakes, enlisting Cookie for personal orders at his estate.

Being an inherently American story, Cookie and King-Lu’s success leads to trouble as they must do all they can to conceal the source of their popular new product; but amazingly, First Cow is not a story about greed. It is instead about the purity of craftsmanship and persistence of survival. The two men enjoy the money they make from the oily cakes, and even discuss possible expansions in California if they’re able to raise the appropriate amount of money, but they don’t harbor empirical dreams. It’s the purpose that they find in making something useful that proves addictive. For the first time, they are made to feel special for what they do – Cookie’s cooking and King-Lu’s gregarious business sense. Even the stolen milk is coming from a cow that is otherwise unloved and unnoticed. Cookie’s affection for her is obvious on his visits. He understands her sorrow, and even understands how little his talent is without her product.

There’s little room for cynicism in Reichardt’s films, their sincerity is a classic calling card within her stripped down style. With the Chief Factor, First Cow doesn’t expose the unfairness within the wealthy’s exploitation of the working class as much as it simply displays it for what it is: a cyclical relationship where Cookie and King-Lu’s value is measured as far as the taste of their cakes. The two men certainly worry about possible consequences for their theft, but there’s no agonizing because they know that they are doing what is necessary to survive. As events unfold, things play out as you’d expect; the usual winners come out on top, and vice versa. The radical aspect of Reichardt’s films come from what she doesn’t show, withholding the usual conflicts that we’ve come to expect, creating an extra layer of tension in the filmmaking itself.

This is a truly beautiful film. One that can argue for the wonders and the horrors of American life in one breath. Its rustic settings, decrepit and damp, cry out against the more common images of the American West. There’s less masculinity and more tenderness, with heroism coming not from strength but from empathy. Even the cow, willing to let herself give milk to Cookie, is an image of generosity so rarely seen in films about American accomplishment. First Cow understands the rarity of these images. There’s hardly ever a moment for the audience to indulge in true tragedy but Reichardt does give us our moments of heartbreak, and in within the realities of American history, First Cow seems almost utopian. The time limit of Cookie and King-Lu’s fortune is, for Reichardt, the true American tragedy.

I long believed Reichardt’s films to be meandering and pretentious, but have now found them to be a tremendously refreshing alternative to mainstream filmmaking. The modest, quiet nature of her stories belie an extreme passion. First Cow feels like a real triumph, a film untethered either to contemporary film pacing or the constraints of her own style. It is a heartfelt ballad for overlooked talent, unsung charity and dependable companionship. The story and characters are simple, but the themes weaved within them are complex. The brutality of capitalism is almost quaint compared to the humanity of Cookie and King-Lu, and Reichardt shines equal light on their window of success as their inevitable downfall.