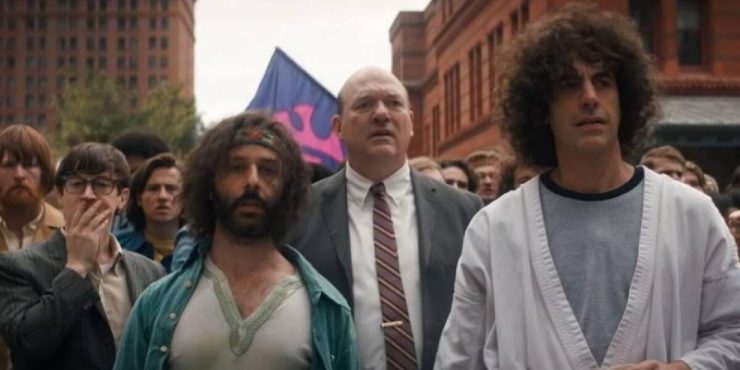 The reason historical period drama is such a popular prestige genre is that it can be either nostalgic or aspirational, pleasing a broad audience no matter what their predispositions may be. That is true of The Trial of the Chicago 7, but it also has the benefit of being irrefutably resonant with contemporary headlines involving political protests, police brutality and the hostility of the establishment against opposition. Writer-director Aaron Sorkin originally wrote the script in 2007, over a decade before our current sociopolitical hellscape. In that climate – the waning years of President George W. Bush and, coincidentally, the year after the end of Sorkin’s incredibly popular White House TV drama The West Wing – Chiacgo 7 would have been just one in a trend of American History courtroom dramas that highlights truth spoken to power. It’s all to say the undeniable truth: this film matters more now than it would have in 2007.

I don’t say that to discredit all the things that work in Chicago 7, and it’d be hard to believe that Sorkin did not make adjustments in an America that elected Donald Trump president. Relevance to present-day news stories will always boost historical drama, but it’s charming to me that Sorkin, Hollywood’s most infamous Monday Morning Quarterback with regards to national civic responsibilities, has his first legitimate argument for being prescient. His film – which documents Richard Nixon’s Department of Justice choosing to prosecute seven anti-Vietnam War protestors on charges of conspiracy to incite violence during the 1968 Democratic National Convention – is the best of what he can do: a precisely structured account of US history equipped with memorable, nuanced characters who all serve at the pleasure of Being On the Right Side of History.

Chaffing at the bit from the moment of Nixon’s inauguration, freshly minted Attorney General John Mitchell (John Doman) taps the young Richard Schultz (Joseph Gordon-Levitt), an assistant AG, to be lead prosecutor on a case against high-profile Vietnam War protestors in a flexing of muscle against a cultural revolution that was rumbling throughout the country. The charge was meant to suggest that protestors initiated violence with police officers in a bloody collision that played out publicly during the DNC (or, as you may have noticed, several months before Nixon was even elected). The prosecution cherry-picks leaders from various anti-war movements, including Yippie leaders Abbie Hoffman (Sacha Baron Cohen) and Jerry Rubin (Jeremy Strong), SDS leaders Tom Hayden (Eddie Redmayne) and Rennie Davis (Alex Sharp), and noted conscientious objector David Dellinger (John Carroll Lynch).

Grouping the likes of Hoffman and Hayden together ignores the ideological differences between the two activists. Inexplicably, prosecutors also charge Black Panthers co-founder Bobby Seale (Yahya Abdul-Maheen II) in the trial, despite only being present in Chicago for less than a day during the convention and having no involvement in the demonstrations that turned violent. It becomes clear to the defense and prosecutors alike that AG Mitchell is attempting to intimidate a wide swath of disgruntled social groups who oppose the Nixon administration, from anti-war to Black Power – he’s trying to kill thousands of birds with one gargantuan stone. Two more, much less inconsequential activists (played by Noah Robbins and Daniel Flaherty) are charged, culminating in eight defendants (**SPOILER ALERT** the “Chicago Seven” doesn’t include Seale because his connection is so tenuous it eventually leads to a mistrial).

Going from fighting police in the streets to confronting justice in the courtroom, the defendants are given little to no reason that they will get anything like a fair trial. This culminates in the appointing of Judge Julius Hoffman (Frank Langella), whose complete incompetence (he has trouble simply remembering the names of people in the case) is matched only by his hostility for the Chicago 7 and all that they represent. If that weren’t enough, the group is plagued by constant in-fighting between the straight-laced Hayden and the incendiary Hoffman, whose differences outside of the trial does not translate into communion within it. Defense lawyer William Kunstler (Mark Rylance) does his best to wrangle his rowdy clients while also contending against a DOJ kangaroo court, but the defense quickly finds itself beleaguered by the US government’s vast bureaucratic resources.

The 2007 intention was for Steven Spielberg to direct Sorkin’s script but in thirteen years, the former playwright’s Hollywood clout has risen to a substantial enough point that he can forego name directors and get the job done himself. The film does smack of Spielberg-ian triumph in its more rousing sequences, unafraid to prey upon on the audience’s more vulnerable soft spots to win points. As a director, he is certainly more dramaturge than cinematic virtuoso, but Chicago 7 beats to the rhythms of his greatest screenwriting successes. The rhythm lies not only in his infamous dialogue, but also in the way scenes are constructed (editor Alan Baumgarten puts on a clinic), and the way arcs are paid off. Sorkin has decades of experience dangling narrative carrots in front of viewers that lead to gluttonous dessert by the story’s end.

The Trial of the Chicago 7 is not without Sorkin’s lesser impulses. It still reinforces his obsession with Important American Men (throughout his films and series, the only women worth writing are the ones that share the masculine qualities of his protagonists), and it still takes bizarre sidebars in which deeply troubling events are broken down using his favorite love language: catchy repartee in which political leverage shifts sentence-to-sentence. Many audience members may cringe during a tense moment in the middle of the film where one white character tells another white character to “Keep reading James Baldwin” in the midst of a major miscarriage of justice. It’s so obvious how much words matter to him. So much so that a near fist fight between Hayden and Hoffman descends into a debate about possessive pronouns and noun modifiers.

In Sorkin’s world, erudition – and often, downright snobbery – are not only necessary but commendable eggs in the omelet of virtue (I write that sentence with glee knowing that he would hate it!). Despite all this, he is still Hollywood’s most powerful screenwriter, mostly because of his incredible talent. The Trial of the Chicago 7 works so well because it is less interested in re-litigating past indiscretions, and more concerned with the cauldron that is the American justice system. Directors like David Fincher and Danny Boyle made great hay out of turning up the volume on Sorkin’s bitchy arrogance, but left to direct himself, Sorkin surprisingly takes a backseat to his material, allowing an astounding ensemble cast to bring humanity to this harrowing story of monolithic authority and its destruction of the little guy.

Baron Cohen and Redmayne have the film’s best monologues, but Chicago 7 is a film staffed from top to bottom with incredible performances. Even Langella’s ever-frustrating judge is a masterful take on ignorance inflated by unearned achievement. Bobby Seale is an unwitting participant in the proceedings, but Abdul-Mateen still takes the time to make Seale’s confounded rage as palpable as anything else in the film. A surprise cameo by **SPOILER ALERT** Michael Keaton as a star witness goes beyond stunt casting and takes advantage of Keaton’s slithery stoicism to create the best kind of suspense in a courtroom drama  – whose side is he on really?

I’d like to think that America will someday be in a place where films like The Trial of the Chicago 7 are no longer intensely relevant. Where a story about the US government’s attempt to undermine opposition protest and racial unrest with police brutality and predetermined criminal trials doesn’t come uncomfortably close to reality. 1968 may be the most recent year that rivals the boiling crucible that is 2020, but the unfortunate truth is that this film’s relevance speaks more to the Groundhog Day-like persistence of America’s inequalities than it does of the veracity of Sorkin’s finger on the pulse of citizen unrest. But the film did get its release (now widely available on Netflix) in 2020, and it does speak spiritually to our time, a confluence that benefits the film, but also highlights why its story is so important.

Written and Directed by Aaron Sorkin