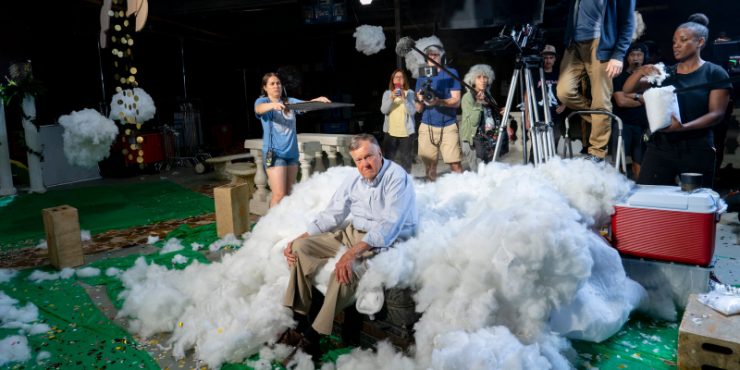 Attention is Kirsten Johnson’s specialty. Her 2016 film, Cameraperson, was a masterpiece of attention, a collection of footage shot over a decades of a career as a documentary cinematographer. Johnson called the film a memoir, a life’s story told through copious amounts of work. What stands out is the care and tenderness Johnson has for the subjects that she films. That film travels several continents over many years, but also includes home footage that Johnson shot herself. Dick Johnson, her father, is very much a supporting player in Cameraperson. He takes a backseat to Johnson’s mother, Catherine Joy, whose Alzheimer’s diagnosis makes her one of the film’s more tragic participants; but Dick’s presence is a welcome respite to the film’s sense of melancholy and tension. He is a large, jovial man who comes across as an active and easygoing grandfather. His promotion to leading man in Dick Johnson is Dead may be unexpected, but Johnson spends the entire film validating her decision.

A project in memorial as explored through morbidity, Kirsten decided to film fictional versions of her father’s death. The scenarios range from falling violently down the stairs or on a Manhattan sidewalk, to bleeding to death after being struck by a piece of wood. They all entail an element of the macabre, with the shocking violence of death being played for laughs. The plan was to keep filming these imaginative deaths until the actual event occurred, but then things go even further: filming sequences in “Heaven”, a paradise of oversized glitter and pillow-filling clouds. Dick’s amiability and playfulness make him a perfect candidate for daughter Kirsten’s absurd production. It becomes clear that Dick, widowed and at an advanced age, would find any activity with his daughter to be worthwhile, even if that activity is faking his own death over and over.

It wouldn’t be accurate to call Dick Johnson is Dead a “sequel” to Cameraperson, but there is a spiritual connection. For Kirsten Johnson, there is a poetry to telling a life story through cinema, and in both films, she prefers the impromptu moments of other peoples’ lives to express the fullness of her own. Dick Johnson is Dead is the more sentimental film, because it is also the more personal. Kirsten’s care for Dick (the first act of the film deals with his moving out of their sprawling, rural family home and into her one-bedroom apartment in New York City), her attention to him, consumes her life. Making a film about that seems like the most natural thing in the world for her. In her attempt to explore her father’s immortality, she actually begins exploring her own, and the line between life and movie begins to blur.

You would expect the end of this film to be a bit weepy, but the way Dick Johnson is Dead brings you to that emotional summit may surprise you. Dick, always laughing and smiling, reveals his condition more as the film goes on. He forgets things, short-term and long-term, and there is a big heart attack in his past. He wanders at night, trying to leave the house on his own. A retired psychiatrist, Dick knows a thing or two about the human mind, but even he can become overwhelmed by his sudden bursts of confusion. Mostly, though, he is swell company, a good sense of humor and quick to fall asleep in any chair or couch provided for him. Kirsten’s lingerings on those details are the highlight of Dick Johnson is Dead, the tiny attributes that make him unique also make him the perfect father. That perfection, so quaint and modest, is something that Kirsten dreads losing, so why not capture it forever in a film?