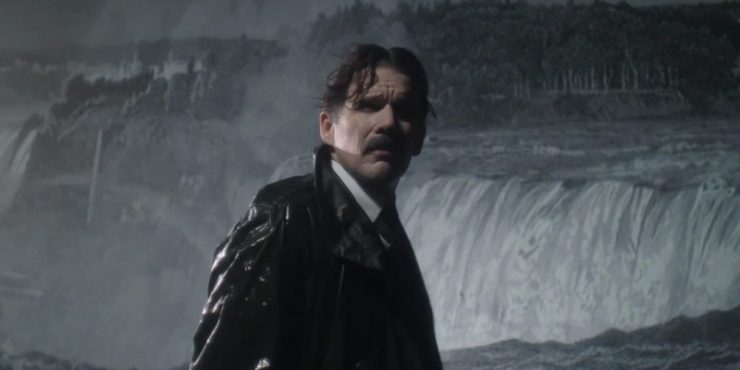 Near the beginning of Tesla, the film’s narrator quantifies Nikola Tesla’s legacy in its simplest terms: through its Google search results. He has over thirty-four million results, we’re told, including a multitude of variations on the same four pictures that have established Tesla’s image as a sleek, mustachioed man of science. Thirty-four million seems like a lot, until our narrator informs us, not five minutes later, that a Thomas Edison Google search yields sixty-four million results – with a bounty of pictures of the famed inventor all over the world and in front of his creations. Tesla and its director, Michael Almereyda, have a preoccupation with evaluating these historical figures with contemporary measurements, connecting the dots between the technological excitement of the late nineteenth century and the technological glut we encounter today.

Our narrator, it turns out, is Anne Morgan (Eve Hewson), the daughter of Gilded Age banker J.P. Morgan (Donnie Keshawarz), and the love interest of our Tesla (Ethan Hawke). The cheekiness of having Anne Morgan give us Google statistics is by design, an intentional affront to our expectations. The casting of Hawke plays into these schemes as well. Hawke, having completed the transition from Slacker Generation icon to veteran actor’s actor, suits up as the Eastern European inventor and engineer, but imbues the eccentric figure with rock star glamour. Talks of coils and alternating currents are inevitable, but less so is seeing Tesla perform a karaoke performance of Tears for Fears’ “Everybody Wants to Rule the World”. Hawke’s versatility, his ability to shift between intensity and vulnerability, make him one of the few actors who could pull off this magic trick.

The film’s first half deals with Tesla’s battle with the irascible Thomas Edison (a wonderful Kyle MacLachlan) over direct versus alternating current electricity supply. It’s a battle that Tesla wins with the help of industry titan George Westinghouse (Jim Gaffigan), even if his victory is soured by learning that money has run low. The film’s second half concerns Tesla’s experiments in Colorado with the Tesla coil. At this point, he is beholden to J.P. Morgan’s money to continue his work. He is also enraptured by world-famous actress Sarah Bernhardt (Rebecca Dayan), whose regal beauty and astounding talent have overtaken him completely from the moment he sees her. His brilliance gives way to his obsessions, and he becomes consumed by the very inventions that made him so famous.

Anne Morgan is tertiary to the narrative, though Almereyda makes sure to keep her central to the story’s structure, frequently returning her to narration duties, imbuing her with an omniscience that Morgan, herself, never could have had. In fact, Tesla is quite forthcoming when it comes to confessing when it has crossed over into fiction and outside of the facts. The actual history of Tesla is valued highly but there isn’t much reverence for it, and Tesla will take ample opportunity to delve into fantasy where reality falls short. Not that Tesla is want for scientific detail, allowing Hawke and several others monologue philosophically about high frequency waves and electric conductors. The way Almereyda’s script dumps out this information – and the frequency that it spins off into make-believe – makes it hard to say whether the film actually finds all of these facts interesting or is simply poking fun at the fact that anyone found them interesting to begin with.

It’s all to say that Almereyda wants you to be off balance. His previous biopic, Experimenter, also took creative approaches in telling the story of Stanley Milgram, the social psychologist. Both Experimenter and Tesla take mercurial side roads and have an eclectic mix of film tropes to tell stories of unusual men ahead of their time. For Tesla, his spiritual connection to his work prevented him from taking full advantage of the monetary benefits of his revolutionary inventions. Idealism prevented him from becoming truly rich like the capitalists Morgan and Edison. It also prevented him from fully committing to Anne Morgan, a woman of great insight and intelligence, who showed appreciation and understanding both for Tesla’s intellect and his work. Tesla feared that his idealism would succumb to the money of Anne’s father, which ultimately, it did.

“I see machines as an extension of man,” Tesla tells Anne upon their first meeting. It explains a lot about the extremity of his work ethic and also about the mechanical ways in which he handles his personal relationships. Filtered through Hawke’s graveled, cigarette-chewing, Tom Waits voice, every word and movement seems instilled with pain and indignation. Tesla views its hero as a man who loved the humanity inherent to technology, but whose contributions were later used to heighten technology’s inhumanity. It has Tesla considering this existential crisis in real time, or more specifically, outside of time. His human impulses are reduced to lusting after beautiful actresses and searching after lightning strikes in the vast fields of Colorado Springs. In his mind, his work would change the world, make wars obsolete and advance the cause of human ingenuity. All in a heap of Google search results.

Written and Directed by Michael Almereyda