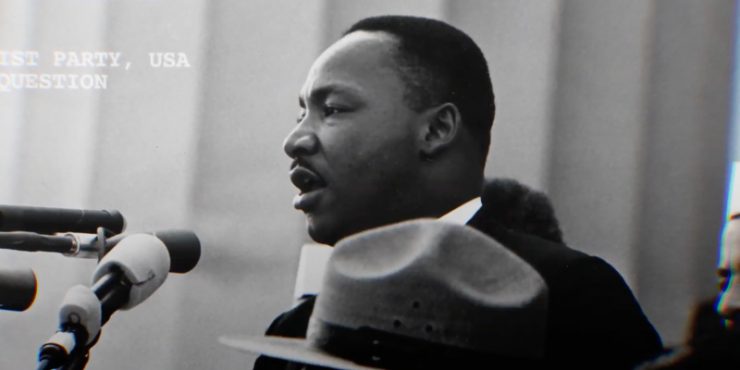 MLK/FBI is being broadcast virtually as part of the 58th New York Film Festival, and was available to rent and stream through the virtual theater at the Film Society at Lincoln Center

The declassification of FBI files on Dr. Martin Luther King, Jr. provides a bulk of the content in MLK/FBI, a piercing and exacting documentary which gets to the heart of the bureau’s singular mission to undermine the cherished civil rights leader. It’s well-known now that the bureau, and its irascible leader J. Edgar Hoover, were exhaustive in their efforts to tarnish King’s status both with the American public as well as the White House. This film, from veteran documentarian Sam Pollard, goes deep into the origins of this mission – a mission shrouded in hollow pronouncements of safety for citizens and protection of political sovereignty – to reveal a disturbing preoccupation with discrediting King and disavowing the Civil Rights Movement. Perhaps the most unsettling thing about MLK/FBI is just how little has changed since the turbulent 1960’s.

King is perhaps the most significant civilian in American history. His commitment to non-violence and his leadership in the fight against racial segregation has made him a cornerstone of US history, a frequent example of America’s appeals toward decency and grace. The first thing that MLK/FBI takes pains to make clear is this: King was as feared in his lifetime as he is revered today, dispelling the oft-trumpeted notion that King’s movement was popular and bipartisan when it happened. As is often the case with important Black figures in American history, white media performs calisthenics to show idealogical support in the past-tense while withholding that support when it was needed the most. King’s grip on the world’s conscience made the American public very uneasy and that uneasiness waded into the political arena.

Enter the FBI, whose initial interest in King came from a belief that he either was or was being influenced by communism, triggering the bureau during the height of the Red Scare in the 1950’s. The FBI and Hoover mortgaged the legitimate fear of Soviet takeover to perform surveillance on King, whose success in mobilizing African Americans in the South began making them very nervous. When it became clear that communism was not a credible accusation to levy against King, the FBI instead turned toward his personal life. King’s infidelities – widely known but never heavily disclosed – became the obsession of Hoover and the FBI, hoping to expose the civil rights leader as a morally bankrupt hypocrite. The operation included a massive, labor-intensive enterprise of phone-tapping and bugging, resulting in the accumulation of supposedly incriminating tapes.

Like all great historical documentaries, MLK/FBI refuses to say explicitly what the facts can say for themselves, but Pollard and writer-editor Laura Tomaselli frame their footage and interviews perfectly as to remind the audience of what is at stake, both then and now. At all turns, civil rights movement are accused of violence, subversion and perversion in an attempt to scare the public into preserving a status quo. Pollard includes no footage of someone calling J. Edgar Hoover a racist because it’s not only redundant, but besides the point. For Hoover, the takedown of King was a move of self-preservation, a holding off of a racial reckoning that many white Americans – consciously or subconsciously – believe is to come when equality is reached. The surveillance served little more purpose than to reinforce a confirmation bias that was held by mainstream America.

Pollard’s interest lie less in discrediting the FBI than it does in using the bureau’s own history as a prism for America at large. Of the eight interviews included throughout the film, former FBI head (and infamous Trump enemy) James Comey makes a short but memorable appearance to state that the surveillance of King is the darkest period in the institution’s history. Their collection of information proved to have little do with national security, try as they might to keep communism as a central talking point in their self-justifications. What is obvious is the nature of King’s power – the sway of his charisma and the profundity of his voice – frightened their sensibilities and disrupted their visions of what America should be. Even his sexuality, shocking to famously conservative men like Hoover, was threatening their perceived notions of American domesticity.

Most Americans should be shocked when they learn the amount of effort that was taken to bring down King. This is not limited to the FBI, but also multiple White House administrations, who oversaw Hoover’s actions and did nothing (those presidents were Democrats, by the way). The vendetta against King and the Civil Rights Movement contrasts greatly with contemporary treatment of King’s legacy, which is unequivocal in its support and acceptance, even if true understanding still eludes most of the public. MLK/FBI is precise and unflinching in its unmasking of American history, which tries to give itself ample amounts of credit for overcoming injustices it fought so hard to maintain. Perhaps this is why we find ourselves out in the street again, in the Summer of 2020, fighting against the same bigotry. And why we must summon our strength to overcome an institution that will use all the resources at their disposal to insure that they won’t lose.