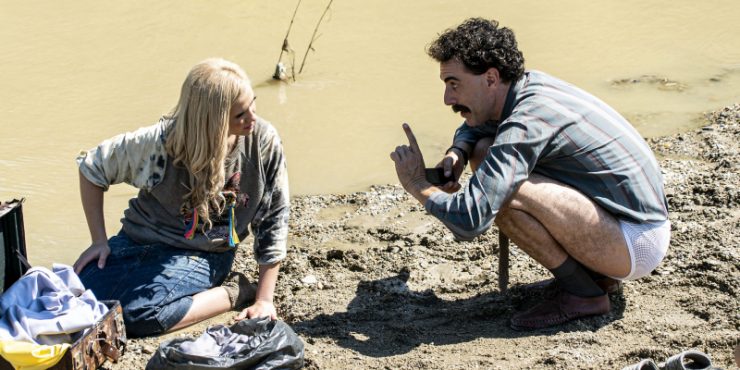 Shock value, in and of itself, isn’t Sacha Baron Cohen’s main interest, though his notorious interviews often leave his subjects hapless and compromised in ways that can make your jaw drop. Exposing hypocrisies throughout the UK and US, Baron Cohen understands that the easiest way to get people to unearth their deepest prejudices is to directly ask them about it. He enjoys becoming foreign figures, whether it be the cockney doofus Ali G, the militant Israeli anti-terrorist expert Erran Morad, or his most famous character, Kazakhstani journalist Borat. Disguised as an overseas man with orthodox beliefs and a healthy curiosity for American freedoms, conservatives will frankly explain the horrors of their racist beliefs, imparting explosive rhetoric with the blithe affability of a grade school teacher. This recipe has fueled much of Baron Cohen’s industry of exhibition, and is very much the fuel which his latest, Borat Subsequent Moviefilm, runs on.

The full title is Borat Subsequent Moviefilm: Delivery of Prodigious Bribe to American Regime for Make Benefit Once Glorious Nation of Kazakhstan, which tells you everything you need to know about the film’s plot. Imprisoned since the original 2006 Borat film for bringing shame to his home country, Borat is asked to go back to America to give Mike Pence Kazakhstan’s most famous chimpanzee, Johnny, to curry favor with President Trump. Following a tragedy in travel plans (I’ll leave you to discover it for yourself), Borat settles for using his fifteen-year-old daughter, Tutar (a tremendous Maria Bakalova), as the bribe (Borat mishears “bribe” as “bride”). Transforming Tutar from a feral miscreant to a Fox News-style bombshell takes some time, including trips to hairstylists and etiquette experts who bristle at their eccentricities. When they attend a debutante ball in Macon, GA, Tutar’s period makes an unwelcome (and bloody) appearance as they dance for the horrified attendees.

The meat of the film takes place in Baron Cohen’s usual comfort zone: interviewing unwitting participants in his game of satirical subterfuge. Borat and Tutar’s travels are mostly in Red State America, where Borat’s caustic misogyny and rampant anti-semitism is met mostly with forced smiles and incremental degrees of discomfort. One may be reminded of Nathan Fielder’s brilliant television program, Nathan For You, which deftly attacked the vulnerabilities of American politeness. That show was about disclosing the dangers of Twenty-First Century capitalism, where Baron Cohen is all about bringing fringe and radical ideologies to the center stage. In giving them the spotlight, Baron Cohen not only mines comedic potential, but exposes the shallowness of their ideas. Under the heat, they usually wilt.

The issue with doing this during the Trump era is that fringe ideologies have already become dangerously mainstream. When Baron Cohen spends several days in the rural home of two QAnon conspiracy theorists, their spewing of psychotic racism is not unlike what you would find every day on cable news or from the White House. The humor of Borat Subsequent Moviefilm is solely dependent on the gullibility of its participants and not by the outrageous things that they say. The standard for conservative behavior has dipped so low that this film becomes like shooting fish in a barrel, a series of set-ups for pranks and sight gags, and falling short of legitimate commentary. Baron Cohen is trying to make specific points about the tipping point that America currently finds itself in, but it’s difficult to really understand what those points are.

Not that these sequences are not funny. There’s still something hilariously satisfying about watching Pastor Jonathan Bright try to free himself from a logical trap, telling Tutar that he will not approve an abortion even if her father is the one who got her pregnant. Or an already much-reported scene involving Rudy Giuliani which I won’t spoil here. Borat Subsequent Moviefilm is at its best when it’s striving for laughs instead of schadenfreude, and the thesis that we are living in a constant state of absurdity is the film’s strongest one. Watching Baron Cohen, disguised as a MAGA country singer, easily coax a crowded rally to chop up journalists “like the Saudis do”, is a classic Baron Cohen bit, a clever call from inside the house of our nation’s most threatening populations.

Playing Tutar, Bulgarian actress Maria Bakalova performs a terrific balancing act between being a female facsimile for Baron Cohen’s Borat and giving the film an unexpected boost of tenderness. Tutar’s adoration for her totalitarian father has surprising moments of sentiment, a perfect antidote to the torrent of American divisiveness shown throughout the film. Her performance is complemented by appearances from a babysitter named Jeanise Jones and Holocaust survivor Judith Dim Evans, who both break the film’s parade of disrepute, and appeal to humanity and decency. It’s in these scenes where it’s most obvious that Baron Cohen is not a pessimist but is, in fact, a moralist who believes in Americans’ innate goodness. The messaging is much more direct than the original 2006 Borat film, even if the predecessor was a much more incisive satire.