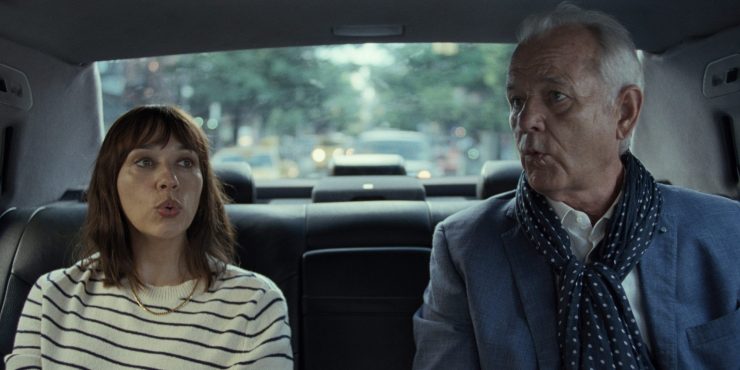 The dynamics of a complicated father-daughter relationship lay at the heart of Sofia Coppola’s latest film, On The Rocks. On the one end, we have a beacon of New York City liberal motherhood played by Rashida Jones – equipped with a Strand tote bag and an impossibly large Manhattan loft apartment. At the other end, we have her charming father, played by Bill Murray, whose decorum plays by old fashioned rules where women were made to be complemented on their looks and feelings were meant to be locked away behind caustic wit. Both people seem obscenely rich in a way that On The Rocks has no interest in really exploring, even if there is the suggestion that their privileged status is what makes room for their outsized insecurity and advanced existential worry.

This is nothing new for Coppola, who has a fascination with materiality and the flimsy ways it shields inner suffering. This isn’t even her first father-daughter movie. That was 2010’s Somewhere, where Stephen Dorff and Elle Fanning wandered aimlessly around the Chateau Mormont like characters searching desperately for a plot (I must confess I remember close to nothing about the movie since I saw it ten years ago, other than it seemed to be about nothing). Coppola’s disdain for outsized drama can betray her. She prizes those small moments between characters that showcase humanity, but those same characters’ über wealth can leave these appeals to pathos feeling incredibly out of touch. Marie Antoinette was perhaps her greatest dissection of gluttony and opulence, but On The Rocks mostly falls short.

The set-up is rather basic: Jones’ Laura fears that her congenial husband, Dean (Marlon Wayans), may be having an affair with his co-worker, Fiona (Jessica Henwick). Murray’s Felix can’t wait to jump on the opportunity to accuse his son-in-law of infidelity, quickly weaving large conspiracy theories of betrayal and misdirection. Laura wants to ignore her father – after all, Felix’s own record with fidelity is at best checkered – but finds herself becoming concerned, as more and more red flags pop up. Dean’s success in his new job keeps providing him with excuses to stay out with Fiona and not come home. So she allows Felix to talk her into playing detective, following Dean after work and on business trips, checking his financial statements. More evidence of wrongdoing arises, and Felix is adamant that Laura stay ahead of the situation and avoid embarrassment.

Sofia Coppola has exorcised personal demons in her films before. Most famously, Lost in Translation was a loose document of her eventual divorce from Spike Jonze (with Giovanni Ribisi standing in for Jonze). On The Rocks is most interesting as a reconciliation with her own playboy father, Francis Ford Coppola. The degree to which the film is autobiography could be disputed, but the scenes of conflict between Jones and Murray are the film’s strongest moments, the ones that feel most close to home. Murray is playing the hits throughout his performance, but Coppola also provides him with a handful of smug monologues about his personal thesis on male nature. He also has a plethora of trivial anecdotes to support it. Felix’s attempts to relitigate his own past indiscretions by repairing Laura’s marriage exacerbates tensions. The love-hate dynamic passes from Laura to the audience, despising Felix’s behavior while also finding him to be the most entertaining part of the movie.

In her more recent films Coppola had tried to circumvent narrative by overpowering with mood and effervescent 2000’s soundtracks, so the more mainstream structure in this film may come as a surprise. On The Rocks shows that she’s willing to commit to conventional plot lines, but not that she’s ready to pay them off in meaningful ways. Substantial closure eludes Laura and Felix by the film’s end, and the whole exercise feels like a feature-length red herring. Murray and Jones, both veterans of comedic timing and complex characterization, are doing good work here. It seems obvious that Coppola really wanted to make a movie solely about the two of them, but like Felix, the film obfuscates with more simplistic storylines. We manage to avoid the aimlessness of Somewhere only to end up in a story that feels substance-less.

Written and Directed by Sofia Coppola