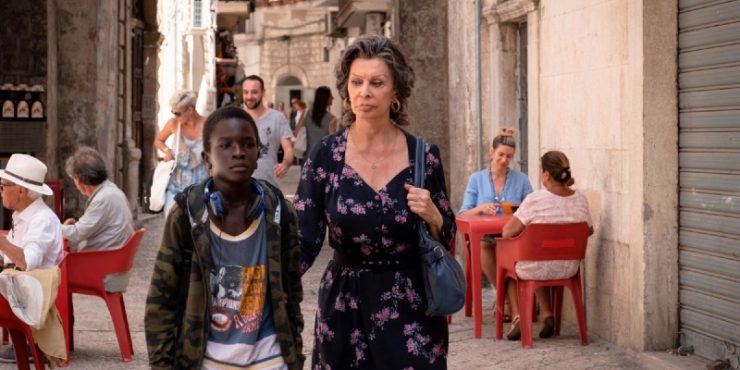 Keeping track of all the clichés used in The Life Ahead can be tiresome. Perhaps, you could turn it into a drinking game, if you wanted to add a dose of excitement that you certainly wouldn’t get from the film itself. We have a wayward youth and a no-nonsense geriatric. A Muslim and a Jew. A petty thief and a hooker with a heart of gold. A young black boy and an old white lady. The Life Ahead severely and insecurely stresses the polarity of its two protagonists, prepping us for a story that could telegraph itself without all of their unnecessary guidance. All that aside, this is also a story of black delinquency counseled by white benevolence, the well-worn narrative device used in many a hack screenplay.

The overwhelming familiarity of the story gets the movie off on the wrong foot, and it never really recovers. It’s hard to pinpoint where it all goes wrong, but it does feel like the only thing that The Life Ahead has going for it is that its heart is in the right place. It stars Sophia Loren, in her first starring role in over a decade. Directed by her son, Edoardo Ponti, Loren’s performance is pure star power, but very little substance. She plays Madame Rosa, a Holocaust survivor turned Parisian prostitute who has now, in her advanced age, turned to nannying the children of other prostitutes. Her reputation in her Italian village precedes her – she’s tough but responsible, disciplined but attentive. Her life experience is enough for several lives, but she still feels ill-prepared when asked to care for the young Momo (Ibrahima Gueye).

A Senegalese orphan, Momo has been kicked out of schools for violence and has passed through several foster homes. His only stability is working for a drug dealer who uses Momo’s youth as a perfect disguise for distribution. His stay with Madame Rosa starts off rocky. He has no patience with her rules and she has no time for his defiance. It isn’t until Momo learns of her experiences with Auschwitz in World War II that their bond begins. Truth be told, the obligatory communion between Momo and Rosa feels more motivated by narrative necessity than it does by some inherent emotional shift within the characters. Like most of The Life Ahead, actions happen because the film dictates that they must.

I struggled to find even a single honest moment here. Loren, a genuine cinema legend, is the only thing that separates the story from all the previous iterations. Anytime the film does make an attempt to address the obvious issues of racial tension or religious persecution, the attempts are tepid and shallow. It never feels like there’s anything substantial to say. The film is based on a Romain Gary novel (in its original publication, in the 1970’s, Gary used the pseudonym Emile Ajar), which seems like a better vehicle for this story. There simply isn’t enough external action to justify a feature-length film, even with Loren pulling the kind of weight that she does. Appeals to sentimentality are not bad in and of themselves, but they still require strong characterization. You need to care about the people to feel it.