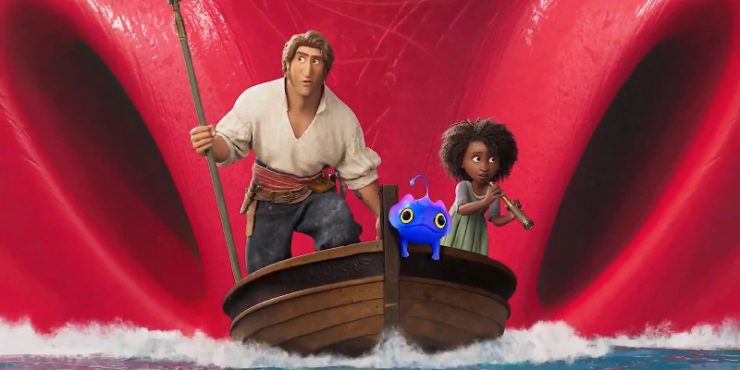 One would have to search the high seas for a Netflix original animated film that has caught with critics and audiences. Last year’s The Mitchells vs. the Machines is an exception, but that one is also a Sony Pictures Animation film that Netflix bought when theater-going still seemed far away. Netflix’s original movies always get the short end of the stick when it comes to promotion, instead preferring to put that entire budget towards getting people to tune into a 150-minute episode of Stranger Things. For a studio that boasts often about having a “new movie every week”, there’s really only a select few that they’re willing to put a hefty campaign behind, and that’s usually when they think they have a chance to win Best Picture (which has still never happened). Netflix’s animated films meet an even worse fate, coming and going with little attention.

Which is a real shame for The Sea Beast, a swashbuckling pirate comedy about a group of “hunters” who spend their lives patrolling the deep edges of the sea finding and killing dastardly sea monsters. There is one monster whose reputation reigns above all others: The Red Bluster.  Massive in scale and ruthless in attack, the Red Bluster has gained many enemies in the town of Three Bridges, an ornate aristocracy that finances the hunters to keep its expansive peasant population calm. From a very young age, the people are taught of the gruesomeness of the sea beasts and the valor of the hunters. There is nothing more honorable in this society than being a hunter, and where perishing in the hunt means dying a good death. Maisie Brumble (Zaris-Angel Hator) is a young orphan who dreams of being a hunter herself. Having lost her parents to sea beasts, she wishes to board a ship and avenge them.

The most notorious of all the hunter ships is The Inevitable, led by the scowling Captain Crow (Jared Harris), who has an Ahab-level obsession with finding and killing the Red Bluster. Crow has spent decades searching, and he has the scars and eye patch to prove it. He’s accompanied by his loyal, peg-legged first mate, Sarah Sharpe (Marianne Jean-Baptiste), and his adopted son, Jacob Holland (Karl Urban). Holland, another orphan who lost everything to the sea beasts, has grown into an exceptional hunter. An early action set piece shows off his command and authority in a crisis, and it’s clear that he is destined to be the captain of The Inevitable when Crow ultimately retires. With Holland’s skill and Crow’s precision, they are finally on the precipice of killing the Red Bluster.

One small wrench in their plan is the arrival of Maisie, who stows away aboard the Inevitable in an attempt to force her way onto the crew. Holland finds the ship (and their mission) to be much too dangerous for a young child, but Crow insists on her staying, seeing the same enthusiasm Holland had as a young boy. As they continue on their mission, they soon encounter the Red Bluster, and that’s all I’ll say for now. The Sea Beast‘s plot pivots into a buddy comedy between Maisie and Holland, but there is a delight in how that occurs that I won’t spoil here. Like many good films of its ilk, The Sea Beast cleverly reorients your sympathies as the story unfolds, as bold truths are exposed and the character of many is revealed.

This film is directed by Chris Williams, who previous directed (or co-directed) Big Hero 6 and Moana. Those two movies are excellent Disney films that execute the familiar Disney game plan of mainstream storytelling. The Sea Beast is a bit more unique, stylistically and narratively, for being free from Disney’s clutches. The film’s story fits neatly between the How to Train Your Dragon franchise and Peter Weir’s Master and Commander: The Far Side of the World, keeping its feet planted in both childish fantasy and rugged danger. The animation style, which pops with rich color and vibrant texture, takes advantage of the roiling seas, grotesque creatures and opulent royalty throughout its story, painting a rich canvas of adventure and discovery.

The central metaphors in the script are apparent, and apart from a monologue in the film’s final act that explicitly states them, bring a richness to the film’s winning story. Holland and Maisie prove a charming duo as they poke and prod one another before their inevitable (no pun intended) coming together. The Sea Beast gives you everything that these movies are supposed to, including a cute little monster who finds himself tagging along, providing comic relief and the occasional plot turn. More than anything, this strikes me as a film that could easily have been a massive box office success with even a perfunctory promotional budget. Maybe it doesn’t matter, and obviously Netflix measures their successes in different ways, but it’d be nice if a movie as good as this got more than just a one-week blip on the Netflix home page.