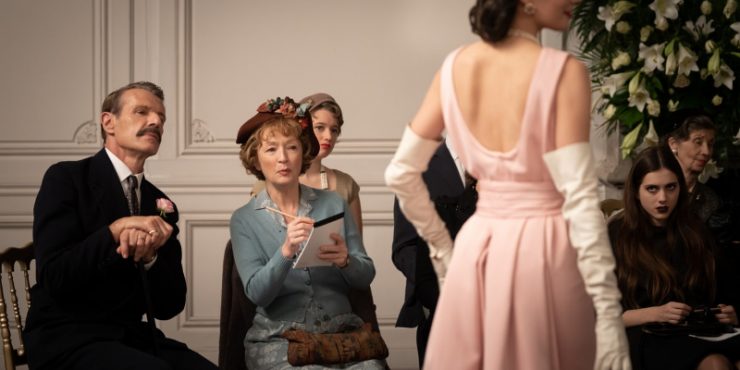 In Mrs. Harris Goes to Paris, Lesley Manville plays the titular Ada Harris, an English cleaning woman with an infectious, can-do spirit and the patented stiff upper lip. It’s a movie character we’ve seen before; a working class woman whose cultural naiveté belies a worldly wisdom. Played with equal parts daft adventure and earnest melancholy, Manville uses the familiarity of Mrs. Harris to her advantage. Suspense is hard to come by in this feel-good comedy, taking place in a bizarro world where kindness and consideration is everywhere you look, but Manville gives Mrs. Harris such a splendid “joie de vivre”. You likely know what you’re getting here, and it’s so wonderful when a film delivers on everything that’s promised.

Her trip to Paris is for a Dior dress. The year is 1957, when Dior was still exclusively a “haute couture” shop, where exclusivity and elegance made their dresses the height of luxury. When Ada spots a sparkling Dior dress in the bedroom of one of her clients, she becomes obsessed with getting one of her own. Alas, a Dior gown is a dream out of reach for a cleaning woman in London. Despite her frequent insistence on oncoming luck, her life is a prolonged sequence of misfortune. Struggling to get wages from upper class clients, and missing out on long shot bets at the dog track, things get worse when she learns that her husband, Eddie – whom she hasn’t seen since he went off to fight in World War II – has finally been confirmed dead. Against the odds, Ada had kept hope that he would return, but those hopes are now dashed.

From the tragedy of Eddie’s death, though, comes opportunity, in the form of a backlog of unpaid war widow’s pension. The amount is enough to fund her trip to Paris and to purchase her beloved Dior dress. With encouragement from her friend, Vi (Ellen Thomas), and the town rapscallion, Archie (Jason Isaacs), Ada flies out to Paris, suitcase in tow, and walks directly to the city center from the airport. Approaching the Dior building, Ada serendipitously enters during the opening of a new season. Her modest attire contradicts the lavish style of Dior, causing Madame Colbert (Isabelle Huppert) to quickly ask her to leave. After vehemently protesting and proving she has the funds to buy the dress (in a scene that recalls Pretty Woman), Ada’s spirit wins over the Marquis de Chassagne (Lambert Wilson), who invites the charming Mrs. Harris to attend the unveiling as his guest.

This is a motif throughout Mrs. Harris Goes to Paris, Ada’s absence of pretension and persistent good cheer disarms various members of the Parisian elite. This includes the Dior house accountant, André Fauvel (Lucas Bravo), and the leading model in Dior’s stable, the gorgeous Natasha (Alba Baptista). The only person unmoved by Ada’s affable geniality is Colbert, who sees the cleaning woman as a threat to Dior’s prestige. Indeed, Mrs. Harris has a lot to say about class conflict and the struggle of labor. A trashman’s strike plays out in the background of the film’s main drama, and Ada’s precarious economic position is always a tension underneath her quest for the dress. The allusions to worker solidarity are not subtle, but director Anthony Fabian proves deft at fitting it into the story without awkwardness.

Ada’s stay in Paris gets prolonged as she returns to Dior for custom tailoring, and accrues more French friends in the process. A romance blooms between Natasha and Fauvel (bonding over a love of Jean-Paul Sartre, of all things), while Ada’s rivalry with Colbert ebbs and flows. A happy ending is kind of part of the deal with a movie like this, but the movie’s script (by Fabian with Carroll Cartwright, Keith Thompson, and Olivia Hetreed) is clever enough to deliver it with a layered satisfaction. Based on a beloved novel by Paul Gallico, which has been adapted a few times before, the writers balance numerous themes, supporting characters, and subplots. Mrs. Harris pays off on nearly everything without ever feeling over-stuffed, and all at under two hours!

The sentimentality gets laid on pretty thick, but Manville’s exquisite performance is enough to keep treacly melodrama at bay. Her Ada Harris is a wonderful creation, a captivating character fighting against a selflessness that comes easy to her in an effort to chase her dream. She is not a Walter Mitty-type, shrouding the darkness of her trauma behind extravagant imagination, but a practical woman who refuses to be defeated by the realities of her life. You may presume suspension of disbelief to accept several French aristocrats taking to Ada Harris so quickly and easily, but Manville brings a complexity to Ada’s sweetness. That you are just as enamored with her is why the movie works so well. Only recently did Manville get an Oscar nomination for Phantom Thread, another film about a haute couture house. That performance was steely and severe, as far from Mrs. Harris as you can get. The gap between the two is a testament to Manville’s range and brilliance.

I adored every second of this piece of nicecore comedy. In the Rise of Nice that’s come with recent hit television comedies, one can almost feel brutalized by the obligation to enjoy yourself. But Mrs. Harris‘s insistence on good feeling never feels contrived. Fabian’s directorial hand is not the film’s strong suit, but his handling of the angel food cake-light tone is impressive. While the stakes may seem low, your investment in Ada and the rest of the cast is high, and as the loose ends of each story gets a convenient end point, you never feel cheated. This is the epitome of what a mainstream comedy should be: brilliantly acted, beautifully crafted and executed, iconic set pieces, imbued with a moral messaging that both avoids controversy while stridently taking a stand. I was enwrapped from beginning to end, adoring its exuberance and character-level attention. Not to be missed for sure, and Manville gives one of the best performances of the year.