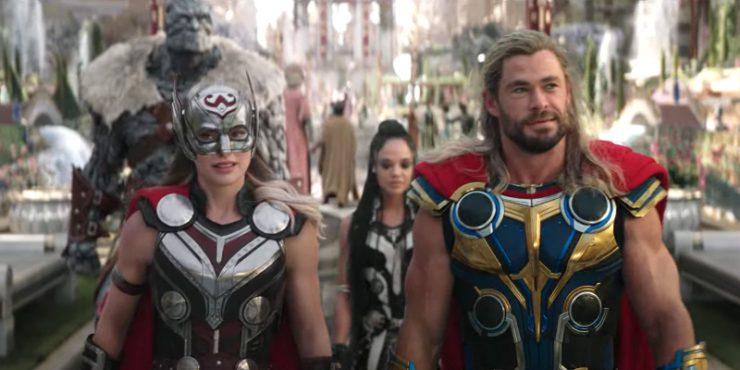 We’ve lost Iron Man, Captain America, and Black Widow (not to mention, The Incredible Hulk seems lost in an unidentified hiatus). Which leaves Thor, the last of the Phase One Avengers, and actor Chris Hemsworth, the only performer from the original crew still strapped into his Marvel contract, pumping out new stories while the rest of his peers are on to new projects. That’s perhaps why Thor’s films have had a more drastic tonal overhaul than any of the rest of them. The main cause of that is director Taika Waititi, the popular New Zealand filmmaker whose laughs-first comedic style brought a very fresh change-of-pace in Thor: Ragnarok. That film had a solid balance between Marvel’s stringent narrative structure and Waititi’s zany anarchy but the latest film, Love and Thunder, is fully unstable.

But you probably already knew that. Press screenings weeks before the film’s premiere have declared Love and Thunder as a complete disaster and, perhaps, the worst MCU film ever made. The movie’s narrative is sloppy, its direction is undisciplined, and worst of all, it’s not nearly as funny as it thinks it is. For me to say that it’s far from the worst Marvel movie I’ve ever seen will feel like damning with faint praise. I admire Waititi as a storyteller, and his first three films (Boy, What We Do In The Shadows, Hunt for the Wilderpeople) are unimpeachable; but his ascent into the mainstream has shown off his shortcomings as a visual storyteller, and has given him course to pursue his least interesting instincts as a filmmaker. This is the likely reason why audiences and critics alike seem poised to sharpen their knives against him.

Love and Thunder picks up with Thor, post-Endgame, where life with the Guardians of the Galaxy is constant battles against galactic gangs constantly threatening the innocent. Things become especially bad with the rise of Gorr (Christian Bale), a warrior turned God Butcher, who vows to kill all gods after nothing is done to save his daughter from starvation. With a powerful Necrosword, he vows to take down each god in the universe one by one. Thor soon after splits from the Guardians and returns to Asgard (now a popular tourist attraction named New Asgard) just as Gorr arrives. He fights off Gorr’s shadow monsters with help from Valkyrie (Tessa Thompson), and his ex-girlfriend, Jane Foster (Natalie Portman who, if nothing else, shows here that a great romantic comedy is just waiting for a performance from her).

Jane’s return is shocking to Thor, especially as she wields his old hammer, Mjolnir, and wears a costume very similar to Thor. Her heroic look hides a sobering truth: she is dying from Stage Four cancer and she hopes that wielding Mjolnir (and unlocking all of its mystical power) can somehow heal her illness. Thor and Jane have little time to discuss the romantic and existential ramifications of their reunion, as Gorr kidnaps all the children in New Asgard and traps them in the shadow realm, hoping to bait Thor into a trap. Thor, Valkyrie, and Jane decide saving the children is worth the risk, and after a detour in Omnipotence City (and a bizarre Greek-accented Russell Crowe as Zeus), venture toward the shadow realm, hoping to pull off the rescue without giving Gorr what he wants.

Where Ragnarok was wistfully injected with humor, Love and Thunder sinks into a deluge of Apatow-esque improv breaks that seldom inspire a chuckle if they don’t fall completely flat. There are moments when it seems like Waititi is following the path of a Zucker brothers-type parody of Marvel superheroes, but the film’s script (by Waititi and Jennifer Kaytin Robinson) is never clever enough to be deconstructive or brave enough to levy actual criticism. Where Sam Raimi found some success inserting his horror pastiche into Doctor Strange in the Multiverse of Madness, Waititi instead tries to make Love and Thunder a giggle fest, forcing round comic beats into a square superhero movie story. It’s a movie where you can tell everyone involved was having a good time while they were making it, but that never translates into a good movie.

I still have respect enough for Waititi to give his movies a fair shake, and there are a handful of jokes in this movie that land, but it’s few and far between. But perhaps Love and Thunder‘s worst transgression may be that it still expects us to buy into a third act filled with pathos after selling us a slap-happy comedy for the previous ninety minutes. Jojo Rabbit won Waititi an Oscar, but it’s a perfect example of his addiction to sentimentality – ahem, even if his protagonists are Nazis – which can sometimes dull the sharper edges of his comedy. But since Love and Thunder has no sharpness, the film’s maudlin third act feels like an albatross tied around an already agonizingly uninteresting movie. A Guns N’ Roses soundtrack provides some highlights, but even that mostly makes you wish you were sitting at home, listening to Appetite for Destruction, as opposed to sitting in a theater and watching this.