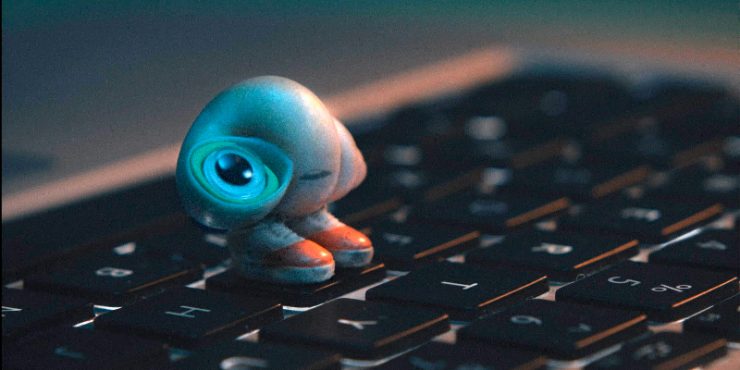 It seems pretty simple, at first. An anthropomorphized shell with a beady eye and a pair of pink shoes shares his unique experience of the world. His life is narrow to us, but to him it is enormously vast, and the canyon between those two realities gives opportunity for engaging humor and disabling charm. Marcel the Shell with Shoes On started as a three-minute YouTube video, which feels like the ceiling for so slight a concept. That director Dean Fleischer-Camp decided to extrapolate that into a feature film feels like folly, but he manages to pull it off. A large portion of the credit should go to Jenny Slate, the beloved comedic actress who helped Fleischer-Camp create the character and also voices Marcel.

Slate’s talent for voices and for comic timing are well known, but for someone unfamiliar with the YouTube videos (ahem, like me), her turn here is quite a surprise. A performer known mostly for manic chaos plays a minor key as the melancholy young shell living inside an AirBnb rental property. Like 2014’s Obvious Child (her best performance), Slate proves able to show a vulnerability without sacrificing her comedic edge, basically finding the perfect balancing act between that of a precocious child and her usual pyrotechnic persona. It’s one of the best things she’s ever done.

Marcel’s melancholy comes from the fact that he has lost almost his entire family. Before the carousel of renters, the house belonged to a tempestuous couple (Rosa Salazar, Thomas Mann) whose constant fighting would send Marcel and his fellow shells into the safe passage of the sock drawer. When one fight explodes into a break-up, Marcel’s family is swept up and thrown into a suitcase and wheeled away. The only one left is Marcel and his grandmother, Connie (a fantastic Isabella Rosellini), who live quietly in the periphery of the house as strangers come and go. That is, until the arrival of Dean (Fleischer-Camp plays a version of himself), who notices Marcel and decides to make a documentary about him.

As Dean films and questions Marcel, learning this history of loss and perseverance, he edits the videos together into a short montage that he posts on YouTube. Much to his surprise, the video becomes a viral sensation, with people all over falling in love with Marcel’s resourceful lifestyle and his precociously frank repartee with Dean. The video’s popularity even catches the attention of national news shows like 60 Minutes, Marcel’s favorite TV show. The newfound celebrity brings unwanted guests that threaten to disrupt Marcel’s peaceful existence with Connie, but it may also provide the resources needed to help Marcel find his long-lost family. The tension between these two facts is the central conflict, with Dean and Connie pushing Marcel to share his story with the world, and Marcel afraid that may expose him to more tragedy.

Trauma has become a popular thematic point with a lot of children’s entertainment lately, and while that certainly does play a role in Marcel the Shell, Slate and Fleischer-Camp smartly do not wallow too long on Marcel’s sadder aspects. Instead, the film’s patchy, episodic rhythm is sure to hit intentional comic beats within each segment, always subverting moments of drama with clever, humorous digs. There is a patience that Fleischer-Camp is showing here that’s very effective, knowing when to dwell on a moment and when to continue the movie’s deliberately choppy pace. He really does manage to make a feature-length story with the feel of a YouTube sketch, which feels so impressive.

Marcel the Shell has spawned several videos and books, so it is very much a known entity, beloved by many before the film was even made. Slate’s rendering of this character can slide from its youthful innocence into an ironic cattiness that is more common in Slate’s other work. On a larger scale, the film itself exists within a dead zone between being a quirky movie for children and a childish movie for adults (anyone who remembers 2010’s Where The Wild Things Are will know what I mean), but this won me over from the start. Perhaps having a fresh vantage point may have helped my appreciation. Marcel seems to me a character that can endure for a long time, living off the skill of Slate’s performance, charming audiences of numerous generations.