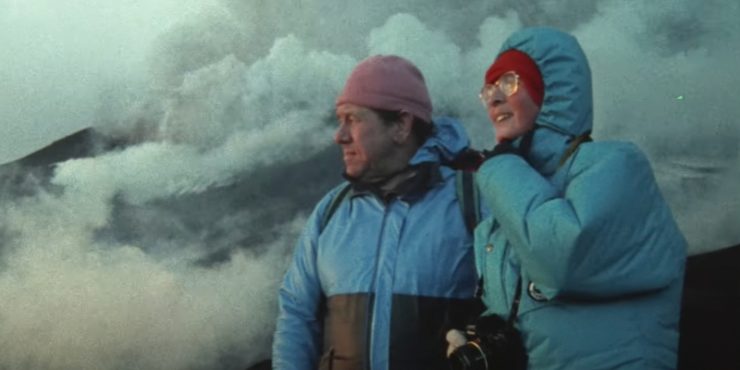 Fire of Love is a story about love within the ash of active volcanoes. The romance between our two main characters is volcanic in its passion, and the footage of the volcanoes is passionate in its romance. Everything you see in the new documentary was shot by Katia and Maurice Krafft, our two heroes and doomed lovers who court the danger of rupturing lava and bubbling acid. The Kraffts are volcanologists and they’re married, welding together their personal and professional lives, never separating their unending love for each other from their persistent pursuit of the next eruption. The tension within this bifurcated lifestyle is what drives the drama in director Sara Dosa’s film, which seeks to compare the wonder of the natural world with the strong bond between man and wife.

In their lifetime, the Kraffts were minor celebrities in their field. Their stunning footage, so tantalizingly close to lava flows, was a welcome sight on international television programs, where audiences watched in awe of the beauty of something so destructive. In front of cameras, Maurice often played the fearless pioneer, with stories of burned flesh and treacherous walks into the unknown. Katia played the glasses-wearing pragmatist, whose philosophical, detail-oriented focus on study gave their work a logical base. In reality, both were possessed by the same obsession, drawn away from the human world and pushed further into the realities of our earth. Humanity, they noticed, had vain, boring imperfections. The earth has excitement and spontaneity; an innocence that made them curious.

Dosa – also the film’s writer and producer – pens a wistful monologue (narrated thoughtfully by Miranda July) over the Krafft’s wondrous imagery. As a filmmaker herself, Dosa is fascinated by their skill with the camera, and Fire of Love does show off their talent for framing and zooming. Occasionally soundtracked with pop music, their shots may seem like something from Robert Altman or Wes Anderson. Their clips of eruptions and lava toggle between the hypnosis of a soothing, MacBook screensaver and the volatility of a violent explosion, shooting out pulpy chunks like a set piece from a John Carpenter film. After years of filming each journey, they developed a distinct cinematic style which pulsates throughout Fire of Love. One can imagine the endless reels of film that they shot, but Dosa expertly trims it all down into a ninety-three minute portrait of intimacy within nature.

Maurice and Katia are not religious people but their connection to these volcanoes is spiritual, and Dosa gets that across in their care and attention to how they film. Dosa also explores the destruction of volcanoes, highlighting eruptions in Columbia and Indonesia that change the Krafft’s viewpoint on their life’s mission. Maurice speaks of his dream of living in a world where volcanoes no longer kill, and Katia is passionate in predictive models and evacuation plans that can save lives. In the open of film, we learn they were killed by the volcanoes they so cherished, but Dosa then pulls us back and gives us the context to realize that their death is not a tragedy. They risked their lives to bring us knowledge and understanding of our living world, fulfilling their own need for observation at the same time as presenting it to the rest of the world.

This film is being released by National Geographic and there are times when I thought this may have been better as an hour-long television special, but Dosa does make her case for the cinematic qualities of Fire of Love. It’s framing of the Kraffts is not always as compelling as the volcanoes themselves, but the film always finds ways to astonish with its profound imagery, presenting the swirling patterns of smoke or the glowing texture of molten rock as it cascades down the mountain face (presented with great ASMR-level sound). There is a benefit to seeing this in a theater, becoming fully subsumed by the Kraffts’ engrossing picture show.