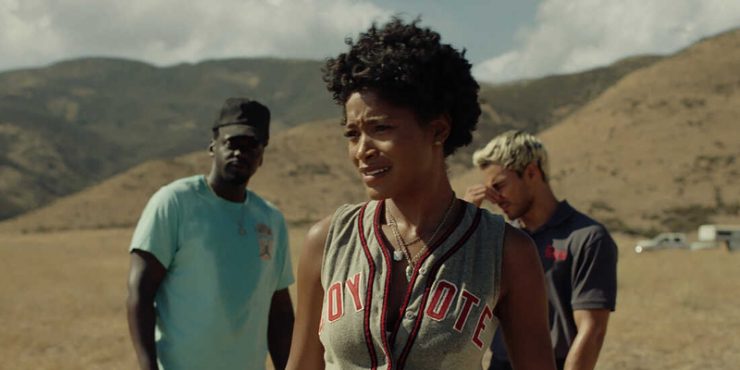 The evolution of Jordan Peele from the second most famous person in a beloved sketch comedy duo to Oscar-winning horror director happened in a flash. In his third film, Nope, Peele makes the leap from didactic psychological terror to full-blown blockbuster thriller. With his shrewd, economical visual eye and his narrative taste for social metaphor, Nope increases the scale and makes itself the very thing that it skewers: a spectacle. Like all classic mainstream films, Nope juggles incisive societal insight with broad commercial appeal, all while showcasing Peele’s unique cinematic palette. It’s a stunning balancing act that Peele pulls off because his understanding of his script – and how to visualize it – is so precise and complete. I was fully ensnared by every frame of this movie and I will be surprised if I see a better film this year.

With months of cryptic trailers, Nope did a remarkable job of mostly keeping you in the dark on what the film is actually about; a wise choice for a horror film, and an especially wise choice for a film as clever as this one. So, I’ll keep the plot details sparse. Our main characters are the siblings OJ (Daniel Kaluuya) and Em Haywood (Keke Palmer), the owners of the heralded Haywood Hollywood horse ranch in Northern LA. The ranch was run by their enterprising father, Otis (Keith David), whose death at the beginning of the film kicks off a string of very strange events. After a disastrous attempt to fill Otis’ shoes, OJ begrudgingly sells a handful of the horses in an effort to keep the ranch afloat. He sells them to Jupe (Steven Yeun), a former child actor turned amusement park owner whose Western-themed carnival (named Jupiter’s Claim) is just down the road.

OJ had been running the business with their father, and he has a commitment to the horses and the Haywood brand that Em can’t relate to. As a child, Otis discouraged Em from entering the industry, so now she has gone off to Hollywood to pursue her own career in the entertainment industry, independent of Haywood Horses. This divide creates a tension between the siblings, as OJ feels compelled to perform day-to-day ranch responsibilities, while Em prefers to use their film connections to promote herself. When Em decides to spend the night at the ranch house, they both see something strange in the sky that will change their lives forever. Is it a UFO? Obsessed with getting a clear image of it, they hire an electronics store technician named Angel Torres (Brandon Perea) to install cameras on the property. Catching wind of their plan – and having his own interest in extraterrestrial life – Angel requests to help them in their endeavors.

Peele’s script is contained, rarely taking place outside of the small stretch of scenic California mountain range that contains the Haywood ranch and Jupiter’s Claim, but it still manages to paint a vast canvas of fear and trauma within its limited setting. Character actor Michael Wincott (and his dragged-across-concrete growl) appears as a jaded cinematographer named Antlers Holst who may hold the key to getting visual proof of whatever it is that may be out there. There’s also a subplot involving Jupe’s childhood, and his part in a notorious television show called “Gordy’s Home” – a side story too good to reveal here, but one that transforms Yeun’s Jupe from a starched carnie into perhaps the film’s most complex character. Yeun’s screen time is limited, but he earns the legitimacy of his casting with the profundity he delivers in a short amount of time.

A Debord-ian deconstruction of “spectacle” is there to be had, though Nope makes a great case for the spectacle itself. This is perhaps the best Hollywood blockbuster since 2015’s Mad Max: Fury Road, though tonally Nope has much more in common with another Hollywood classic: Jaws. Both Nope and Jaws utilize classic horror movie tactics and weave them throughout a consistently funny, surprisingly touching story of a collection of people trying to go head-to-head with a terrifying phenomenon. Both films understand the limitations of human intervention while paying homage to the broad spectrum of human ingenuity. We’re rooting for our protagonists because they are so severely outmatched, but also because they are so beautifully, and particularly, sketched; charming and compelling, but also realistically fallible.

Nope‘s story is specifically a sibling drama about a brother and sister trying to overcome the death of their father while also contending with the complicated legacy he left behind. Haywood Hollywood Horses (as Em explains early in the film) descends from the unnamed horse rider in Eadweard Muybridge’s “Horse in Motion”, a six-second clip often credited as the first motion picture. It’s an effectively substantive claim, though it would probably be impossible to prove or disprove (which is maybe the point). The business was already in dire straights before Otis’ death, and now finds itself on its last legs. OJ’s dedication to tradition rubs against Em’s individualist pursuit, a perfect distillation of Peele’s old school/new school duality. Mixing a domestic storyline within the action is a specifically Spielberg-ian touch, but Peele makes his characters sufficiently distinct.

In a film that has several competing themes, the brother-sister dynamic was the most effective. That’s aided by the performances of Kaluuya and Palmer, whose greatness makes the movie run. Where Kaluuya continues defining his range as one of our best young actors, Keke Palmer shows herself to be a full-blown movie star. The two manage to have terrific chemistry despite playing at different tempos throughout the entire movie, Kaluuya’s stoic brooding playing perfectly against Palmer’s hilarious mania. As the film progresses, the payoff banks a lot on our emotional connection to their familial bond, a narrative stratagem that could crater a film less attune to its characters and the central focus of its plot. Nope gives you poignancy and manages to avoid sentimentality, and while Peele’s direction deserves all the credit in the world, Kaluuya and Palmer carry the dramatic weight and bring it home beautifully.

This already feels like it will be my favorite Jordan Peele movie, now and forever. Sweeping statements like that are foolish in general but the power of Nope is that it really feels like it earns it. I was tickled by the nostalgic throwbacks to blockbusters past, but was also fully blown away by Peele’s singular vision. His crafting of a UFO story is unlike anything else I’ve ever see, both visually and narratively. There are genuine laughs and seat-jumping thrills; a tribute to the grandeur of the movies on one hand, and a testament to Peele’s limitless storytelling talent on the other. After the shocking provocation of Get Out and the nightmarish metaphor of Us, we already knew that he was a fearless filmmaker. Nope gives him a much bigger budget, and it’s basically him showing off. Lucky for us that it produces something this good.

Written and Directed by Jordan Peele