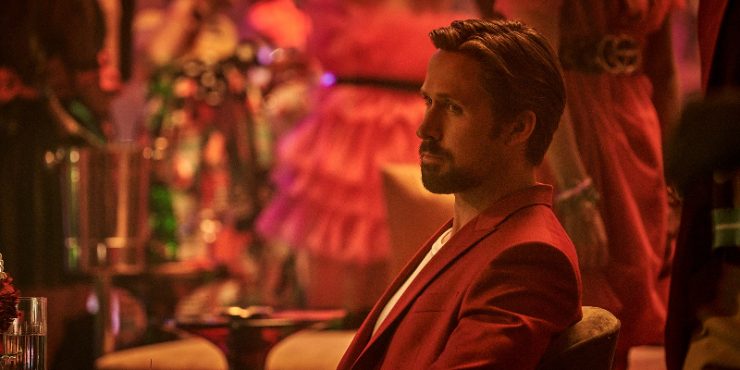 The Russo brothers have directed some of the highest grossing films in movie history. Their work within the MCU is the peak of populist cinema, kitchen sink ensembles with every superhero you can think of. Their unquestioned success should theoretically warrant the blank check status that they’ve acquired in Hollywood, but watching their movies you’d be hard pressed to find anything resembling a vision. (I mean this both figuratively and literally, their movies are often so poorly lit that seeing the face of one of the stars can feel like a luxury.) Their directorial stamp is less visual competency and more corporate fealty, a full-blown allegiance to studio notes and focus group suggestions. In their latest film, The Gray Man, they don’t have the benefit of familiar Marvel characters to juice up their dry toast approach to storytelling.

Our main star is Ryan Gosling, who hasn’t starred in a movie since Damien Chazelle’s First Man in 2018. Absence makes the heart grow fonder, for sure, but this is a particularly lackluster return. Gosling has the range to vacillate between the granite-faced cool of Drive and the self-deprecating humor of The Nice Guys, but The Grey Man asks him to be a wise-mouth government assassin named Sierra Six, a difficult task in general, but one that Gosling isn’t exactly fitted to. Films like Crazy, Stupid, Love and La La Land are perfect examples of Gosling’s paradox: despite how cool he looks on the outside, he’s actually a scrupulous neurotic on the inside. The irony is that the perfect actor for this kind of sugar-and-acid character is Robert Downey Jr., whose starpower and acting talent, I still contend, is the base of MCU’s house of cards.

Sierra Six was born Cameron Crovetti, and at the film’s open, he’s in prison serving a sentence for murder (don’t worry, the film makes pains to absolve all of his sins, past and present). He’s visited by Donald Fitzroy (Billy Bob Thornton), a CIA bigwig developing a crew of black ops soldiers to take out the real dirty trash, the stuff that even the CIA hopes will never get traced back to them. Already a murderer, Crovetti seems like a perfect candidate to kill on a large scale for the government, so his sentence is commuted and he’s turned into Sierra Six. The film then does a very generous cut eighteen years into the future, where Fitzroy has been exiled and the Sierra program is now being run by Denny Carmichael (an obnoxiously bad Regé-Jean Page), a trigger-happy suit who wants to dismantle the Sierra program.

Putting aside the eighteen-year jump that presumably and conveniently skips over a litany of international atrocities that Six and the Sierra team has probably executed in the name of American empire, The Gray Man‘s basic premise of Carmichael’s death squad rubbing against the ethical code of Fitzroy’s death squad is a perfect distillation of this film’s warped moralities, playing government murder and worldwide destabilization like it’s Call of Duty. It doesn’t take long for Six to realize that Carmichael is compromised, and when he gets his hands on a jump drive with information that proves it, he becomes the CIA’s no. 1 target. This is introduces us to Lloyd Hansen (Chris Evans), Carmichael’s notorious bagman whose toxic, sadist reputation prevents him from being formally associated with even the Sierra program. Carmichael is not squeamish, and he brings on the ruthless Hansen to find Six and acquire the asset.

You get the sense that Evans – decked out in tight-fitting collared shirts and a precise mustache – is playing Lloyd Hansen exactly as asked by the Russos. He is, unfortunately, still very bad as this didactic villain who spends half the time telling members of the CIA how bad he is because he doesn’t follow their rules. Hansen is yet another layer that The Grey Man deploys to differentiate between good and bad killing, and he is set up to be the ultimate face of evil against Six, whose murders are government-sanctioned. When Evans isn’t tasked with screaming about his villainous resume, he’s supplied with painfully unfunny quips, made more painful with anyone familiar with Evans’ actual talent with comedic timing. Given the choice between Gosling’s personality-less hero and Evans’ overwrought baddie, one wishes for a mercifully short runtime, which the movie doesn’t have.

The cat-and-mouse game between Six and Hansen takes place over several world capitals and ends up including numerous supporting characters, including Dani Miranda (Ana de Armas), a fellow black op who partners with Six when she realizes Carmichael is not above board. De Armas is being aggressivle prepped for movie stardom, but this may be the most thankless role she’s gotten so far, and one that totally throws away her magnetic screen presence. Alfre Woodard shows up for a couple of scenes as Margaret Cahill, another CIA higher-up and Fitzroy disciple who gives Six some much-needed cover. Jessica Henwick is Suzanne Brewer, a character whose sole instruction is to remind the audience once again that – regardless of the fact that the CIA’s taste for murder knows no bounds – Hansen is a particularly bad man who stretches the boundaries of what’s acceptable.

Julia Butters plays Claire, Fitzroy’s young niece who he takes in when she’s orphaned. Claire is kidnapped by Hansen to leverage Fitzroy into providing information about Six’s whereabouts. She also has a heart condition that requires a pacemaker. A short flashback reveals how the precocious, sarcastic Claire and the dutiful Six came to be close. On paper, this seems like the most exhausting subplot of the film, but thanks to Butters’ committed performance, it turns out to be the film’s sole bright spot. She is the only character that Six has any legitimate chemistry with, and will remind some of Gosling’s performance in the criminally underrated The Nice Guys. Last seen in Tarantino’s Once Upon a Time in… Hollywood, where she also enjoyed great chemistry with a major movie star (Leonardo DiCaprio), Butters is proving to be an enduring young talent.

I’ll freely admit to having a bad faith toward the Russo brothers. Their fire-and-brimstone media campaigns filled with conservative talking points – declaring everything from Martin Scorsese to watching movies in movie theaters as “elitist” – makes me predisposed to dislike any film they might put out. But it still feels correct to declare The Gray Man a disastrously bad movie. Their depraved politics aside, it’s actually insane that directors as popular as the Russos could be so inept at making movies. I’m used to CGI-heavy films looking terrible, but The Gray Man has little excuse to be as poorly lit or as asininely framed and blocked as it is. The editing has no concept of time and space, cutting across scenes in ways that feels desperate to keep a tidy runtime instead of producing the natural flow of a story. It’s embarrassingly shoddy filmmaking, and I had as much fun watching it as Gosling appeared to have starring in it.