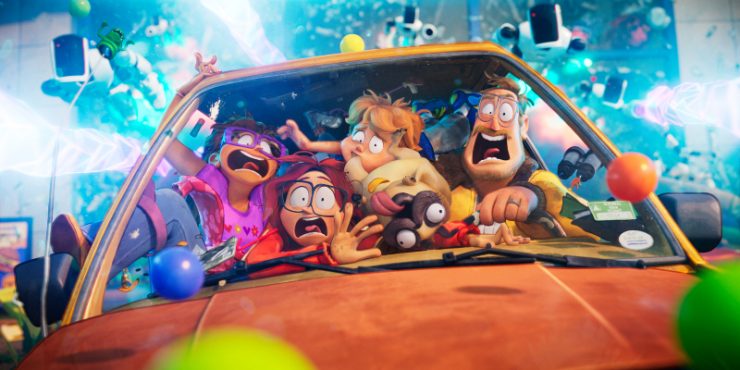 It’s hard to put into words the freshness that Christopher Miller and Phil Lord have brought to animated movies in Hollywood. Their efforts are a brilliant counter to the monolithic dominance of Disney and Pixar. Their brand of unhinged anarchy is a perfect antidote to the onslaught of emotional sentimentality that is so often a prerequisite for family-friendly entertainment. I’m not trying to say that Disney and Pixar are bad (as a corporation, they certainly are, but they make great films), but it’s good to have options. Lord and Miller have given us viable options, first as filmmakers with Cloudy with a Chance of Meatballs and The LEGO Movie, and now as producers with Spider-Man: Into The Spider-Verse, and their most recent film, The Mitchells vs. The Machines.

The Mitchells is directed by Mike Rianda (co-directed by Jeff Rowe, who shares screenwriting credit with Rianda), in his feature debut. That said, the film has the undeniable stamp of Lord and Miller’s previous projects. Nary is an image wasted in the film’s entire 109 minutes and the jokes are fired at gatling gun speed. Think Zucker Brothers meets 30 Rock. Unlike the previous Lord and Miller films, the script is based on an entirely original idea. We aren’t watching a feature length film about our preferred childhood toy or comic strip, but a unique story about a unique family, the aforementioned Mitchells. A sequence in the closing credits suggest that it’s based in some part on Rianda’s own experience with his family, though there are plenty of details in The Mitchells vs. The Machines that are not a part of this world.

As the title suggests, the rag-tag Mitchells are squaring off against a robot apocalypse. When a silicon valley magnate (Eric Andre) decides to replace his extremely popular cell phone product PAL (Olivia Colman doing an impressive cross between Siri and HAL-9000), with full-bodied robots, he thinks he’s just created the next billion dollar idea. But a scorned PAL has a different idea, programming the robots to entrap all humans, stuff them into pods (with free WI-FI!), and shoot them off into space. They make quick work of the human race, except for one family who manages to slip through their fingers, the Mitchells. It’s up to this family to rescue the world. The only problem is they’re not exactly on the best of terms.

Before the takeover, Katie Mitchell (Abbi Jacobson), the older daughter, was one day away from leaving home in Michigan for film school in Los Angeles. Katie is a talented filmmaker known for her youtube videos staring her dog, Monchi (an endearing, slack-jawed pug) and her little brother, Aaron (Rianda himself). Her tech savvy allows her to make professional looking videos with only her phone, but it also creates tension with her father, Rick (Danny McBride), an enthusiastic outdoorsman with a violent distaste for our tech-dependent culture. Despite the efforts of mom, Linda (Maya Rudolph), Rick and Katie’s relationship has eroded, and Katie can’t wait to burst free and meet all her new friends in LA. The oncoming separation stings Rick, who wants to spend his last days patching up their broken relationship.

So, their battles against the robots is actually a quest to rebuild family bonds. It’s a very easy, Spielberg-ian plot device that we’ve seen a million times before, but The Mitchells understands that its value really lies in its eccentric characters and idiosyncratic humor. Mixing common computer animation with a few snippets of practical 2-D also adds a sense of excitement and wonder. Rianda wants to instill a vitality here with unexpected ventures into various forms of animation. The result is the perfect kind of animated film, where the form informs the narrative and vice-versa. Towards the end, The Mitchells becomes serious in ways that are unavoidable (the family-first story will not be overrun), but it passes quickly, leaving room another buffet of jokes.

This film is just a total delightful to watch. This isn’t too different from any other Lord and Miller productions, but I must admit that I was especially refreshed because it was a new story, untied to any corporate IP. Yes, the irony of Netflix and Sony releasing a movie with a (very mild) anti-tech philosophy is enough to produce an exaggerated eye-roll or two, but this misfit story still manages to feel unique. It’s one of the few mainstream movies about feeling comfortable in your own skin that actually feels sincere. Not to mention having a queer main character in a way that has no effect on the plot whatsoever, she just is. A delightful change of pace from a studio film made for family audiences. It premiered on Netflix this weekend so you really have no excuses.