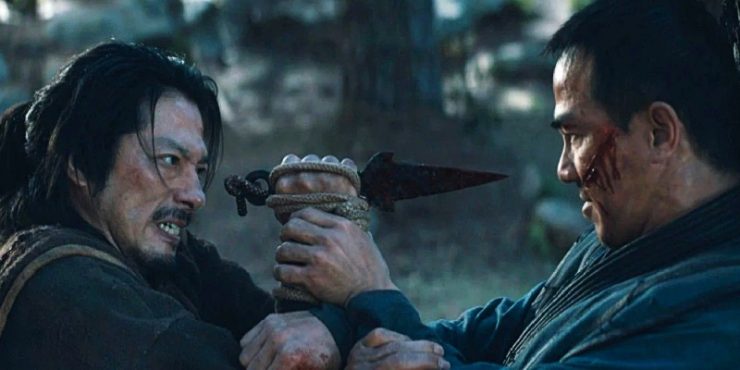 We are living through the Tyranny of Origin Story. Back in the simpler, dumber year of 1995, the film version of Mortal Kombat was content in its ludicrousness, with bits of exposition treated as necessary evils to propel you toward fights between Johnny Cage and Scorpion, Sonya Blade and Kano, Liu Kang and Shang Tsung. I’ll admit that Marvel’s monolithic enterprise of superhero films have developed a sort of mastery of these narratives, building a formula to prop up a movie character’s origins while crafting a compelling story around it. The problem is everyone else trying to match that formula. This new Mortal Kombat is not for children. It’s a hard R, with gory violence and a litany of unnecessary f-bombs. It’s not necessarily a movie for adults either. This is for adults wishing they were still children. Hardly an original idea but it’s difficult to find a movie that does it as transparently as this one.

In the twenty-six years between the first Mortal Kombat and this one, it’s obvious that storylines and character arcs have sharpened and gotten more sophisticated. There’s an element of fan service now that was less pressurized in the 90s. Studios are also more cognizant in their casting. No more French-American Christopher Lambert as Japanese thunder god Raiden. So in 2021, we get a Mortal Kombat layered with more logic and more explanation. What these movies never consider is that explaining the genesis of a man who shoots ice bombs from his palms only makes it more nonsensical. A story is supposed to guide us toward the man with the giant robot arms, but it doesn’t always have to give an itemized description of how we got there.

Perhaps more nonsense is the point. When this new Mortal Kombat does take a break from its world-building, it does appear to have a decent sense of what it wants to be. In a surprising move, the film chooses the point of view of Cole Young (Lewis Tan), a newly invented character, not from any of the video games. Cole is a mediocre mixed martial artist, making money as a tomato can, getting beat by up and comers every fight. A prologue at the beginning of the film explains that Cole is a descendent of Hanzo Hisashi (Hiroyuki Sanada), a 17th century Japanese warrior. When Hanzo was killed by Bi-Han (Joe Taslim), his bloodline was thought to have ended, but it has passed along for centuries ending with Cole. Cole is totally unaware of his lineage until he and his family are themselves attacked by Bi-Han, now Sub-Zero, in another attempt to kill off the Hisashi bloodline.

With the help of Jax (Mehcad Brooks) and later Sonya Blade (Jessica McNamee), Cole escapes Sub-Zero and learns of his connection to Hisashi and the Mortal Kombat tournament. As in the 1995 film, the outworld ruled by Shang Tsung (Chin Han) is one tournament victory away from overtaking Earth. It is up to a select few humans to fight off world destruction. Sonya and Cole are joined by Kano (Josh Lawson), a loud-mouthed Australian mercenary under Sonya’s capture. The three find Raiden’s layer where they also meet Liu Kang (Ludi Lin) and Kung Lao (Max Huang), and prepare to fight in Mortal Kombat. There’s a lot more about a chosen few with a dragon mark, which gives these “mortals” a super power which they must search their souls to find (???), but that’s really besides the point.

**Spoiler Alert** Perhaps the biggest narrative oddity of Mortal Kombat is that the tournament itself never occurs, but the plot is in fact about Shang Tsung’s effort to cheat the system and kill off the human champions before it even begins. This of course sets up for the tournament itself in future movies. Like all franchise films, there is always a carrot at the end to keep you coming back for more, as Hollywood continues to cannibalize itself in order to be more like television. This was the case in 1995 as well, when the first Mortal Kombat movie ended with a commercial for the sequel. There are few sins in director Scott McQuoid’s reboot that haven’t already been committed in the original film. But totally bypassing the title event is truly a bold narrative technique. Or maybe it’s just stupid.

This film delivers on a number of things many are expecting. Exciting fight choreography, gruesome kills, horrific acting, to name a few. Despite it’s obsession with an Avengers-esque superheroes-come-together story, it’s still essentially a low-brow martial arts film with a torrent of fantasy elements. Jax gets his robot arms after Sub-Zero blows off his real ones, and Hanzo Hisashi rises form the depths of Hell to become Scorpion. (Yes, we do get a “Come over here!”, as well as a “Fatality!” and a “Flawless Victory!”, perhaps the best and most vapid trio of catchphrases ever produced.) Cole morphs into his own yet-to-be-named character (‘Gold Chest’ is my suggestion), and the wheels begin rolling on a new franchise. I get the sense that fans of the video game will be pleased. Fans of the more insipid action films of the 90s? Maybe not so much.