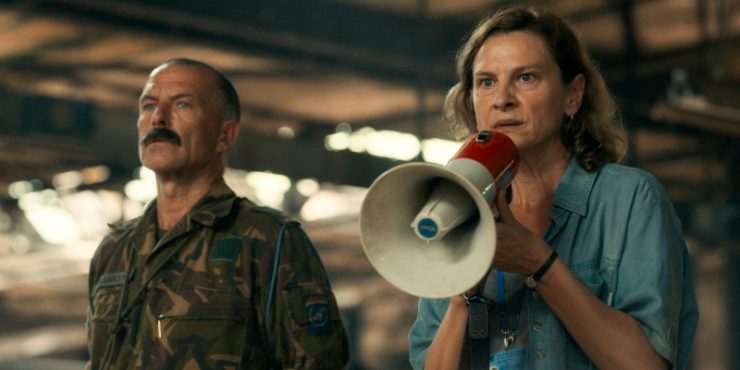 In one of the few calm moments from Quo Vadis, Aida?, our title character (played with perfection by Jasna Đuričić) is sitting with a doctor smoking a cigarette. They’ve just delivered a baby in a run-down UN Camp in the Bosnian city of Srebrenica. Neither are midwifes with any experience in delivery, but they pulled it off against the odds. This is just one of the many high-stress tasks they’ve had to perform during the Serbian takeover in the Summer of 1995. The doctor asks Aida what she did before the war with the Serbs, and she replies that she was a schoolteacher. She describes her former life with warmth, placing herself back in her quaint pre-war life. Before this moment, we’ve seen Aida witness inhuman acts of violence and intimidation. It’s this quiet scene, near the halfway mark of the movie, that really hammers home the toll excised on civilians throughout this devastating war, by focusing on what they’ve lost.

The film begins on July 11th, 1995. The Serbian army, led by the charming but ruthless Ratko Mladić (Boris Isaković), has burrowed into Srebrenica despite specific orders against it from the United Nations. The UN had given Mladić an ultimatum: if you invade, there will be airstrikes. Aida, and her fellow Bosnians, are not surprised when the UN finds themselves totally neutered when Mladić disregards their order. Aida is a Srebrenica resident, with her husband Nihad (Izudin Bajrovic), and her two sons (Boris Ler and Dino Bajrovic). She is also a translator for the UN, and often finds herself an unwilling arbiter within tense conversations between worried Bosnian officials and obstinate UN commanders who do not speak the language. When Mladić breaks the ultimatum, those same UN commanders prove quite impotent.

What follows is a ticking clock thriller in which Aida attempts to rescue Nihad and her sons from certain extermination at the hands of the Serbian forces. Desperate, she blows past protocols and tries to leverage her position to get them special treatment. Meanwhile, Mladić begins bussing citizens both within and outside of the camp to “safety”, a pledge that sparks deathly fear in the unhoused refugees. At first, Mladić does this against the orders of UN Colonel Thom Karremans (Johan Heldenbergh) and Major Rob Franken (Raymond Thiry), but with some swift and aggressive bullying, he is quickly accomplishing his goal with their aid. Aida becomes ensnared, forced to voice the policies that will send her fellow Bosnians to certain doom, all while doing everything in her power to keep Nihad and the boys out of harm’s way.

This film is a masterpiece of tension, and a document of colossal failure in world power. Left without resources or support from the outside, Aida and the UN camp are forced into dehumanizing betrayals, making handshake deals with a sadistic armed force that cares little for the civilians. Even Aida, our heroine, forsakes the safety of many in hopes of protecting her family, and she keeps running into walls on both sides. The UN won’t protect them because they must follow the rules and not make exceptions; and the Serbs won’t protect them because they don’t live by any rules. In the face of military force, our system for protecting the vulnerable comes completely undone.

At the beginning, a card tells us that the following film is a dramatized version of actual events. Perhaps it might seem redundant, but a statement of fact for the events seems necessary. Or else, could we believe that such things could be possible, that altruism can be so quickly thwarted by power? In Srebrenica, the people are constantly told by the UN that they should expect mercy from the victorious Mladić. It’s unclear how much even they believe it. There comes a point in Quo Vadis, Aida? where even they understand the depths to which they’ve been bowled over. As they send the people they’d sworn to protect to slaughter, the weight of their ineptness weighs heavy. Buckling in the face of injustice feels almost as harrowing as Mladić’s horrific plan.

Writer-director Jasmina Žbanić shoots and cuts Quo Vadis, Aida? with stunning immediacy (cinematographer: Christine A. Maier; editor: Jarosław Kamiński), recalling the dramas Son of Saul and Come and See for the stark but pulsating tone and ferocious momentum. This is not an easy film to sit through. The starkness of the evil matches the killers seen in the landmark documentary The Act of Killing, where there aren’t questions of right and wrong, but only strong and weak. Led by the brilliance of actress Jasna Đuričić (the film places Đuričić in constant duress, a lifetime’s worth of duress, and she brilliantly portrays the frantic desperation with taut perfection) Žbanić recreates a real-life horror show. The film is a testament to emotional strength but also an argument against its usefulness in a truly dire situation.

Written and Directed by Jasmina Žbanić