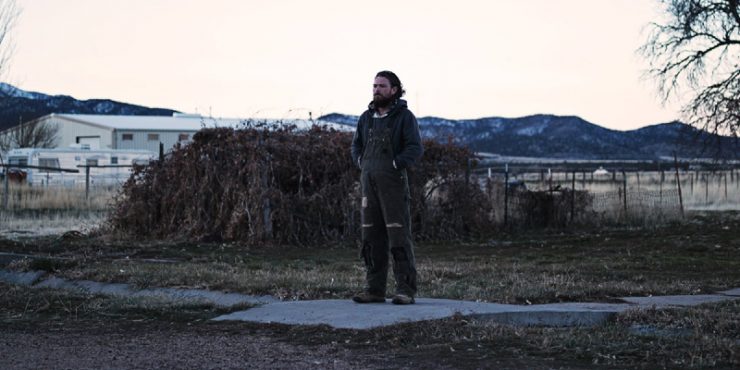 David is a man down bad. Played by Clayne Crawford, he’s an overall-wearing day laborer with long, greasy hair and a crumbling marriage. He puts on a good face for neighbors and friends and even his family, but in more honest moments, he harbors deep resentments and anger, with fantasies of troubling, tragic violence. In the middle of a dreary, nowhere town in Utah, David stumbles around, in constant grief over the state of his family. The agreement was that he and his wife, Nikki (Sepideh Moafi), would try a separation. She would live in their house with their four kids (a teenaged daughter and a three rambunctious boys), and he would live down the street with his father (Bruce Graham). They can see other people if they choose, but they would still be committed to trying to make their marriage work.

The situation is already a volatile one but things really spill over when Nikki starts sleeping with Derek (Chris Coy), a gregarious interloper who seems to have no issues taking advantage of a vulnerable situation. Already intense to an uncomfortable degree, David goes from furious to blatantly homicidal, carrying a pistol with an intention that he just barely suppresses. Their oldest daughter, Jess (Avery Pizzuto) is furious at her mom for being with Derek, but she takes it out on David for not fighting back. Jess wishes that her dad would force his way back into the family, fully unaware of his truly disturbing ideas. Shooting the film in the claustrophobic 4:3 “square” aspect ratio, writer/director/editor Robert Machoian documents a truly combustable situation.

This is some weighty stuff, and narratively, The Killing of Two Lovers sometimes buckles under the amount of misery Machoian keeps piling on. But there is a mastery of tone throughout, with individual scenes comfortably shifting between stunning despair and comfy, lived-in humor (the dialogue, precise and realist, has some surprising laugh lines). Visually, Machoian and cinematographer Oscar Ignacio Jimenez contrast wide landscape shots with excruciating close-ups. The clash between the two techniques – as well as an odd tinkering with focus – gives the film an almost surreal quality, imbuing everyday conversations with the dread of a horror film. This is aided by a film score that is composed mostly of everyday sound effects blended together into a terrifying cacophony of suspense. (If anyone has any legitimate information on who produced this score, I’d love to know.)

The tight, isolated story (truncated by an obviously limited budget) reminded me of Jeremy Saulnier’s 2013 film Blue Ruin which is another extra-small indie that created horror tension within very low-concept plotting. Also like Blue Ruin, The Killing of Two Lovers is led by strong performances, especially from Clayne Crawford, who manages to make David more than just another Joker origin story. The film forces us into David’s singular point-of-view. We have close to no information on his role in the split with Nikki (though a bad temper is evident) and he comes off as a clear victim in their separation. It’s Crawford who fills the hangdog character with a real danger. We never really know the level of threat that David brings, but Crawford makes sure to let us know that his brooding can lead to some scary stuff.

On a personal note, this is the first movie I watched in a movie theater in close to fifteen months. The first film since Ben Affleck’s The Way Back, another movie about a lumbering depressed man. Being back in the dark enclave of the Quad Cinema in Greenwich Village made Machoian’s film really pop. The 4:3 ratio (quickly becoming a shorthand for indies trying to create tension) pops on the big screen in a way that it simply would not have on my home television screen. It feels good to be back at the movies, and I’m ready to get fully back into the habit.