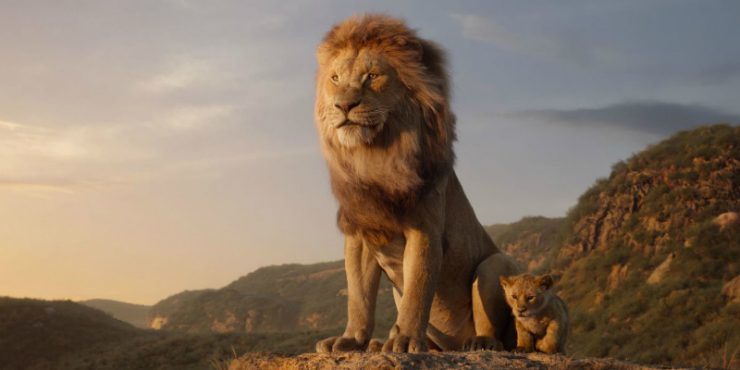 I don’t think the existence of this “live action” (“live CGI”?) version of The Lion King means that Disney thinks it has improved upon the original 1994 film. That movie is one of Disney’s definitive masterpieces, a piece of cinematic iconography that impresses still to this day. Much like Toy Story 4 from a month before, this new Lion King makes no grand arguments for its own significance (even though its promotion had much more bluster), and any measurement of importance is tied directly to the original. It’s both a remake and homage – as if it’s tapping you on the shoulder to modestly ask “Is this really the version you want to be seeing?” So, why make it? That question can only bring cynical answers, and ignores that this new Lion King is earnest and respectful enough to actually be good.

Out of this new wave of Disney remakes – a macabre array of live action imaginings that feel so insulting to such a studio’s rich history – this is the first one I’ve seen. It helps that the film is still essentially an animated feature, even if it’s hardly a “cartoon”. This new Lion King doesn’t seem to regard “cartoon” as a dirty word, but there’s little to be seen of it here. The attention to detail in the animals is quite the feat, even if the quest for anatomical authenticity falls apart when the animals, you know, speak and sing. It’s directed by Jon Favreau, the ultra-average-but-ultra-dependable actor turned ultra-average-but-ultra-dependable director. What Favreau lacks in style, he usually brings in professionalism. His best asset is that his movies usually don’t suck.

And The Lion King doesn’t suck. It’s script (written by Jeff Nathanson) is nearly identical to its predecessor, though there are slight shifts here and there. The ideal that the animation is striving for means that the narrative must account for animals’ inability to emote. And so, the subtleties of the dialogue fade away, and the specific charms within the personalities of characters like Simba and Scar are mostly pushed aside. Hans Zimmer’s swelling score (mostly intact from 1994) helps, but nothing helps more than a familiarity with the story, in order to get the richest emotional payoff. Disney seems to think that this modern animation style will add grandeur, which ignores that there were few things grander than The Lion King‘s original screenplay, which was equal parts biblical (Cain and Abel) and Shakespearean (Hamlet).

The vocal cast gets updated – with the exception of James Earl Jones, who reprises his role as Mufasa, which proves that there are some things that even Disney thinks should not be updated – which gives the movie a glimmer of starpower. Donald Glover is a bit sleepy as adult Simba (I’d make the same criticism of Matthew Broderick’s vocal work in ’94), and Beyoncé’s adult Nala is expanded upon to meet the caliber of her celebrity. John Oliver as Zazu, and Billy Eichner and Seth Rogen as Timon and Pumbaa, are inspired choices which payoff on the movie’s goal to admire the first film’s rich humor while still being unique in their fresh takes. The hyenas (voiced by Florence Kasumba, Keegan-Michael Key and Eric André) are given a little bit more nobility and nuance in this version – they have their own tribe, more than simply Scar’s hired guns.

Which brings us to Scar, arguably the film’s most important character. Chiwetel Ejiofor, one of the more sturdy veteran film actors we have, is given the unenviable position of taking the part so immortally portrayed by Jeremy Irons. Ejiofor is perfectly capable of hamming it up, but what Irons was doing was pure camp, the kind of dastardly portrayal that only a stupendously vain actor like Irons can pull off. The villainy of Irons’ Scar was so over-the-top that even Nazi imagery wasn’t beyond the pale. This is by far the biggest drop-off in the recreation, and I say that without thinking that Ejiofor does a bad job. The limits of making Scar look like an actual lion puts a cap on how far the character can actually go, and what we’re left with is a rather drab villain comparatively.

By now, you can see how much trouble I have talking about this film without always referencing the first one. This Lion King gives you little options otherwise. Its esteem for the ’94 film is deep within its marrow. There certainly is a gatekeeping aspect to my feelings. The Lion King is a product from my childhood that I feel needs no makeover, and like all great films, its significance has grown as I have grown. The impact of Simba’s maturation, of Mufasa’s demise, of Scar’s horrid manipulations, have all grown with each subsequent viewing. It’s almost hurtful to me that anyone would suggest that it should be tinkered with. So maybe I don’t have the stomach for today’s cinematic climate, which seems to look at anything that has gone well before and reply, “Well, let’s do it again.”