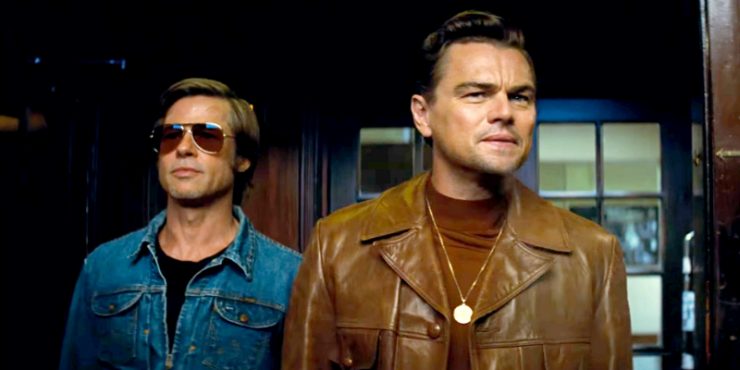 Quentin Tarantino is now part of the Hollywood elite that he used to fantasize about. The very films and filmmakers that he used to skewer and homage are now his peers, even the dead ones. He is also part of a dying breed: he’s one of the last directors that a Hollywood studio will give unlimited resources without interference. He’s someone whose vision is trusted, even when his discipline isn’t. There’s still a sheen associated with being part of a Tarantino film. So it’s fascinating that this Loa Angeles problem child would take that trust, that investment, and return with Once Upon a Time… in Hollywood, a film obsessed with digging up Tinseltown’s gravest skeletons and parading them for a 2019 audience.

Tarantino’s debts to previous Golden Ages of Cinema are legion, and part of his charm is that he’s never really grown out of his reductive filmmaking style. His tastes are too varied – from classic austerity to shameless B pictures – to leave anybody out. His last two films, Django Unchained and The Hateful Eight, were a bit ponderous, and Eight especially mistook a lot of dialogue for good dialogue. Those films were also blood-soaked reconstructions of history meant to disorient audiences about the true realities between blacks and whites in the Wild West. Inglourious Basterds (the film directly before those two) did the same thing, except he did it with the Jews and Nazis during World War II. All three movies rejoice in their bloodlust.

Once Upon a Time has less interest in being a high moral arbiter, and it doesn’t try to conjure slick revenges over history’s greatest injustices. Instead, its focus is on Los Angeles in 1969, that fateful year where free love and and psychedelia fell under the horrid tragedy of Altamont and the Manson murders. Manson and his family play a part in this film, though mostly as background to the stories of actor Rick Dalton (Leonardo DiCaprio) and his best friend/bodyguard/stunt double Cliff Booth (Brad Pitt). Dalton was a television star in the 50’s, which gave him the capital to own a beautiful home on Cielo Drive, but after the show ends and his attempt at movie stardom falter, he’s looking career stagnation right in the face.

Bitten hard by alcoholism and insecurity, Rick is perpetually paranoid about his place in the show business ladder, and when he’ll fall off of it. His only true ally is Cliff, who when he’s not performing Rick’s stunts, is playing his chauffeur and handyman, not above climbing on a roof to look at the TV antenna. Cliff has his own morbid past within the industry, though that’s not worth getting into here. You can see it plainly, though, when you see how differently Cliff drives when Rick is not in the car. These two men, and their unspoken, inseparable pact, keep each other afloat within a city run by greed and perversion. Both have the stomach for the seedy side of Hollywood, but does Hollywood have the stomach for them?

Rick’s new next door neighbor is Roman Polanski (Rafal Zawierucha) and his new wife Sharon Tate (Margot Robbie). Polanski is hardly home though, and Sharon spends most of the time with her friend and former lover, Jay Sebring (Emile Hirsch). We all know what has happened to Sharon Tate and Jay Sebring, that they were mercilessly slaughtered by a trio of sycophants at the behest of Charles Manson. Tate’s presence (and Robbie’s performance of her) is a spry display of star-dazzled innocence, and our knowledge of her fate hangs heavily over even her most appealing scenes. We also have a taste for Tarantino’s subversive nature, and Once Upon a Time trains us to learn not to trust anything that comes out of Hollywood, not even the very movie you’re watching.

Meanwhile, Rick dreams of possible run-ins with the esteemed Polanski (in 1969, he is still eight years from drugging and forcibly sodomizing a 13-year-old Samantha Gailey), a chance meeting that can make his film career blossom. Instead, he is taking black hat villain parts in pulpy television westerns. On set, he is cursed by a nervous stutter and an inability to remember his lines. His confidence comes and goes like the wind, and what’s worse, Cliff is not allowed on the set – his reputation precedes him, and the producers don’t want him around. It takes a precocious 8-year-old co-star (Julia Butters) to knock him out of his funk.

It’s hard to ignore the disparity between Rick and Cliff. While Rick’s fragility buckles often under the pressure of maintaining stardom, Cliff’s attitude toward being blackballed from the business is met with sputtering indifference. Cliff’s only loyalty appears fixed to Rick (though he does appear to love his pet pitbull, Brandy), while all his other troubles tend to float by the wayside. Cliff has his own incidental run-ins with Manson’s family – the actual Manson (played by Damon Herriman) is more specter than character – including with a hitchhiker named Pussycat (Margaret Qualley) who is just sure Charlie will dig Cliff. Like many non-Rick aspects of Cliff’s life, that goes awry and it sets the stage for Tarantino’s perspective on the Manson murders.

You may recall, amongst the uproar of the Weinstein reckoning, that Tarantino admitted to knowing plenty and doing nothing. To follow that by making a film like this – a film, in part, about a crime that encapsulates Hollywood’s compliance with harrowing violence against women – is bold even for him. When you’re about 125 minutes into the 161 minute Once Upon a Time… in Hollywood, you may find yourself considering how not violent the film is, compared to the rest of his canon. That changes quickly in the film’s final act, which is shocking, and meant to be. Its ending will seem cruel and horrifying, but those who criticize will also be forced to reconcile with history. Is Tarantino’s version of things that much more objectionable than the real thing? Perhaps it is, but it’s also a conversation worth having.

There is so much to talk about here. For one, this may actually be DiCaprio’s first actual risk as an actor, as he plays the thing that appears to be his worst nightmare: a forgotten has-been. Likewise, Pitt is willing to wager his serene, effortless stardom by playing someone whose open secrets would bring 2019 to its knees. These two actors are allowing Tarantino to completely deconstruct their careers, and that says nothing of the way Tarantino deconstructs himself. This is all secondary commentary to what Tarantino is really doing: he doesn’t see LA as a place that recycles tragedy for drama, but vice versa. His Hollywood is a self-perpetuating nightmare, an ouroboros feasting on its own corpse. This is a completely outrageous thing to come out of a major studio.

Perhaps you’re wondering whether or not I actually liked it. I did. This is a sincere version of Tarantino that I prefer to his high-end schlock. There’s an affection for these people, for this time and place, but he’s completely aware of its pitfalls, the venomous mix of free love hippies and commercial filmmaking. What he wants you to focus on is the downfall, and it’s telling that he seems to be calling to burn it all down. This feels like a tremendous feat of self-awareness, of reorienting priorities while still keeping your edge. It feels unique and polarizing, which is certainly not something you can say about Hollywood movies these days.

Written and Directed by Quentin Tarantino