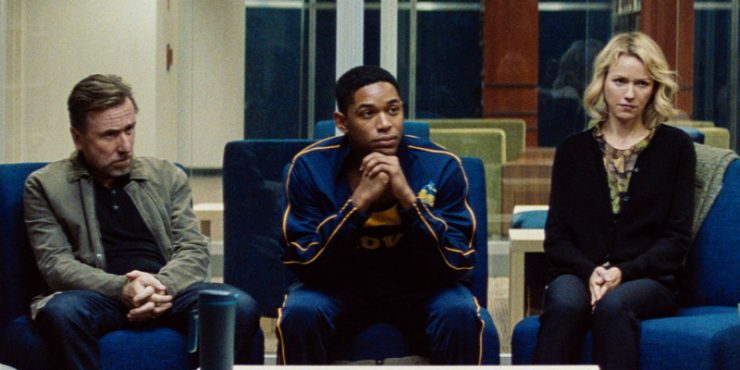 Who is Luce? You can watch the entirety of Luce, the new film from Nigerian filmmaker Julius Onah, and not really have a solid clue. The title character from this film is a touted high school student who succeeds in class, athletics, public speaking, debate club, you name it. In his senior year, he seems to be sailing straight toward an ivy league scholarship, amidst the support of teachers and fellow students who adore him. Luce is also adopted. At the age of seven, he was rescued from war-torn Africa, pulled from a life as a child soldier. Bouncing back from his harrowing origins, Luce’s story is an inspiring one of rehabilitation and reclamation, and Luce is about the way those kinds of stories can be quite manipulated.

Luce is played by Kelvin Harrison Jr., a young actor who has impressed in films like It Comes By Night and Of Monsters and Men. Luce is his first time that I’ve seen him have the opportunity to carry a film. The character, so dense and reflective, is hard to read, often a product of how all the other characters see him. This includes his white adoptive parents, Amy (Naomi Watts) and Peter Edgar (Tim Roth), who appreciate their son’s success, even more so because they saw the anguish that came from his initial transition to America. There’s also Harriet Wilson (Octavia Spencer), Luce’s stern history teacher. Ms. Wilson has a particular interest in Luce, and making sure he delivers on his potential.

Trouble brews when Ms. Wilson asks Amy to come into the school to discuss one of Luce’s assignments, particularly a paper in which Luce appears to parrot the philosophy of Frantz Fanon – specifically, that violence is a necessity in political activism. Amy and Peter would like to dismiss Ms. Wilson’s insinuations, but as the parents try to measure the consequences of confronting their adopted son on the aubject, miscommunications abound, and tensions between Luce and Ms. Wilson rise. As they escalate, disturbing facts about both Luce and Ms. Wilson start appearing, and misunderstandings turn into accusations which create ripple effects throughout the school and the Edgar family.

The intelligence of Luce‘s script (which is written by Onah and JC Lee) is its refusal to give any of its characters a free pass for ignoring painful truths. There are lots of things that these characters refuse to accept. Luce will not accept Ms. Wilson’s holier-than-thou standards for minority students, and the authority she assumes when trying to protect them. Ms. Wilson will not accept everybody’s lionization of Luce after her attempts to question his character. Amy and Peter will not accept any accusations against Luce. More than anything, it seems like the entire school staff refuses to accept the possibility that Luce is an everyday high school student, prone to mistakes and errors in judgment. Accepting that would foil their good feelings about Luce’s inspirational narrative.

These refusals of acceptance are aided by a refusal to talk about these disagreements, and that comes down to base of Luce‘s tensions: race. Ms. Wilson’s criticisms of Luce would be much easier to brush aside if she was not herself a black woman. In the war between teacher and student, Amy and Peter get caught in a political minefield, and its their hesitancy in making a judgment that leads to the film’s more unfortunate moments. They are not bad parents – Amy is perhaps too quick to discount Luce’s shortcomings, and Peter still harbors regret about not having fathered his own child – but their white guilt is paralyzing, and in that paralysis, too many unsaid things metastasize, and the consequences begin to mount.

I greatly enjoyed the provocative way in which Luce dug at the dangers of tokenism and the poisonous nature of white savior syndrome, even if its views on Frantz Fanon are a bit reductive and the film’s dialogue – particularly by the film’s third act – tends to lean a bit too heavily on Sorkinian speechifying. As a film, it’s more intriguing when its moralities are less clearly stated. The key to the film’s success is the film’s cast, which is exquisite. Watts is as good as the mother processing everything, as Roth is as the father who dreams about processing nothing. Spencer shows once again why she’s such a powerful performer, unafraid of Watson’s principles, as well as her vulnerabilities. I must also single out Marsha Stephanie Blake, who is tremendous in a small, but vital role as Ms. Watson’s troubled sister, Rosemary.

Above all, though, this is Kelvin Harrison Jr.’s film. His Luce is a charming but mercurial figure, who has grown adept at playing any part that people expect from him. He knows his circumstances and is willing to turn them in his favor. Onah keeps Luce’s true feelings and beliefs close to vest, and the character is often a projection to whoever he may be talking to. This sometimes works against Harrison sometimes, who can find himself playing several different characters, occasionally in the same scene. But Harrison always manages to play Luce in a way that is compelling, keeping the audience in the same state of imbalance that the Edgars and Ms. Wallace feel. It’s a remarkable performance, one that is in step with this challenging film’s premise.