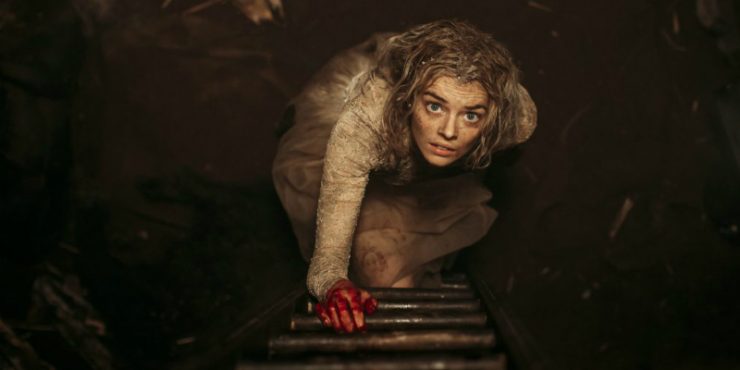 The billionaire family at the center of Ready or Not made their fortune from games. As the patriarch explains in a monologue near the beginning of the film, what started with one man selling playing cards turned into a titanic empire that owns four professional sports teams (good thing he explains this to a room full of people who presumably already know this information, because then I would have been left in the dark). We learn quickly what their favorite game actually is. The Le Domas clan prefers the most dangerous game of all, and the game’s most important participant learns about the rules at the most inopportune time.

Grace (Samara Weaving), a beautiful young woman, thinks she’s hit the jackpot when she gets married to Alex Le Domas (Mark O’Brien), a handsome, charming man who also happens to be filthy rich. Sure, his family seems eccentric, but being a former foster child, she’s willing to accept them and finally have a family to call her own. There’s Alex’s father, Tony (Henry Czerny), who oversees the La Domas industry and distrusts Grace’s intention. His mother, Becky (Andie McDowell), is nicer but a bit presumptuous. His sister, Emilie (Melanie Scrofano), is a cocaine-addicted ne’er-do-well. Only his brother, Daniel (Adam Brody), shares Alex’s disdain for the La Domas’ pomp and circumstance.

The young couple seems truly in love, which is why it pains Alex to explain to Grace a specific family ritual: at midnight of the wedding day, the newest person to the La Domas family must partake in a game. The game must be chosen by Grace from a collection of cards with a variety of options, including chess and backgammon. She chooses Hide and Seek, but quickly she learns the rules are much more different than she thinks. In a panic, Alex tries to explain to his new bride that in choosing Hide and Seek, Grace has volunteered herself to be a human sacrifice if she’s found by any member of the family before dawn. Having finally gotten a family, she must try to escape their elaborate fortress before they slaughter her.

I think if you pressed directors Marc Betinelli-Olpin and Tyler Gillett, they would say that they would have preferred Ready or Not to be a comedy first, and a horror film second. Alas, the film never quite reaches that Cabin in the Woods sweet spot, where the laughs and the scares meet a total equilibrium. Ready or Not‘s script (by Guy Busick and R. Christopher Murphy) is clever but oftentimes it compromises its characters to make that clever premise function within something like a plot. Much of the dialogue feels punched up and unnatural, and as the film moves along, its twists and turns are easy to expect. Even its attempts to skewer the perversions of the rich turns tepid when its opportunities are most ample.

All that said, if you allow it, it is possible to be won over by Ready of Not‘s charm, from its commitment to its ridiculousness, and despite (because?) the sloppiness of its writing. I think a lot of that can be attributed to the lead performance from Samara Weaving, which is both believably funny and frighteningly genuine. The Australian actress looks distractingly like Margot Robbie – in reality, she’s Hugo Weaving’s niece – but manages to stand out on her own, particularly in the film’s final set piece which pays off in effective, hilarious fashion. It takes Ready or Not nearly all of it’s running time to realize that it’s supposed to be funnier, but luckily Weaving understands that right from the beginning.