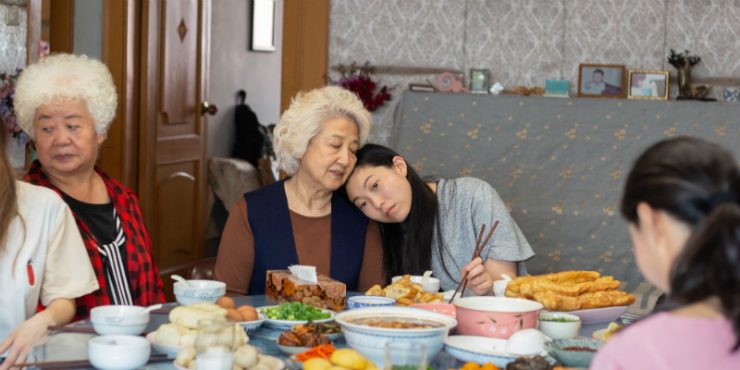 Everybody knows that they’re going to die. This knowledge accounts for a lot in life; some good, most bad. Our daily existence depends on how much we ignore it, planning for tomorrows that aren’t guaranteed. This knowledge is the key to The Farewell, the second feature film from writer-director Lulu Wang. Very coyly, the film opens on a card that informs us that the film is “based on an actual lie”, which sets us up for the modest ways with which Wang bridges the fictions we create in our lives with the realities of her film. It’s a film about performance, in life and in death, and how those performances – those lies we tell ourselves – effect us and those around us. It’s also about the consequences of these performances.

The “lie” is being told by the Wangs, a Chinese family that has found itself spread out across the globe. Billi (Awkwafina) has lived in America since she was six. Her father, Haiyan (Tzi Ma), left China with Billi and his wife Jian (Diana Lin), when he got a job as a translator. Now 30, Billi is floundering in Brooklyn, unable to pay rent, hoping for a Guggenheim fellowship, often finding herself back under her parents’ roof. Acclimated to America, Billi still harbors emotional attachments to her home country, and the nostalgia runs deepest when she gets to speak to Nai Nai (Zhao Shuzhen), her grandmother who still lives in China. The two speak often over the phone.

When Nai Nai is diagnosed with a terminal case of lung cancer, her younger sister, endearingly called ‘Little Nai Nai’ (Lu Hong), and the Wang family decide to keep the information from her, in order for her not to spend her final months in fear of death. Upon learning this, Billi can’t fathom the decision. Why not let Nai Nai prepare? Let her say goodbye? It’s explained to her how this is common practice in Eastern cultures, to carry the burden of mortality for the elderly, so they don’t have to. Despite this, the Wangs do contrive a hasty wedding in an attempt to wrangle the family together for Nai Nai’s remaining days. Originally, Billi is told not to come – there’s fear that she will reveal to Nai Nai her actual condition – but she gets on a plane anyway, to attend the “wedding”.

The charade sets the stage for plenty of tension and awkward comedy. Nai Nai, quite spry and energetic for a terminally-ill woman of advanced age, is spurred by the first gathering of her family in decades. Not only Haiyan, but her other son, Haibin (Jiang Yongbo), comes from Japan. It is Haibin’s son, Hao Hao (Chen Han), who is the groom in the sham wedding. Emotions run high, and some find performing for Nai Nai easier than others. Billi, the one most from separated from China and its cultures, finds it nearly impossible to reconcile the situation, not understanding what can be gained from keeping her grandmother in the dark. Regardless, the family goes along, in the hopes of giving Nai Nai one last family celebration before she gets even more sick.

The tradition of keeping deathly illness a secret from the ill is presented as commonplace in The Farewell, and Billi’s protests against it gives the movie opportunity to explain one of the bigger differences between the East and the West. But Lulu Wang (perhaps it’s telling that she uses her own family name for the family in this film) is too clever to make this a film about clashing cultures. Instead, it’s a film about a family unsure about how to confront something they always knew – in the back of their minds, anyway – would come. Understandings are met, even if complete agreement is not, and at the root of all their decisions is the goal of preventing Nai Nai’s terror, to shield her from staring directly at her mortality.

But how much does this strategy work, really? The Wangs’ sloppy attempts at withholding certain grim truths feel amateurish at best (they call the tumors on her CT scans “benign shadows”). You get the sense that Nai Nai is once again playing a part of ignorance for her family’s benefit, as she always has. Consumed by the wedding, Nai Nai pushes on, filled with such joy at her family’s presence that it hardly seems to matter that they all share solemn, disconcerting looks with one another. The family, too, indulges Nai Nai’s imperfections, her snap judgments and harsh editorials. Her matriarchal status goes unquestioned, even honored. This is helped greatly by Zhao Shuzhen’s performance (this appears to be her only film credit), which is filled with such inherent life and joy – a stirring portrait of a woman who would plan a party before her own funeral.

The characters in The Farewell have made a lot of compromises. They often accept and forgive out of convenience. The group of people we meet here have burdened and been burdened. Perhaps this is the definition of a family: a group of troublesome people you’re unable to escape from. There’s also a tenderness to this film, to the idea of loving someone despite – in some instances, because – of what they have saddled you with. The Wangs seem to universally love Nai Nai (though Billi’s mother may say differently), and so when she is at her most vulnerable, they perform. By the end, you can understand the nobility of the effort they all put forth, even if we understand Billi’s viewpoint. Life is too short to be consumed with thoughts of death.

Written and Directed by Lulu Wang