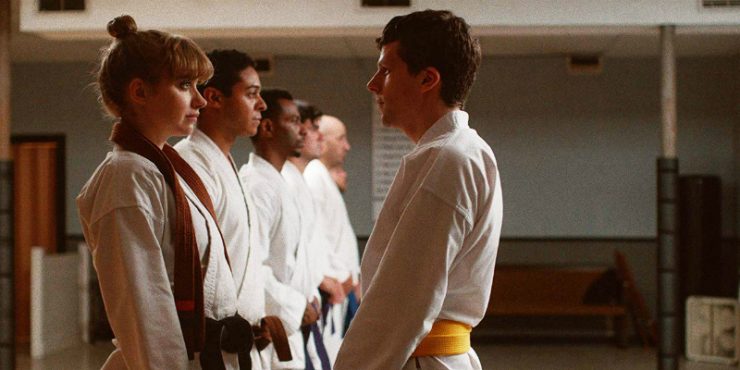 The roles of men within The Art of Self-Defense are all dual caricature: frightened nancy boys and fierce, strapping burlymen. Even a dog, a small dachshund with sorrowful eyes, is framed as an anxious coward. Another one of these cowards is Casey Davies (Jesse Eisenberg), a lonely accountant with seemingly no friends or family outside of said dachsund. At work, he’s basically invisible, and even when noticed is derided as a soulless company man. A man for the boss as opposed to for the people. Casey’s life becomes disjointed when he is assaulted by a motorcycle group who beat him into critical condition. After the experience, his fear grows exponentially and he must find a way to assuage it.

He decides to join a nameless karate dojo. He watches a class that is instructed by a man who goes only by Sensei (a perfect Alessandro Nivola). Sensei instructs with utmost seriousness, preaching karate principles not like philosophy, but like dogmatic principles. He encourages his students but does little to hide how difficult their journey will be. Casey joins up, enthralled by Sensei’s controlled intensity. Casey believes the classes can free him from his fears. Other students encourage Casey as well, though one student, Anna (Imogen Poots), does not. She is the best student by far, but a black belt alludes her. Her resentment toward her fellow students grows as they surpass her, and it only makes her sparring more ruthless.

Sensei takes a special interest in Casey, even though he’s only a beginner. He promotes him quickly from white belt to yellow belt, and even invites him to partake in the more skilled night classes, an honor not usually reserved for yellows. Of course, Casey soon discovers that the night classes – perhaps, unsurprisingly – are actually a sadist horrorshow, and Casey discovers the dark side behind Sensei’s enterprise. That doesn’t mean that Casey doesn’t take away from what Sensei has to offer. His confidence builds, he refuses to be pushed aside, he becomes frighteningly confrontational both at work and outside of work. His transformation from meek wimp to violent tough is a scary one to behold.

The whole thing is meant to be a send-up of toxic masculinity, which recalls the themes of another fight-happy satire, Fight Club. That film was more obnoxious but it felt less burdened by its message. Where Fincher finds sugary delight in these adult children, Art of Self-Defense writer-director prefers adroit deadpan – he doesn’t seem to believe any of these people can be real human beings. Neither film works for me, for much of the same reason. Its arguments against masculinity are valid, but the bloody passageways it takes to get there feel much too flippant. It sees the male problem mostly as a problem between males, even if both films throw in a token female, mostly for scale in the sense of insanity.

I don’t like Fight Club even though I recognize its status. It makes fun where The Art of Self-Defense makes tacit viewpoints. The straight-forward delivery of the dialogue may remind some of certain Yorgos Lanthimos films, but here it seems more rusty than dry. I’m not exactly sure what the robotic deliveries accomplish. Eisenberg and Poots are good, both in roles that suit their cinematic sensibilities, but it’s Nivola who truly shines as the deliberate but sinister Sensei. Stearns seems to get what these characters are, but the vehicle they’re in drives to nowhere. The Art of Self-Defense is a unique film, that’s not nearly as smart as it thinks. It says that men are monsters, but all we see here are robots.

Written and Directed by Riley Stearns