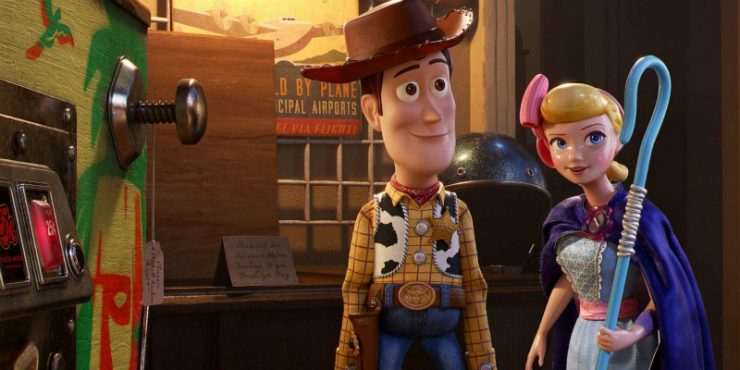 I remember a previous decade when Pixar was considered to be the best of the major Hollywood studios. The only mainstream film company interested in making consistently good films, who cloaked deep, moving stories within the ruse of being children’s entertainment. The studio made Finding Nemo, The Incredibles and WALL-E in the span of five years. Now, we’ve had Finding Dory, Incredibles 2 and for now, WALL-E has been left untouched by sequel-itis. There is no well that Pixar has visited more often, though, than Toy Story. The 1995 film was the starting point not only for Pixar’s major success but also for an entire revolution in commercial animated filmmaking.

It seemed to be a miracle that Toy Story 2 was good, and it seemed even more miraculous that Toy Story 3 was itself outstanding. So I guess we can’t blame them for this fourth installment, a film that would rather you forgot the incredible weight that came with the conclusion of the third film, which finished off the trilogy so completely and definitively, that the thought of Toy Story 4 then (in 2010) felt almost sacrilege. The key with this series is the length of time that they always seem to wait in between installments, allowing its fan base to reboot its enthusiasm. But the first film came out over two decades ago, and Toy Story fans are in their thirties. How much enthusiasm do we expect to be left?

Here’s some positive news: Toy Story 4 is actually quite good. It’s script (which has a comically long list of story credits, but is officially penned by Stephany Folsom and Pixar veteran Andrew Stanton) is a tidy one which picks up not long after the third film left off. Having moved on from college-bound Andy, Woody (Tom Hanks) and the gang now are the toys of Bonnie, a shy young girl who’s off to Kindergarten. On her first day of school, she decides to make a toy person using a spork and a collection of the classroom’s arts and crafts. The crude stick figure is dubbed Forky and becomes Bonnie’s favorite toy. Having transitioned from trash to toy, Forky (voiced by Tony Hale) is very confused about his purpose and needs Woody and everyone else to help him acclimate to his new existence.

There’s a lot that could have been made out of Forky’s existential confusion, though that is mostly just early filler until we get to the main plot, which is Woody and Forky falling out of the family’s RV and having to find their way back to Bonnie. Their journey is complicated by an old antique shop, a tyrannical doll named Gabby Gabby (Christina Hendricks) who wants to steal Woody’s voicebox, a pair of carnival prize toys named Bunny (Jordan Peele) and Ducky (Keegan-Michael Key), and the return of Woody’s old friend Bo Peep (Annie Potts), who has been living a renegade life as a lost toy, exploring the world with her three sheep in a skunk-shaped car.

Bo Beep’s return adds some excitement to Toy Story 4, with her independent, transient lifestyle presenting something that these films had never had before: a toy who had no interest in being a toy. She’s become much more resourceful since her days on the nightstand of Andy’s little sister. Her knowledge of the antique shop, the carnival, and the surrounding area, helps Woody and Forky (and eventually Tim Allen’s Buzz Lightyear) to get back to Bonnie. Their plans and schemes hit eventual bumps in the road, mostly from Gabby Gabby and her terrifying army of ventriloquist dummies, but as in all these films, the biggest conflict happens within the characters, as the toys make sacrifices for the happiness of their children.

Out of all the things that Toy Story 4 does correctly, it never totally succeeds in convincing you that it’s a necessary film. My enjoyment of it was mostly sentimental, and even while appreciating the newer elements (including Keanu Reeves as a Canadian motorcycle jumping action figure), it seemed to pale next the enormous gravity that came with Toy Story 3. As we continue to extend this series further along, it perhaps makes sense that this chapter feels more like a very good episode of television than a standalone film, and it speaks to how we’re expected to consume major movies these days. Nothing is sacred, everything can be added to, never feel complete.

What that discounts though, is how much people enjoy something new. I actually recall how awestruck I was when I saw the original Toy Story as a young child. Putting aside the obvious animation achievements, the premise behind the film was so stunningly perfect (yet, so simple) that it felt like a revolution – which it was. None of these sequels can compete with that, and by the fourth one, it doesn’t really seem like they’re trying. Toy Story 4 gives the expected charms, and maybe a few unexpected ones. The voices of Joan Cusack, Wallace Shawn, John Ratzenburger, and the late Don Rickles, return to great delight. It’s a perfectly satisfying experience, if not a particularly substantial one.