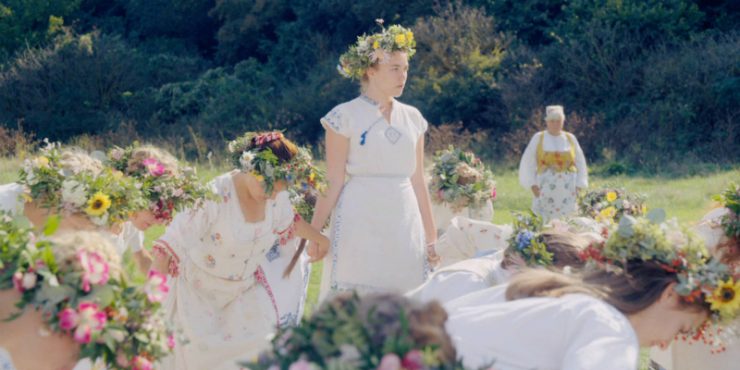 Ari Aster’s last two films – last year’s Hereditary, and this Summer’s Midsommar – are both bleak, complex stories about the human mind’s ability to process horror. Not simply odes to the horror genre (though they are that too), they are testaments for the way that horror makes you feel. This sort of expressionistic approach separates Aster from the rest of the recent filmmakers in this decade’s crop of prestige horror. The carnage in his films are felt deeply, by the characters within it, and by its audience. I was thoroughly turned off by the extremes in which I was made to feel the devastation throughout Hereditary, but perhaps it was the perfect preparation for Midsommar, which takes a much grander approach to similar themes.

It takes place during a Summertime celebration in the depths of rural Sweden, hours away from civilization. The days-long festival happens every ninety years and is comprised of various activities and rituals meant to pay spiritual dividends for this small but devoted Swedish community. Entering into the fray is a group of Americans seeking an exciting holiday, where they can learn new things from a secluded culture. There’s Christian (Jack Reynor) and Josh (William Jackson Harper), a couple of PhD students seeking to write their theses on simple, agrarian European societies, but there’s also Mark (Will Poulter), whose interest in the trip seems marginal outside of his interest in meeting beautiful Scandinavian women.

There’s also Dani (Florence Pugh), Christian’s girlfriend, whose anxiety and emotional dependency on Christian has put their relationship in a major slog. Besotted by a dysfunctional family, including a bipolar sister who frequently acts out, Dani’s only outlet is Christian. Unbeknownst to her, Christian has been looking for a way out of the relationship, and when Pelle (Vilhelm Blomgren), his Swedish classmate, invites him and the others on the trip, it seems like the perfect way to detach without trouble. Much like Hereditary, the actions and motivations of the characters are disrupted greatly early in the film by an unspeakable tragedy, so suffice to say that instead of leaving Dani behind, she instead becomes the fifth wheel on their trip to Sweden.

It isn’t long into their stay that things become unnerving. The Hårga – the commune-style community in which Pelle has invited them – is beautiful, almost paradisiacal, on the surface. The sun hardly ever sets because of the community’s Northern location, leaving all the people and events awash in gorgeous light, heightening the beauty of its pale-skinned, blonde-haired population. With the help of psychotropic drugs, the people of the Hårga wish to be one with their rural surroundings, to pay homage to everything that their god (or gods) has given them. Dani and the boys are happy, at first, to participate in this cheery, if mildly eccentric behavior, but when the truer, more sinister realities of this community rise to the surface, their idyllic getaway turns into a horrific terror.

Aster’s preoccupation with family trauma is apparent here as much as it was in his previous film. Both Midsommar and Hereditary treat grief, and the emotional dependency that comes along with it, as gateways into nightmarish dreamscapes of occult symbology and phantasmagoria. His stories seem to find a comfort in these underground factions, placing more credence in their warped logics, than the anarchy of real life. There’s a system, an illusion of control, within the rituals performed at Hårga, that appears superior to the random, senseless violence that plagues every day existence. It’s a bleak thing to see, as Aster’s last two heroines become consumed by the very things that attack them. To watch them assuage their fears and their feelings for a sense of comfort – no matter how upsetting – is the real tragedy of his films.

This film was more palatable to me than Hereditary, though I’m not sure I could really tell you why. Perhaps Aster’s aspirations felt clearer to me here. Both films are led by strong, heartbreaking actresses, with Pugh giving real feeling to the sorrowful Dani. It should be said that both films spend a lot of time in their third act luxuriating in their unnerving imagery, a practice I’m always willing to do without, but with Midsommar, Aster further confirms his mastery as a director, with a particular talent for framing images in order to maximize his audience’s discomfort. You are almost always seeing things at the exact moment that you should, and working within the quaint sub-genre of folk horror, Aster spares no ungodly sights.

I’m still debating how I feel about Aster’s own thesis. His numerous allusions toward burying unspeakable trauma underneath even more unspeakable horror doesn’t always feel straight to me. At times, he feels like a nihilist struggling to commit. Midsommer is the kind of film you’d hope would come from someone like Aster: confident, unflinching, larger in scope and with more to say. He’s stepping toward a type of horror filmmaking that is both intellectual and determined. So, why do his last two films feel like so much bluster? One day, Aster may make a film about someone forced to confront their grief without any ghosts or rituals to stand in their way, and that may end up being his scariest film yet.