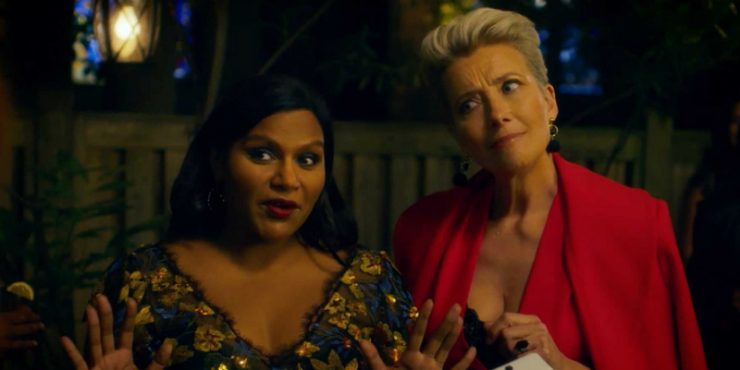 Late Night is a movie about a talk show host who is told several times to embrace political tension in order to make her show more relevant. It’s telling that the film doesn’t accept this mantra for itself. A major point in the film’s script – which is written by one of its stars, Mindy Kaling – is that the late night talk show host in question is a woman (played by Emma Thompson), which we all know has never actually been the case in American broadcast television. Late Night wants us to believe that an English woman would spend decades as a legend in the late night industry, but that we would feel for her the exact same way that we felt for Jay Leno, impressed by the staying power, but not exactly the comedic execution.

I would guess that Kaling’s script was meant to be a showcase for her, and she does play Molly, a spunky Queens resident who works at a chemical plant but harbors a love for comedy, especially for TV legend Katherine Newbury (Thompson). By manipulating the winnings of the company’s essay writing contest, Molly is able to get an interview to be a writer on Katherine’s show. The timing proves fortuitous, since Katherine has become so frustrated by her all-male writing staff, that she asks her staff head, Brad (Denis O’Hare) to hire a woman – any woman – who may be interested in the job. So that’s how Molly gets the job despite lacking any writing experience. To say the least, the rest of the staff has a mixed response to the new hire.

Some are openly hostile, some are sarcastic, and some or even supportive, though they uniformly withdrawal empathy. It’s Katherine herself who leaves the biggest impression on Molly. Katherine is brash, casual and piercing in her judgment and suspicious of seemingly everyone. The president of her network (Amy Ryan) has told her that this will be her last year as a host, because of declining ratings and a refusal to accept the realities of late night comedy. Katherine prefers to interview women like Senator Diane Feinstein and author Doris Kearns Goodwin, as opposed to viral YouTube stars. Her choices are viewed as off-base, and her comedy old-fashioned. Hiring Molly, Katherine hopes to get a perspective that could turn the show around, and maybe save her job.

Directed by Nisha Ganatra – whose most famous credits come from directing episodes of Transparent – Late Night has very little identity. Its humble style suggest a showcase for the performances, but the performances aren’t particularly good; or at least, Kaling’s script gives them very little to construct anything like a fully dimensional character. Thompson, a true legend in the movies, knows how to play Katherine’s icy cruelty, but it’s hard to ever buy her as a comedian in any form. Kaling, on the other hand, too often takes a backseat in her own story. Too often she falls back on her usual charms and her flair for self-deprecation, instead of actually tackling the complexities of her character. In the end, it’s hardly a compelling story of either woman.

Perhaps Late Night‘s biggest sin is that it simply isn’t funny, which is disappointing, because Thompson and Kaling are funny. We know this. How this film manages to defang these two is a bit of a mystery to me. It attempts to pass commentary on MeToo and sexism in show business, but it never takes more than a surface-level examination on any of these things. Plot points on its all-male writing team (which includes Hugh Darcy, Max Casella and Veep‘s Reid Scott), or Katherine’s ill husband, Walter (John Lithgow), resolve themselves almost as quickly as they’re introduced. In its totality, Late Night is a failure of mediocrity, a collection of solid talent that lacks all aspiration. My advice would be to watch Thompson in Howards End or Kaling in the “Diwali” episode of The Office (which are both on Netflix). You’ll get a much better (and more entertaining) idea of these actresses’ capabilities.